Bruce Wigo To Step Down As CEO Of ISHOF 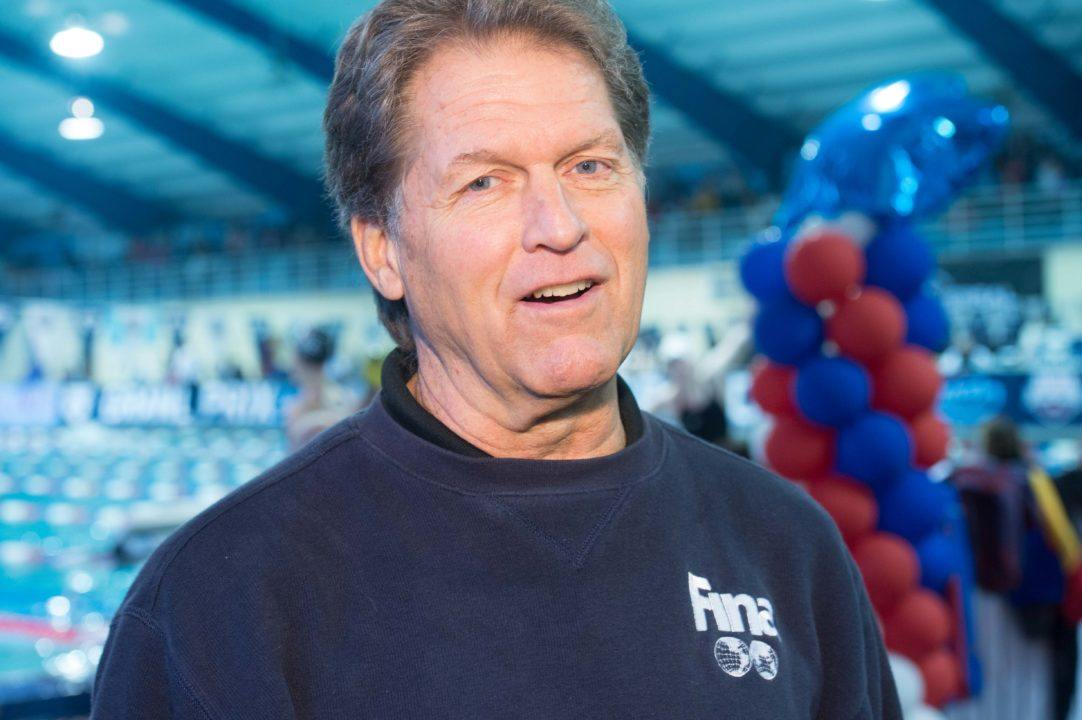 The International Swimming Hall of Fame announced today that Bruce Wigo will be stepping down as President/CEO, effective December 31, 2017. He has led the organization for the past 12 years. Archive photo via Mike Lewis/Ola Vista Photography

The International Swimming Hall of Fame announced today that Bruce Wigo will be stepping down as President/CEO, effective December 31, 2017. He has led the organization for the past 12 years.

In announcing Wigo’s retirement, ISHOF’s Board said in a joint statement: ““We have been so appreciative for the leadership that Bruce has brought to the International Swimming Hall of Fame over the past decade. Bruce has brought integrity to the daily operation of ISHOF and will continue with us on a part-time basis as a key staff contributor to the organization.”

The Board of Directors is in the process of defining the job description for a new CEO and forming a search committee chaired by board member Bill Kent.

“This has been both a difficult and an easy decision,” says Wigo. “I am so grateful to have had the opportunity to work with great people and to get to know some of the great names of aquatic history, like Alan Ford, Sammy Lee, Esther Williams, Sandor Tarics and Adolph Kiefer, to name a few of those who are no longer with us. But by stepping aside while I’m still relatively young and healthy, I look forward to spending more time with my children, grandchildren, family and friends. ”

One of the most knowledgeable individuals in the world about the history of aquatics, Wigo has agreed to remain as curator and be an information resource during the transitional phase of new leadership as the Hall of Fame moves forward.

“It is with great respect that I pay tribute to Bruce Wigo who has given his all to the International Swimming Hall of Fame,” added Donna de Varona, Chair of the Board. “Without his passion, persistence and love of aquatics I believe the International Swimming Hall of Fame would be a distant memory. Not since it’s founder Buck Dawson has our sport had such a loyal devoted professional. Buck created the hall to preserve our sports history and to honor those who have contributed. Bruce took the reins of leadership when the ISHOF was in trouble. We are now financially stable and have the opportunity to become one of the great sports museums in the world in both Fort Lauderdale and in the City of Santa Clara. It is my hope that the aquatics community, in recognizing Bruce Wigo‘s contributions finally steps up and supports our history which is rich in tradition, memorabilia and replete with role models.”

Wigo’s leadership helped steer ISHOF through difficult and challenging years of the early 2000s and oversaw governance restructuring, and recruitment of a new BOD and bylaw
changes. In addition, he:

Nobody better than Bruce at keeping the heartbeat of swimming history alive and well .
His passion for aquatics as it pertains to American and world events, past and present,
is top notch. Swimming will miss him. I wish him luck in his future endeavors.

Bruce Wigo has been a great supporter of ISHOF, swimming, and SwimForum, a group of 120 Olympians, and master swimmers in nine countries. Whatever he does next will be equally as dynamic and successful in leadership as in the Past. David McIntyre, Gold Coast Masters.

I miss him so much all ready