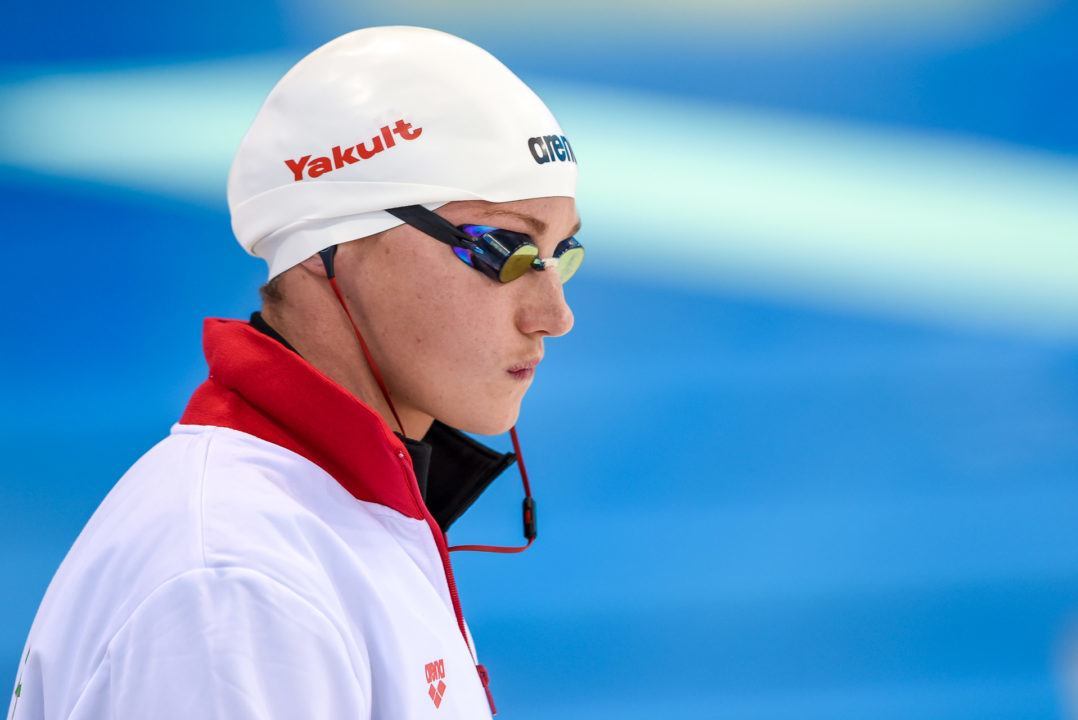 FINA will be limiting the number of races each swimmer will be able to enter per stop this year. The change will have a major effect on Iron Lady Katinka Hosszu's event schedule, after she entered nearly every race at nearly every stop last year. Current photo via Peter Sukenik/www.petersukenik.com

Today, FINA announced that it will be implementing changes to the structure of this year’s FINA/airweave Swimming World Cup in order to “attract more Stars (sic) and improve the exposure and visibility of this top level event.” One major change will be a cap of four individual events for each swimmer per World Cup stop.

Though the swimming’s international governing body didn’t frame it this way, the new cap on events is likely in response to the Hungarian Iron Lady Katinka Hosszu‘s absolute dominance in the series over the last few years. Last year, she picked up 73 golds, 23 silvers, and 9 bronzes in an event program that included just nine meets. Her swim-every-event strategy earned her a whopping $386,000 in prize money in 2016, $325,000 in 2015, and $389,000 in 2014.

Another change with the potential to shake up the event is a bit more difficult to parse out. In their press release, FINA says “Olympic and World medallists will have direct access to finals.” In its most limited interpretation, this could mean that a swimmer who medals at the FINA World Championships this summer in Budapest has the option of sitting out morning prelims of the event they medaled in and then bumping out the eighth-place swimmer for a free spot in finals. However, a more liberal interpretation could mean that an Olympic butterfly medalist from 1992 (cough, Gold Medal Mel) could potentially show up to the finals of, say, the 1500 free and have a guaranteed finals slot. (We have reached out to FINA for comment on this and will hopefully have clarification soon.)

Other changes outlined in the release include a maximum of 25 events per world cup stop, “enhanced sport presentation and TV production,” changes in the medal ceremonies, and additional on-site promotional activities.

You can read the full press release below:

FINA is happy to present the 2017 edition of the FINA/airweave Swimming World Cup, which will incorporate a series of innovations, aiming at attracting more Stars and improve the exposure and visibility of this top-level event.

Held between August and November, this year’s competition (in 25m-pool) will comprise nine legs in accordance with the following circuit:

The main improvements, to be implemented as soon as this year, focus on:

Thanks to these new features, which received favourable feedback from athletes and coaches, FINA hopes to definitively consolidate World Cup’s status as the most important swimming event outside the frame of the FINA World Championships and FINA World Swimming Championships (25m).

“Our goal is always to organise great events with the presence of our Stars. Giving them additional recognition and visibility will certainly foster their participation and involvement with the FINA/airweave Swimming World Cup. The continuous support of prestigious cities, with emblematic venues, is also a guarantee of success for this fundamental competition in our calendar”, said FINA President Dr. Julio C. Maglione.

Fina should have waited for Katinka to retire to change the rules. Part of the attraction of these meets is guessing how many events she will win. The swimmers should ban together in support of Katinka and boycott the first three stops. She’s being penalized for being too good. When you get too good we change the rules. This is just bad for swimming. ?

A swimming federation which FORBIDS people to swim more??? What kind of message do they want to send? That you should not work hard, swim hard? This is outrageous, I can’t find words to describe how shocked I am. I whish there was a way to overturn this somehow. Would be good to teach those FINA bureaucrats a lesson.

This can be the beginning of the end and I’m not speaking about Katinka.

Regardless of whoever it is, this is clearly a discriminative measure against an athlete. Or more. What if others are about to follow her pattern, let’s say Ikee?
It’s really time to get rid of these old bureaucrats. They cannot even swim.

I don’t think it’s discriminatory. The rule applies to everyone in the same way.

Theres a possibility it might encourage a better athlete turnout at some of the legs on the basis that there won’t be the blanket dominance of a couple of swimmers we’ve seen in the past. I know a few (very good) swimmers who have decided it’s not worth attending, given the travel expenses, as the likelihood of them making enough money to justify it is pretty low. Hopefully it could make for a more interesting and competitive series overall, particularly in relation to the final points total. All of this does demonstrate just how good Hosszu is though!

There are rules that apply to everyone, speed limit, tax, …etc. This is exceptionally discriminative. Just think about it. Really matters e.g. that Katinka is swimming all the breasts? No way.

Seems like a blatant attempt to foil Hosszu. I guess she isn’t favored among the FINA decision-makers.
Reminds me of the FIS changing the rules to keep Stenmark from winning the overall skiing world cup. Apparently the powers-that-be can’t stand a day-in and day-out consistent winner, especially one from a country that is not a traditional powerhouse in the sport. I rather like to see supreme dominance. It doesn’t last forever, but it’s fun to see, like KL. Oh, I suppose next thing you know they won’t let KL swim more than 2 free events at one meet because she beats up too much on their favorites.

Why do I think it has to do with Hosszu removing Tamas Gyarfas (FINA vice-president (!)) from the top of hungarian swimming presidency?

I simply don’t know what was their main goal because there won’t be more illustrious swimmer after this decision, too. Otherwise Katinka (or any other swimmer) can win 304k USD after this, too.

This is dumb because you’d need to first consider the likelihood that there will always be a Hosszu in the sport. That’s like moving the outfield fences out in baseball because Barry Bonds hit 73 home runs in a season once. She’s unique. You don’t change a rule around that.

Hozzsu just took a big pay cut. 9 meets X 4 events X $1500 is only $54000. We need to know about the bonus amounts. Way to piss off your star right before her big meet this summer!

Also they need to address the high of cost of travel to these remote locations. You need to win all four events to just break even lol

I don’t know how it works out overall, but maybe doing fewer events would let her target more WR bonuses? She’s been really close on lots of occasions. Maybe focusing her energy on 2 events a day could result in her hitting more of these bonuses and making up the shortfall. A big “what if” though – those times are obviously not slow.

And 100k for the overall winner.

Doesn’t seem fair to Hosszu. She works hard to be that versatile and dominant. She should be able to collect good money, like great pro athletes in other sports.