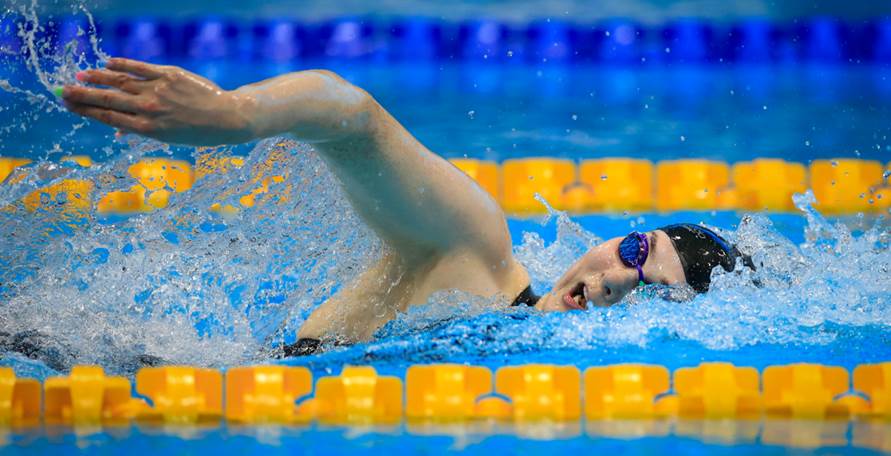 The British women's 4x100m freestyle relay made history tonight in Budapest, reaping gold at a European Championships for the first time since 1927. Archive photo via Georgie Kerr, British Swimming

The women’s 400m freestyle relay brought the virtual house down on day 1 of these European Championships, with the back-and-forth battle among the top 2 teams being brought all the way to the wall at the end.

Touching first was the powerful squad from Great Britain, with the foursome of Lucy Hope, Anna Hopkin, Abbie Wood and Freya Anderson collectively clocking a massive result of 3:34.17.

That edged out the stacked Dutch quartet of Ranomi Kromowidjojo, Kira Toussaint, Marrit Steenbergen and Femke Heemskerk, who snagged silver only .12 behind in 3:34.29. That was despite a valiant effort from Heemskerk to catch Anderson on the final leg, with the Dutch ace clocking 51.99 for the fastest split of the field.

GBR lead-off swimmer Hope also nailed a new Scottish national record with her 53.89 front speed. That demolished her previous PB and national record of 54.19 from just this past April to help be the gamechanger for Great Britain. Wood’s 53.90 is also a head-turner for someone also capable of crushing a 400m IM time of 4:37.25.

France rounded out the top 3 tonight in a time of 3:35.92, with Charlotte Bonnet reaping the fastest split on the squad in 53.36 as the 2nd leg.

Going back to GBR, the foursome here overtook the previous British national record of 3:35.72 from the 2014 Commonwealth Games. That squad was comprised of the following women compared to this new record of 3:34.17.

The last time the British women won this 400m free relay event was way back in 1927, which was just the 2nd European Championships ever held and 1st edition where women could race. Coming into this meet, the Dutch women have the best result in this race, owning 8 gold medals and 25 total pieces of hardware over 33 editions.

Also of importance for the British women is that they desperately needed a big-time swim here to establish their case for getting a ticket to this summer’s Olympic Games. The British Olympic Selection Policy dictates that a collective time of 3:35.64 needed to have been achieved to book a Toyo ticket, so the women managed to get it done in spades tonight.

It’s unprecedented that the Dutch team has essentially had the same two legs since 2007 and has won a boatload of medals.

I mean, the fact they’re described as vaunted is because we, as swim fans, talk about them in such glowing terms, so it isn’t really debateable… Go off though 🙃

the dutch dominated this event from 2008-2011, which included 2 WRs along with minor medals in 2007, 2012, 2013, 2015 and 2017. only australia has been more dominant in recent years. That and the fact that the strong legs of their current relay team have had incredible longevity. calling them a vaunted team is well justified

reminder that this is the european championships, which means none of the teams who finished ahead of the dutch in 2019 are competing here 🙂

For the Dutch team, both Toussant and Steenbergen were faster during prelims (0.55+0.18) for a total 0.73 of a difference.