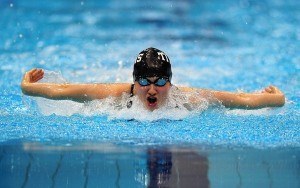 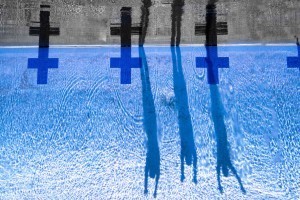 Day 2 of the British Summer Nationals #BSC2015 at Ponds Forge  has seen more impressive racing and records broken. The best of British age groupers are in action and competition between the top clubs is close. City of Leeds is leading after the Finals session with 6 Gold, 1 Silver and 2 Bronze but they are being chased closely by Plymouth Leander and Stockport Metro.

Andrew Mullen (Ren 96), fresh from his Bronze medal winning performance at the IPC World Championships, set a new European record in the S5 50m Butterfly in a time of 36.56. Mullen is building towards the Rio Paralympics in 2016 and looks to be in top form.

Hannah Russell (Woking) a fellow IPC World Championship team-mate of Mullen claimed Gold in the MC 100m Backstroke, swimming an outstanding 1.06.75, only 0.5secs from her own World Record.

Tamzin Pugh of Ellesmere College had a hectic evening which began with a brilliant performance in the 800m Freestyle final heat. Pugh finished 2nd overall behind Ellie Jones (Swansea Aquatics) but took the Gold for the 15 – 16yr Age Group. Showing excellent recovery and fitness she followed up with a win in the 100m Butterfly in a time of 1.00.43. This takes her medal count to three for the Championships so far. Tamzin will compete for Team England at the Commonwealth Youth Games next month in Samoa.

Perhaps the closest race of the evening was the Men’s 19yrs+ 50m Breaststroke with less than 13 100th’s of a second separating the podium finishers. The ultimate victor was Lawrence Palmer  27.87 (Puttering Swimming Club) over Andrew Weatheritt 27.97  (Loughborough University) and Evan Inglis 28.00 (Edinburgh University). Another highlight in the 50m Breaststroke included  Callum Smart (City of Oxford) breaking his own British Record to set a new standard of 30.32 for 15yr old boys.

Alys Thomas (Swansea Aquatics) celebrated a milestone in her swimming career, breaking the 1min barrier for 100m Butterfly in the Final of the 19yrs+ event.

Luke Greenback (Cockermouth) won the men’s 200m Backstroke posting a 2:00.64. Greenback, a World Junior Record holder and European Games medalist, is preparing for World Junior Swimming Championships in Singapore next month, and while there’s no scoffing at a two-double-oh from a junior swimmer, he’s historically been faster in the leadup to big meets. He’s currently in a pivot, though, from the European Games, where he swam a 1:56.8 lifetime best.

The action continues on July 30.