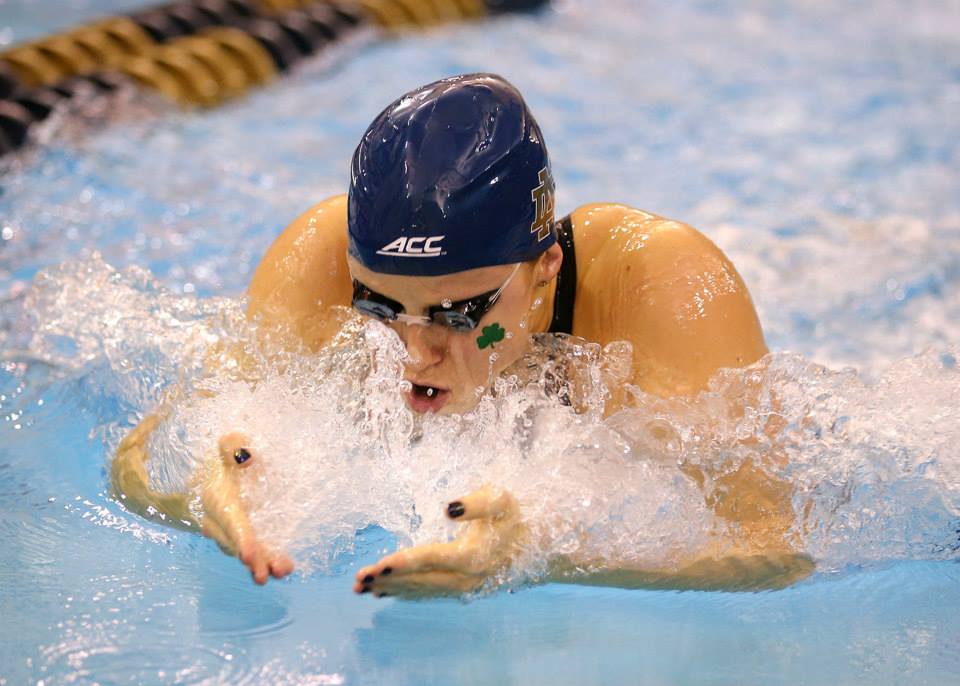 NOTRE DAME, Ind. – The University of Notre Dame women’s swimming and diving program had plenty of representation on the international stage this summer, as recent graduate Emma Reaney won a bronze medal at the World University Games in early July before freshman Sofia Revilak logged personal bests at the Pan American Games in mid-July.

Reaney, who is training for the 2016 Rio de Janeiro Olympics with SwimMAC Elite at the SwimMAC Carolina facility in Charlotte, North Carolina, participated in the 50- and 100-meter breaststroke events at the World University Games in Gwangju, South Korea.

After finishing 10th overall in the 100m breast (1:08.90), Reaney turned in an outstanding performance in the 50m breast, as she cruised through the prelims and semifinals to ultimately take bronze in a career-best time of 31.11.

“I was pretty disappointed in my 100, so to be able to turn it around and have a good 50 where I contributed to the medal count for the USA and got a best time was incredible,” said Reaney.

The medal was the Lawrence, Kansas native’s first individual medal on the international stage. Last December, Reaney won silver and set an American record with the 4x50m medley relay team at the FINA Short Course World Championships in Doha, Qatar.

“The World University Games were so incredibly fun,” said Reaney. “I had an absolute blast and I will never forget that trip. The meet was so well organized and the Koreans were the friendliest people I’ve ever met. I made lifelong friends on that trip and got to represent my country, so I’d say it was a success.”

Now that the World University Games are over, Reaney will turn her attention to the Phillips 66 National Championships set for August 6-10 in San Antonio, Texas. There she will compete in the 200m IM and the 100m and 200m breast. She enters seeded second in the 100 breast and seventh in the 200 breast.

“I’m really excited about San Antonio,” said Reaney. “Practices have been going really well these past couple of weeks and the pool is new and supposed to be beautiful. We received our schedule a couple weeks ago and there are a lot of World Cups, Pro Series and training trips coming up for SwimMAC in the next year. I don’t know exactly which ones I’m doing yet, but it should be exciting!”

As Reaney navigates her first summer as a professional after an historic four-year career under the Golden Dome, Revilak is just getting her Irish career started.

After qualifying for the Pan Am Games in April, Revilak opened the games with the 100m butterfly before swimming in a leg of the 4x100m medley relay.

In the 100m fly, Revilak finished second in the B final and 10th overall with a lifetime-best time of 1:01.16. In the medley relay she swam the fly leg in helping Mexico take fifth overall in a Mexican-record time of 4:08.26 (long course).

“It’s hard to put into words because you are representing an entire country,” said Revilak. “You are putting on a uniform and a cap and you are a reflection of what your country represents. You have to step up and do the best you can, because whatever you do is a reflection of your country. It creates an insane amount of pride and excitement.”

Born in Mexico, Revilak moved to Fairfax, Virginia with her family when she was four years old. She lived in Virginia for about 11 years while her father completed doctorial work at George Washington University. As a high school freshman at Battlefield High School, Revilak won a pair of state championships while earning All-America honors with her 200 medley relay teammates. The family moved back to Mexico following her freshman year in high school.

“Coming into the Pan Am Games I remember being so relaxed because I had competed on an international stage before,” said Revilak. “It really gave me a chance to focus on what I needed to do instead of worrying about being nervous. I’m really glad I had those opportunities.”

Revilak will next swim for the Irish at the Phillips 66 National Championships. There she will compete in her specialty – the 100m fly.

The duo is just the latest in a long line of Irish women’s swimming standouts to compete on the international stage. Jilen Siroky swam for the U.S. at the 1996 Atlanta Olympics, while Christel Bouvron competed for her native Singapore at the 2000 and 2004 Olympics. Others to swim internationally include Erin Brooks, Katie Carroll and Natalie Burke.