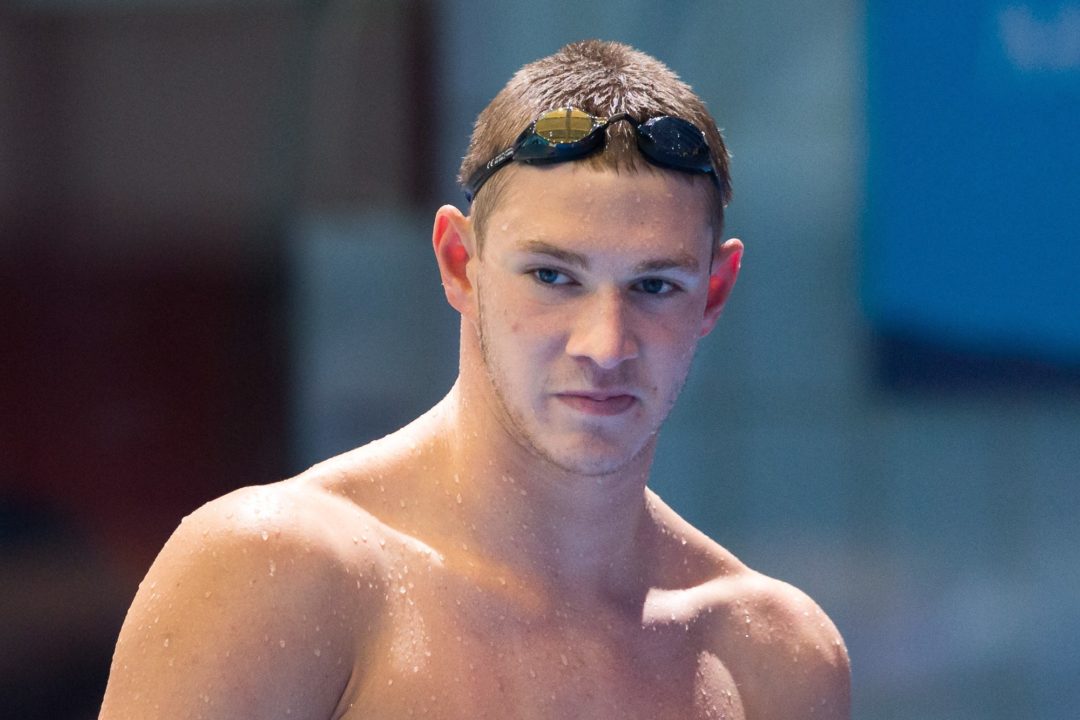 The relatively new 4x100m mixed medley relay brought another world record for the Americans as they took the top seed heading into tonight's finals where they're the favorites for the gold. Archive photo via Tim Binning/TheSwimPictures.com

The relatively new 4x100m mixed medley relay brought another world record for the Americans as they took the top seed heading into tonight’s finals where they’re the favorites for the gold.

The team that comprised of Ryan Murphy, Kevin Cordes, Kendyl Stewart and Lia Neal broke the previous 3:44.o2 world record held by Great Britain that they set back at the 2014 European Championships.

That record has yet to be officially recognized by FINA who listed Australia’s 3:46.52 from January of 2014 as the official world record heading into the World Championships. Due to the unrecognized record, the Russian team officially broke the world record with a 3:45.87 in heat two before the Americans re-broke it one heat later.

Murphy was sublime, leading out with a backstroke split time (52.18) which would have secured the gold medal in last night’s individual 100m backstroke final. Murphy’s swim was the fifth fastest 100m backstroke performance ever and makes him the fourth fastest performer all time in the event.

Great Britain placed 2nd in heat three with a 3.44.39; a full second faster than the Russian’s time from heat two.

In the fourth and final heat Germany posted a 3.45.39, which had they drawn an earlier heat would have also been under the previously recognized world record.

All of the top three teams swum their two male athletes first (backstroke and breaststroke), followed by their two female athletes (butterfly and freestyle). The final is shaping up to be a very exciting event. The teams proceeding to the final are:

With all these strong teams head-to-head, one can’t help but feel the WR may be under threat once again in the finals.

I think the US coaches take very seriously these mixed relays. Like Russia. It’s a good way to improve a sad number of medals so far for these 2 nations.
I wouldn’t be surprised if they put Cordes and Manuel tonight in final.
A little weird to put your best swimmers in an useless event like that one.
I’d prefer to see them rest for their individual swims but that’s the way it is. USA badly needs gold medals.
And then some fans will compare to the medals tables of the previous world championships when there were no mixed relays….
Don’t get me wrong. I’m happy to see Murphy swim 52.18.But I’d prefer to see… Read more »

Who was saying college swimming was holding the younger swimmers back? This is proof that it’s dependent on the swimmer and how they were coached, not whether or not they swim in college.

I agree. And I’ve never said college swimming killed the careers.
I just note the different cases.
Some kids see their long course progression stop when they swim in college. And we have to wait they turn pro to see them improve again. But 4 years, it’s long. While the other 18-year-old swimmers in the world continue to improve. Look at Shields or Meili. They have developed their long course once they had finished their college careers.
And some other kids, in contrary, reach another level while they train in college.
Cal girls. A disaster. Missy’s backstroke has disappeared, Bootsma, Pelton, Runge and Garcia have disappeared. Hopefully the same doesn’t happen with Baker, McLaughlin and Bilquist… Read more »

Good thing we’ve never had a swimmer lead off a relay at World Champs in a time that would’ve won an individual gold medal.

Ugh. Welp, at least I was looking forward to what Murphy’d do on that relay! Wonder if he’d have helped the free relay, too…

Give murphy a dive and a rolling start and he wouldn’t be too far off that 49.69 swimming backstroke…

Like a number of other countries, not bothering with this event. They are on the entry list for the mixed FS relay but whether they actually line-up on the day remains to be seen.

Changing of the guard in backstroke

Ryan Murphy is without a doubt taking something he should not be taking…..