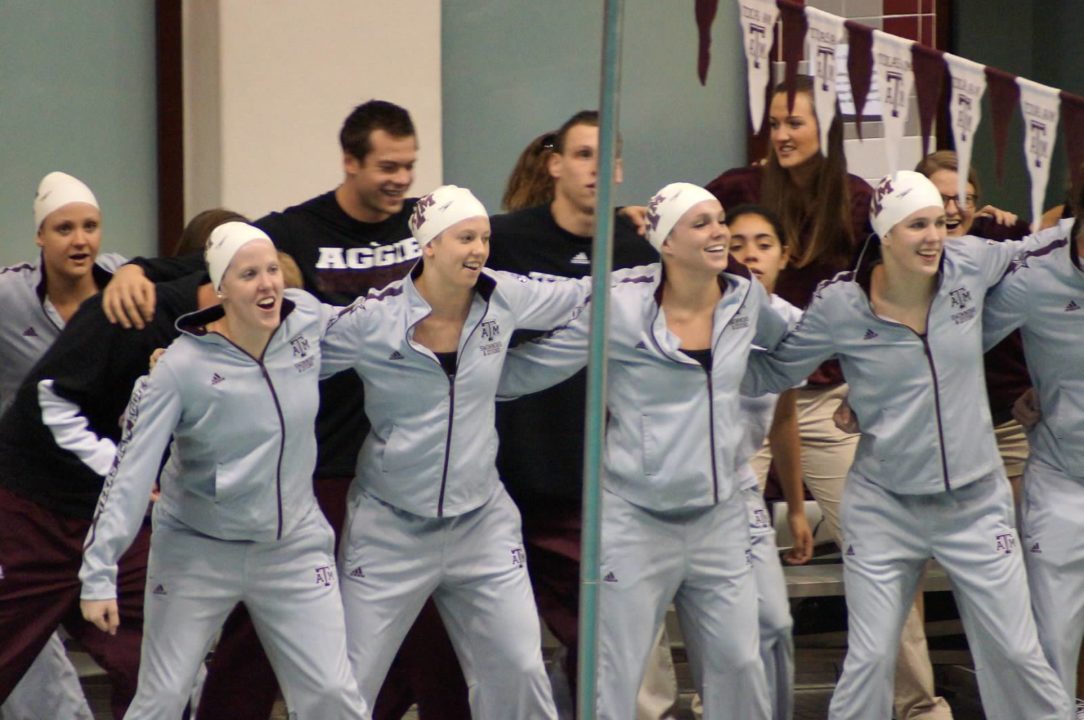 The Texas A&M Aggies continued a successful first season in the SEC on Saturday by toppling the LSU Tigers. (Photo Courtesy: Liz Dittmer)

The A&M women dominated the LSU Tigers 179-107 on Saturday in College Station, while the Aggie men won a hard-fought SEC battle against their male counterparts 158-140 on Saturday.

The women’s meet started with a solid 1:40.54 200 medley relay swim from the A&M women to take a two-second victory over LSU (1:42.61). The A&M women won every phase of that race (including some great exchanges), but Breeja Larson maybe showed her first hint of fatigue this season, splitting just 27.99 on the Aggies’ 200 medley relay (with “just” being a relative term). She’s been more-typically a 27-low-to-mid on this relay, including a 27.5 against Incarnate Word the day before.

She looked much, much better the rest of the meet, however, putting up a 59.77 in the individual 100 (splitting 28.32/31.45), and a 2:08.72 in the individual 200 breast. Larson has become so incredibly fast, that she makes sub-minute 100 breaststrokes look easy. This was her 6th-time under a minute this season; she pulled the feat off 7 times in the 2011-2012 season as a sophomore, and this year she still has at least four championship-level swims (SEC’s, NCAA’s), plus a pair of dual meets. We could see her crack 60 seconds as many as 12 times in one season this year.

Senior Rebecca St. Germain, who head coach Steve Bultman is counting on picking up a significant scoring load at NCAA’s this season, performed well against her old team. The LSU transfer picked up wins on both springboards.

The Aggie women swept the 16 events of the meet.

The men’s meet was much more competitive. LSU opened the racing with a win in the 200 medley relay in 1:29.89. LSU’s top swimmer, Andrei Tuomola, split a 24.37 on the breaststroke leg, which is where A&M is the weakest; that was the difference makers with the Aggies coming in 2nd in 1:30.60. A&M’s best split was a 21.38 fly split from Hendrik Lindau.

LSU would take the second event of the night as well, as distance All-American Craig Hamilton won the men’s 1000 in 9:20.89.

The A&M men woke up a bit in the next race, the 200 free, where they went 1-4, including a pair of 1:39’s from John Dalton and John Wagner, the latter of whom continues to swim well in this race despite being called on as the Aggies’ top sprint breaststroker this year as well.

LSU won a lot of races, including Tuomola out-touching Dalton 20.38-20.39 in the 50 free, but a great late push from the Aggies that including taking 1st, 2nd, and 3rd in the 400 IM (3:59’s from Simon Frank and Omar Enriquez) plus a dominating win in the 200 free relay would seal victory for A&M. The Aggies’ 1:19.98 in the 200 free relay is not only a season-best by over two seconds, it’s easily the best spark this team has shown in the 2012-2013 season. An Aggie team that has been sluggish much of this year might be able to build on that relay for a good championship season.

The relay included a 19.56 on the 2nd leg, Hendrik Lindau impressed with a 19.9 on the 3rd leg, and freshman Cory Bolleter had the best swim of his young college career with a 20.08 anchor.

Overall, both men’s squads performed very well at this meet, and I think both teams will feel very confident with their times as they head toward the SEC Championships that are now just a month away.

Breeja is the the star of breast now in The Usa it seems ! great job

You forget a little quickly Rebecca. Breeja still has everything to prove in long course and especially in the 200 to be named star of the breast in USA. But perhaps it will be for the next summer.

It seems a sub minute is now very usual for many swimmers. It isn’t a big deal anymore. Like many other barriers we must reconsider.