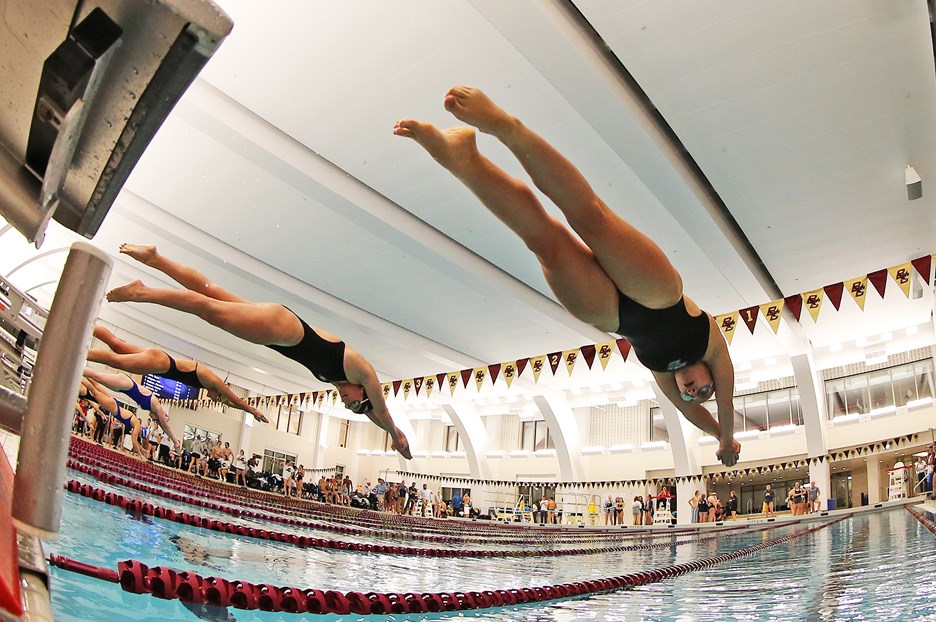 Boston College spoiled Bryant's season-opener by sweeping the Bulldogs on Friday. The Eagles won 177-121 on the men's side and 194-106 on the women's side. Current photo via Boston College Athletics

SMITHFIELD, R.I. — The Boston College swim and dive team took their second straight overall win this weekend as both the men’s and women’s teams topped Bryant on the road. The women won with 194 total points to Bryant’s 106 while the men combined for 177 to Bryant’s 121.

MEN’S HIGHLIGHTS
– Newcomers Zachary Szmania (1000 freestyle, 500 freestyle), Matt Szekely (100 butterfly, 200 freestyle) and Dale Nickerson (one- and three-meter dives) were each multi-event winners.
– Damion Geoghegan Ribeiro placed first in the 50 freestyle, finishing in 21.64.
– Michael Hinton earned the top spot in the 100 freestyle with a time of 47.84.
– The team of Hinton, Zander Santana, Sam Roche and Max Threlkeld combined for a first-place finish in the 400 freestyle relay with a final time of 3:08.98.

UP NEXT
The Eagles continue their road stretch with trips to Baltimore and Washington D.C. this weekend, as they take on both Loyola Maryland and George Washington University.

The Bryant University women’s swimming and diving team fell to Boston College, 194-106, in its first meet of the season on Friday night.

The Bulldogs continue their season-opening three-game home stretch next Friday night when they host Providence College.