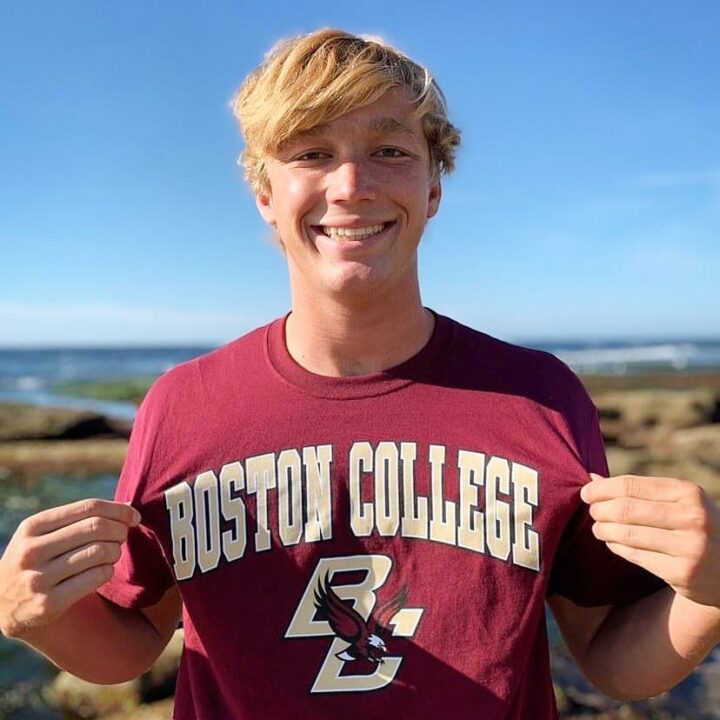 Davies will join a young backstroke group that has already helped Boston College to get off to one of the team's best starts in recent years.

A backstroke specialist, Greyson Davies has announced that he will be making the move from El Cajon, California to the East coast next fall, committing to join Boston College.

In August, Davies competed at the Summer Championships-West representing his club team, College Area Swim Team. At that meet, he hit a Junior Nationals cut in the 200 back during prelims, touching in 2:06.34. He was slightly slower during finals, finishing in 2:07.02 to take 14th. He also added a 16th place finish in the 100 back in a time of 58.69. His best time in the long course 100 back happened a week earlier, at the Futures Championship-Santa Clarita. There, he hit the Juniors cut in the event in a time of 57.78.

Boston College finished last out of the 12 teams in the conference at the 2021 ACC Swimming and Diving Championships. The team’s only individual points came in the 100 backstroke, with junior Samuel Roche finishing 19th in the event. At the meet, it took 47.50 and 1:45.29 to qualify f0r finals in the backstroke events.

This season, Boston College has a very young backstroke group, lead by a pair of freshmen in Michael Horkan and Roger Brown. Horkan leads the team this season in both events, having gone 49.32/1:48.57 at the Terier Invite earlier this year. Brown is the second fastest on the team in the 200 and third fastest in the 100. Davies will have three years of overlap with the pair when he arrives on campus next fall.

Boston College has been having a big season this year, having dominated the Terrier Invite at Boston University. Between the men’s and women’s team, 23 school records were set.