The Book That Recounts the 112-Year History of Princeton Swimming, and the Origins of Intercollegiate Swimming 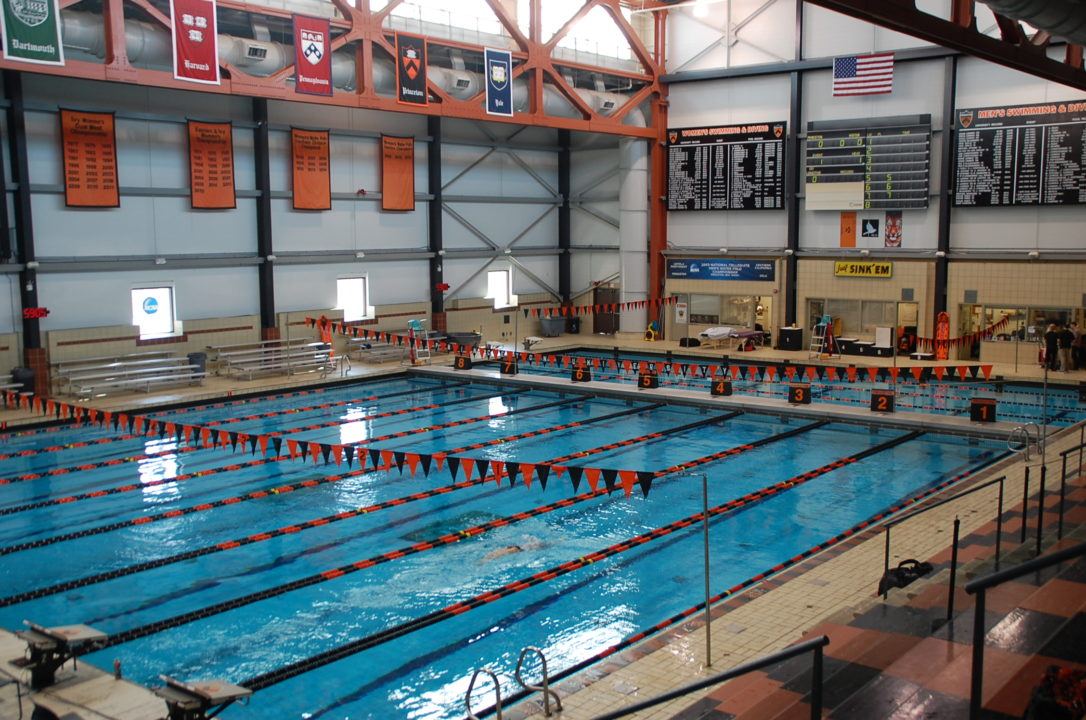 Princeton wasn’t the first American university to field a collegiate swimming team, that honor goes to Penn, but it is...

Princeton wasn’t the first American university to field a collegiate swimming team, that honor goes to Penn, but it is one of the few than can boast a 112-year history. And that’s just what Sanford “Sandy” Thatcher, who swam for Princeton in the 1960s, set about celebrating when he first published A History of Princeton Swimming and Diving, including the Story of How Swimming and Diving Came To Be an Intercollegiate Sport for Men and Women in the United States on the occasion of Princeton’s 110 year anniversary celebration in 2014.

After his graduation from Princeton in 1965, Thatcher had remained involved as the long-serving secretary of Friends of Princeton Swimming and Diving. In the 1970s he became interested in the lore of Princeton’s storied swimmers and coaches, about whom he wrote articles for the Friends’ newsletter. On the occasion of Princeton Swimming and Diving’s 100th anniversary, Thatcher (a former editor-in-chief of Princeton University Press and former director of Penn State University Press), gathered the notes he had taken over the years, added scores of new interviews, and published the book through Penn State Press, making it available free of charge to the public. You can download the book here.

The book is a fascinating read, whether or not one has ties to the institution itself. Thatcher begins by describing the formation of the Associated Metropolitan Swimming Clubs of London in February 1869, which formalized swimming as a competitive sport. He then recounts the very early days of intercollegiate swimming in the United States, when meets consisted of “50 yards swim, Fancy Dive, 220 yards swim, 100 yards swim, and the Plunge for Distance.” At that time, the New York Athletic Club was the team to beat in the east, while the Chicago Athletic Club was the west’s top team. Ivy League teams were among the nation’s most competitive in the 1950s and 1960s. “In 1962, for instance, Princeton placed 5th in the NCAA Championship while Yale was 8th and Harvard 13th. In 1963, Yale was 2nd, Princeton tied for 9th, and Harvard 10th. In 1964, Yale was 3rd and Princeton 9th.”

Thatcher spends a good deal of time outlining the development of women’s competitive swimming. One learns, for example, that female swimmers at the 1920 Olympic Games were the “first women to achieve full Olympic status” and that they competed in just three events: “the 100- and 300-meter freestyle races and a 400-meter relay.” Women’s collegiate swimming, along with other sports, got a big boost with the 1971 founding of the Association for Intercollegiate Athletics for Women (AIAW). Princeton, in particular, had recently gone co-ed, and dedicated resources to developing women’s sports. Notably the university hired Merrily Dean Baker as women’s athletic director; she turned out to be a strong supporter of the women’s swimming and diving program.

The book delves specifically into the history of Princeton’s men’s and women’s teams and their coaches. Thatcher has gathered reflections from athletes and coaches that stretch, remarkably, from 1906 to the present. He quotes a member of the class of 1954 who says, “Swimmers today may not know that the team back in those days practiced in the nude all the time.” He includes Olympians (such as Jed Graef, Ross Wales, Dan Veatch, Nelson Diebel, Juan Valdivieso, Doug Lennox II, Brian Tay, Cathy Corcione, Sangeeta Puri, and Carwai Seto) and American record-holders (Charlie Campbell, the men’s 200 medley relays of 1989 -Mike Ross, Rich Korhammer, Ty Nelson, and Rob Musslewhite- and 1990 -Ross, Leroy Kim, Nelson, and Erik Osborn- as well as Corcione), and provides hyperlinks to many race videos.

Thatcher ends with sections on facilities, traditions, notable S&D alumni (such as diver Alan Routh, who was a member of the original Navy SEAL Team ONE), family traditions (marriages, siblings, and multi-generational families), and post-Princeton successes (such as masters swimmers and coaches).

A History of Princeton Swimming and Diving (2nd edn.)pdf

Thanks for the great review, Anne! Just one caveat: the book was not published by Penn State Press, but self-published through the Penn State library’s “open access” institutional repository. It’s not the kind of book the Press would publish.

Can I get some more cowbell? Fire it up!
Waiting to read this history. I wonder if it discusses the annual naming of the Turd?

But first, gonna Ctrl + F that thing for “Fancy Dive” because that has to be the best event ever contested.

Distance. The event is still swum at Princeton alumni swim meets every year.