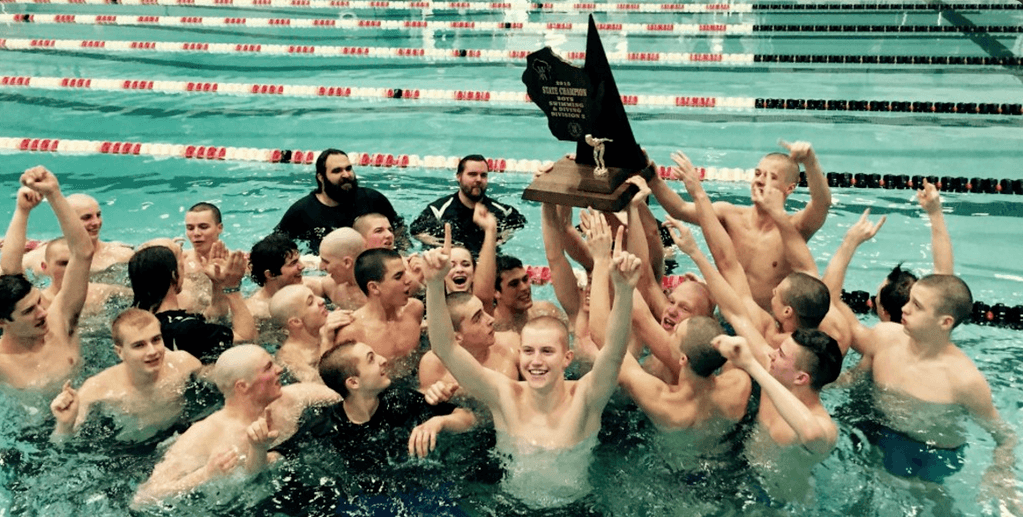 Monona Grove sophomore Ben McDade defended his titles in the 200 and 500 free at Wisconsin Interscholastic Athletic Association (WIAA) Division 2 State Championships this weekend, breaking an individual record and leading his team to their second state championship in as many years. The Monona Grove boys won the meet with 296 points. Shorewood took second place though sheer depth (251 points), with 18 scoring performances in finals.

McDade went four for four at the meet; his relay teams both won gold medals, with the 200 free relay taking down another record. Erik Doll, Conner Keith, Shane Sackett, and McDade swam the 200 free relay to break the 2011 state record by the slimmest of margins, clocking 1:25.80 to take down the 1:25.81 mark. Then Doll, Vincent Giallambardo, Erik Storms, and McDade swam the 400 free relay in 3:11.12 to just outswim the Shorewood team, who finished in 3:11.89. None of the MGHS ‘A’ relay swimmers are graduating, so the team can anticipate another year of relay domination next season.

Storms, also a sophomore, grabbed another victory for the MGHS Silver Eagles with 51.03 in the 100 back.

Noah Larson of Baraboo dominated the sprint free events, doubling up on victories in the 50 and 100. His seed time in the 50 from Sectionals, a 20.61, was just .02 off another 1995 state record. In the timed-finals at the state meet, he went 20.78 to win the event, but, as a junior, he’ll have another shot at the record next year. Larson won the 100 free by just one one-hundredth, outtouching Cedarburg junior Will Hobbs for 46.72 in the event. Hobbs finished in 46.73.

Grafton won the remaining relay when Bailey Bodart, Jacke Senczyszyn, Sean O’Connor, and Adam Schacht teamed up for 1:35.42 to outswim Monona Grove’s 1:35.80 in the 200 medley. O’Connor’s fly leg sealed the deal for the Grafton swimmers, a swift 22.32.

A group of seniors won the remaining events. Nicolet’s Jeremy Moser took the 1 meter title with 573.90 points, edging out Monona Grove junior Henry Carman’s 571.25. To round out the meet, Cedarburg’s Jared Nickodem won the 200 IM in 1:55.25, and Benny Liang of Whitewater won a packed 100 breast final in 58.64.