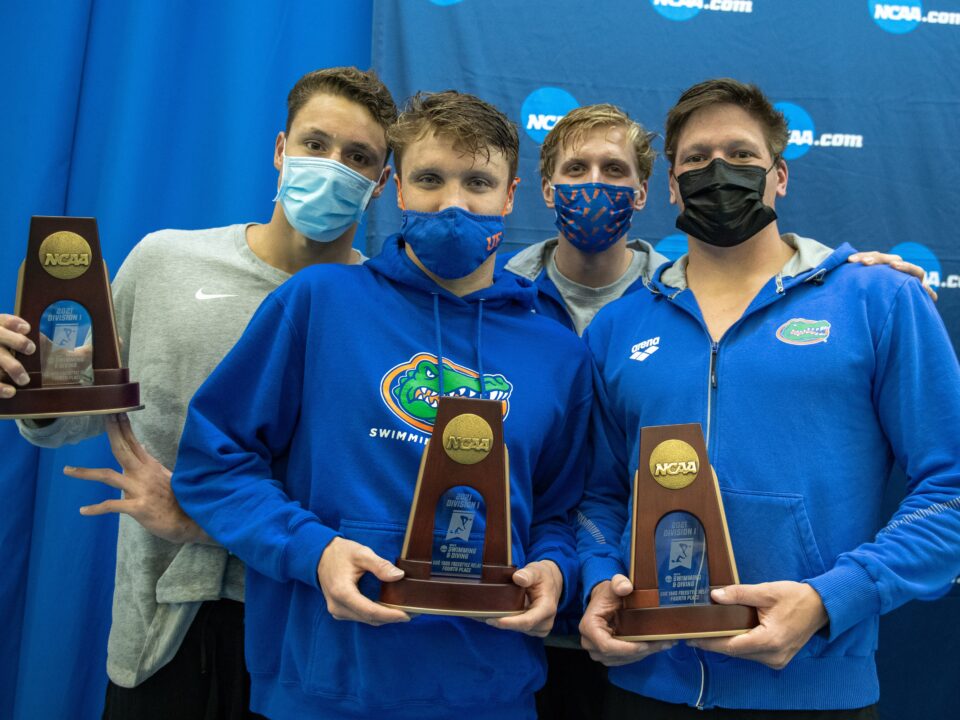 While it was easier to make the finals of the 50 free this morning than it had been in year, Cal and Florida rocked it and the 200 free relay tonight,. Current photo via NCAA Photos

This morning, we talked about how it was a lot easier to make the finals of the 50 free than it had been in previous years. And while those respective finals were pretty slow in the bottom half of each of tonight’s 50 free finals, we saw some scorching times both in the 200 free relay and at the top of the 50 free. In the opening event of the session, the 200 free relay, Cal and Florida combined for the fastest four relay splits of the night, with Cal getting a stunning 18.06 from Ryan Hoffer and a 18.51 from Daniel Carr, and Florida getting a 18.38 from Eric Friese and a 18.59 from Will Davis.

Cal got the night rocking with a 1:14.36, rattling the oldest yards U.S. Open Record, and shaving a tenth of a second off the Bears’ team record. But the Florida Gators were just a whisker behind at 1:14.48, swimming the Gators’ 2nd-fastest relay ever, just behind the Caeleb Dressel-led 1:14.39 from 2018. Florida can’t train sprinters, huh?

The Gators kept the momentum rolling in the individual 50 free, where freshman Adam Chaney took 3rd in 18.88, and sophomore Eric Friese won the B-final with a 18.90, which would’ve taken 4th in the A-final. Friese also scorched the 2nd-fastest relay split of the day with a 18.36, behind only Hoffer’s 18.06.

There a few other less-familiar faces in the top 8 of the 200 free relay, as Georgia, Texas A&M, and Virginia, none of which have recently been known for their sprint squads, all set school records.

On the 400 medley relay, Texas A&M’s Shaine Casas had the fastest leadoff of the night with a 44.47. Florida’s Dillon Hillis had the fastest breaststroke split with a 50.27, as the top six teams all got 50-point splits on the breast leg. Hillis is seeded 5th individually with a 51.22. Hoffer continued his strong night with a 43.80 split on fly, the only man under 44, and what appears to be the 6th-fastest split ever. Texas anchor Daniel Krueger was the only freestyler under 41 tonight, clocking a 40.80 and setting up what should be a great battle against Hoffer in the 100 free on Saturday. Combined those four legs would go 2:59.34, still just off of Texas’ all-time record in the event.

I need someone to make a video where you play the start of this years 50 final side by side with the 17.6. Imma have that up on my youtube after every 50 final for the next 30-40 years until that record finally goes.

Not to take away from Hoff. His last 10y gives a lot of hope for his 100 and LC prospects. I actually think his last 10 is comparable to Caeleb’s swim but that explosiveness off the start/ wall is something else from CD

That Urlando backstroke time is a very interesting split IMO. 44.99 is no joke.

Not that it matters (since we’ll see him race sooner or later anyway), but still curious why Seeliger didn’t suit up for his 100 free at Pac-12s

I’m not 100% sure but I remember seeing another user mention something about helping biondi out?

Way to go VOLS! You are being warriors really, really swimming tough just like your coaches teach you.