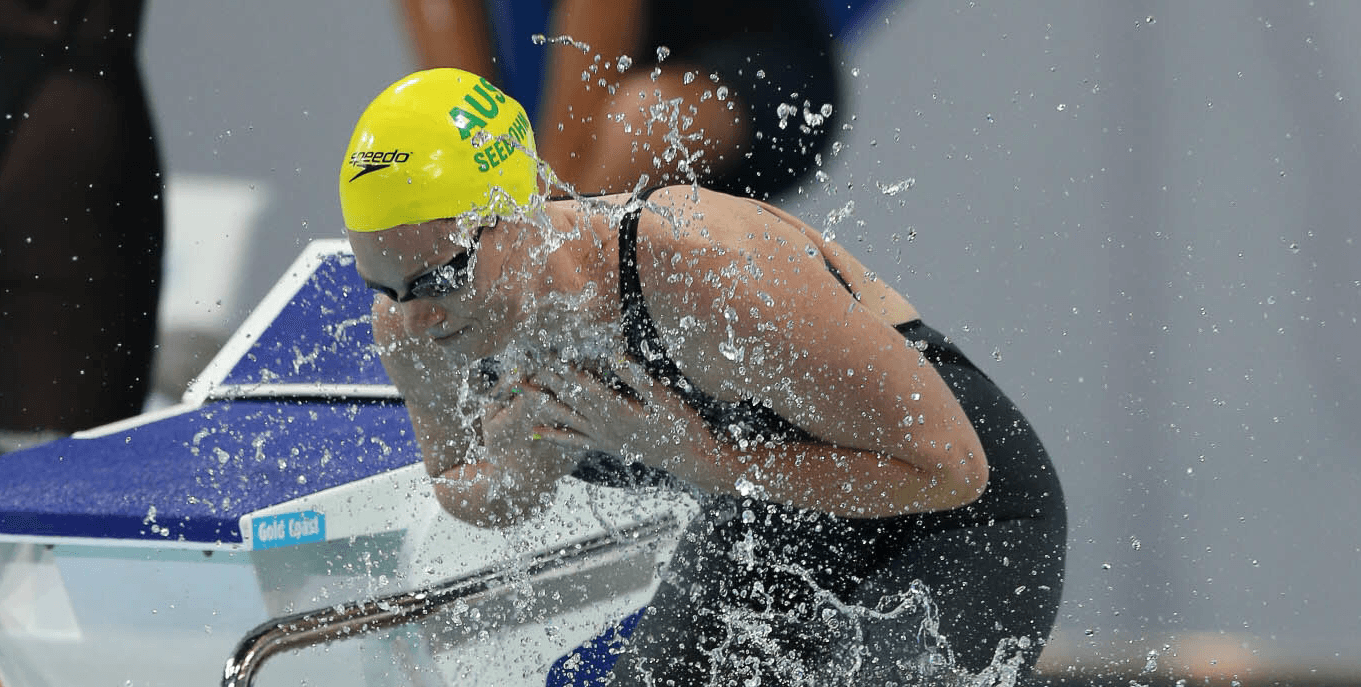 Australian backstroking ace, Emily Seebohm, had qualified as the top Aussie female in the 200m IM event for 2015 Worlds, but has confirmed she will now be dropping the event from her lineup in Kazan. Archive photo via (courtesy of Paul Younan)

The Australian team has not had the best of luck thus far in this year as several Dolphins swimmers have suffered setbacks, which are having a ripple effect throughout the team with July’s 2015 FINA World Championships right around the corner.

Along with James Magnussen’s shoulder injury, Brittany Elmslie’s health scare and the controversial positive doping result of Kylie Palmer dating back to 2013, Australian backstroking queen, Emily Seebohm, has also experienced a rather turbulent first half of 2015.

Seebohm first suffered a knee cap dislocation due to what the swimmer called at the time “just a freak accident”, which turned out to be a result of a horse riding incident.  Then the Australian National Champion was dealt the blow that her longtime coach, Matt Brown, would be moving on to a different role in a different location, leaving Seebohm without a guide in this crucial training period for Worlds.

Seebohm was able to overcome the coaching hurdle, conducting a search, which ended with her selection of David Lush of Brisbane Grammar School as the man in which she will entrust her preparations for Kazan and Rio.   But, it appears her kneecap injury may still be an issue.

According to The Australian, Seebohm has confirmed that she will be withdrawing from the 200m individual medley event at World Championships, a race in which she holds the Australian National title from this past April’s National Championships. Seebohm put up a strong time of 2:11.37, which currently sits as the 6th-fastest mark so far this year.

Since the injury, Seebohm has “resumed full training in backstroke, but is unable to do breaststroke”, which certainly takes a medley race out of the medal hunt for the 23-year old Olympian. (The Australian)  Seebohm was the only swimmer to dip beneath the Australian Worlds qualifying time of 2:11.21.  However, Keryn McMaster, the 200 IM 3rd place finisher, is already in the Dolphins’ lineup for worlds, having claimed the 400 IM national title to punch her ticket to Kazan, so it is possible that McMaster may have the 200 IM added to her individual event program. With Seebohm’s announcement still being fresh, there is no official word on what the replacement action will be on the part of Australian head coach Jacco Verhaeren.

Commenting on the misfortune the Australian national team has faced in recent months, however, Verhaeren does say, “We spoke about it with the team yesterday and reminded them that it doesn’t change the goals for the individual or for the team.”

Coming to the conclusion that the team possesses enough depth in the 4×100 freestyle relay, the article states that Verhaeren is considering “whether to call for reinforcements for the battered team, at least for the women’s 4x200m freestyle relay” after losing both Elmslie and Palmer.  Verhaeren reportedly cites Melanie Wright, Bronte Barratt and Leah Neale as possible replacements for Palmer.

For her part, Seebohm is still scheduled to contest the 50m, 100m and 200m backstroke races at the 2015 World Championships.

She was a non entity in the event. Its a pity Coutts skipped this event at trials. It will be Hosszu, SMOC, Ye and Belmonte contending for medals .