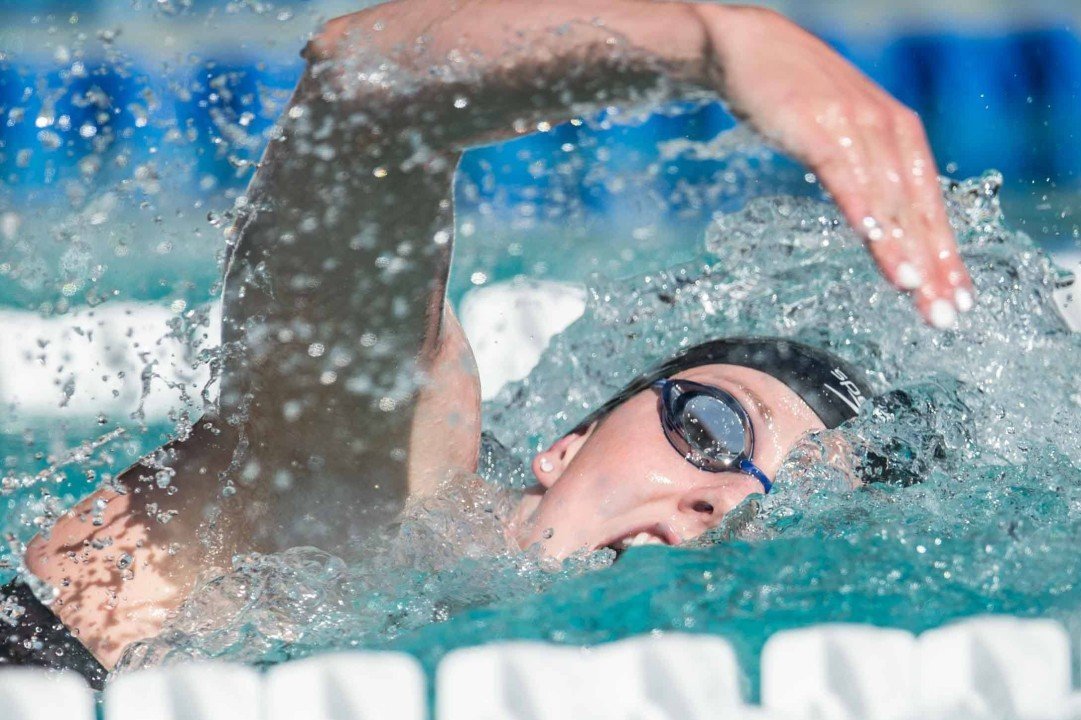 Missy Franklin will close out the Arena Pro Swim Series at Santa Clara with the 200 back and 100 free, two of her strongest events. Current photo via Mike Lewis/Ola Vista Photography

With the top nine seeds swimming in tonight’s final, the time to beat belongs to Olivia Anderson of Etobicoke Swim Club. Anderson won a very exciting race in the first of the morning heats, edging Bruna Primati of SESI, 8:52.31 to 8:52.39. Just behind the two leaders, Stephanie Peters of Marietta Marlins out-touched Natalia Jaspeado Becerra of Mexico, 8:53.18 to 8:53.40.

Hungary’s Katinka Hosszu continued to impress with her morning swims. Swimming virtually alone against the clock, the Iron Lady put up a 2:09.78 to lead the qualifiers for finals. That’s the third-fastest time so far this year. (Hosszu went 2:08.66 in Charlotte to lead the world rankings.)

Caitlin Leverenz posted the number two time of the morning, coming back from a .8 deficit at the 150 to out-touch Trojan Swim Club’s Yulia Efimova, 2:14.30 to 2:14.65, to win the first of the circle-seeded heats. Madisyn Cox was also in that heat; she ended up with the fourth-fastest time of 2:15.25. Maya DiRado, who was slated to swim in the middle lane of the next heat, was absent from competition.

The public was treated to several heats of really good racing in the prelims of the men’s 200 IM. Josh Prenot of California Aquatics won the first circle-seeded heat with 2:03.34 to lead the qualifiers at that point. In the next heat, Fiat’s Thiago Pereira, Gunnar Bentz of Dynamo, and Stanford’s Max Williamson battled down the stretch, coming to the wall in 2:03.41, 2:03.43, and 2:03.45, respectively. Pereira was later disqualified.

In the final heat, it was North Baltimore teammates Michael Phelps and Chase Kalisz who put on the show. Phelps turned first at the 100 wall, but Kalisz outsplit him by nearly a second on the breaststroke. While Phelps was faster by .4 coming home, Kalisz touched at 2:00.75, just in front of Phelps’ 2:00.77.

Hosszu led the pack in the women’s 200 back with a morning swim of 2:09.83. Stanford Swimming’s DiRado, who skipped the 200 IM in favor of this race, went 2:11.19 to post the second-fastest time, only .6 off her seed time. Missy Franklin of Colorado Stars won the final heat with the number three time overall, 2:12.14. Mexico’s Fernanda Gonzalez Ramirez went right at her time with 2:12.74 for fourth.

There is a lot of depth of talent in the men’s 200 back final; it should be quite a race tonight if no one scratches.

Russian Yulia Efimova nearly matched her season-best in the 50 breaststroke on Sunday morning in just prelims, swimming a 30.44. That’s barely slower than the 30.39 she swam at the Russian Championships in April, which was the best time since she returned from an 18-month doping suspension.

She’ll be chased by American Jessica Hardy, the second qualifier in 31.12.

The third qualifier through to the 9-swimmer final is Laura Lindsay from the Canton City Schools team, where she both coaches and trains. She could be quietly one of the better stories heading toward the 2016 Olympic Trials, as a former All-American at small school Toledo who has made an impressive return to competition in the last year.

The men’s 50 breaststroke field was led in prelims by two top international veterans: Brazil’s Felipe Lima (27.86) and New Zealand’s Glenn Snyders (28.26). Cody Miller, who had been in the second-to-last heat, was disqualified.

Not far behind Lima and Snyders was Chuck Katis in 28.33. Katis just finished his college career, and is now looking to make a big transition to long course at his first Pro Swim Series meet as a pro. His 100 wasn’t spectacular (he was a second-and-a-half short of his best time), but this 50 was a new lifetime standard for him.

In a final that averaged almost 27 years of age, 16-year old Michael Andrew qualified 7th with a 28.71 – which is within a tenth off his personal best.

Femke Heemskerk of Netherlands, who posted the world’s top time (52.69) at Eindhoven in April, went 53.83 to lead the field by nearly a half-second. Stanford’s Simone Manuel edged Margo Geer of Tucson Ford to win their heat, 54.26 to 54.74, and the pair qualified second and third for tonight’s final. California Aquatics’ Natalie Coughlin, who finished right behind Heemskerk in their heat, wound up disqualified.

It was a tight field at the top after 18 heats of men’s 100 freestyle. California Aquatics’ Nathan Adrian put up the top time (49.36) in a heat that also included Michael Phelps (50.60) in his third swim of the morning. Trojan Swim Club’s Vladimir Morozov qualified second in 49.64, 1.7 seconds off his world-leading time of 47.98 from Russian Nationals in April.

Fiat Minas’ Nicolas Oliveira (49.76), Federico Grabich of Argentina (49.79), Brazil’s Joao De Lucca (49.80) and Trojan Swim Club’s Alexander Sukhorukov (49.80) were all under 50 second in prelims. They will be joined in the championship final by Anders Lie Nielsen of Club Wolverine (50.04), Auburn’s Mercelo Chierighini, and the winner of a potential swimoff between Trojan Swim Club’s Dylan Carter and Geoff Cheah of Hong Kong, both of whom swam 50.11 this morning. It remains to be see who will stick around for finals, though; a swimoff may not be necessary.

Each Olympic-distance event yields points towards a swimmer’s season total. A win is worth 5, second place 3 and third place 1. Prize money roughly correlates to those point values, with a win earning $1000, second place $600 and third $200.

I expect a big 100 free from Miss Manuel tonight next to Heemskerk who is on fire this year.
I hope to see a decent Missy in her baby race, the 200 back, with please a decent finish.
And good luck Michael for another triple tonight! 😆 No, seriously, I think he will drop the 200 back. But I can’t blame him. He’s not a teenager anymore. !)

Any word on scratches? Nathan Adrian might’ve scratched the 100 later tonight. Not 100% sure, but Dylan Carter from USC just tweeted “Thanks for the scratch homie! #noswimoff #afinal”
Would be a shame if Adrian didn’t get to go toe to toe with Morozov tonight…

Didn’t Nathan make the final?
Didn’t see him… I thought he had a good prelim (I was there).

At this point MP sdould focus on just the 100 fly and the 200 IM for next years trials. It is a good idea to swim the 200 free, back and fly in the APS meets for training purposes but in the big meet I think those two should be his events.

I kind of hope Phelps sticks with the triple. He’s already done the 200 IM / 100 free combo a couple times this season.

Oh man, MP got 18th in the 100…. It looks like he hit the lane line during his underwater after his turn. I’m surprised he made it in the 200 back, and not here.

Missy didn’t make the A-final in the 100 Free…she has looked a little off this weekend. She could just be in the middle of hard training.

I hope that’s just that.
It looks like she has lost her endurance in long course to multiple efforts.

What’s ironic is that Coughlin got DQd for staying under water to long at this same meet a few years back.