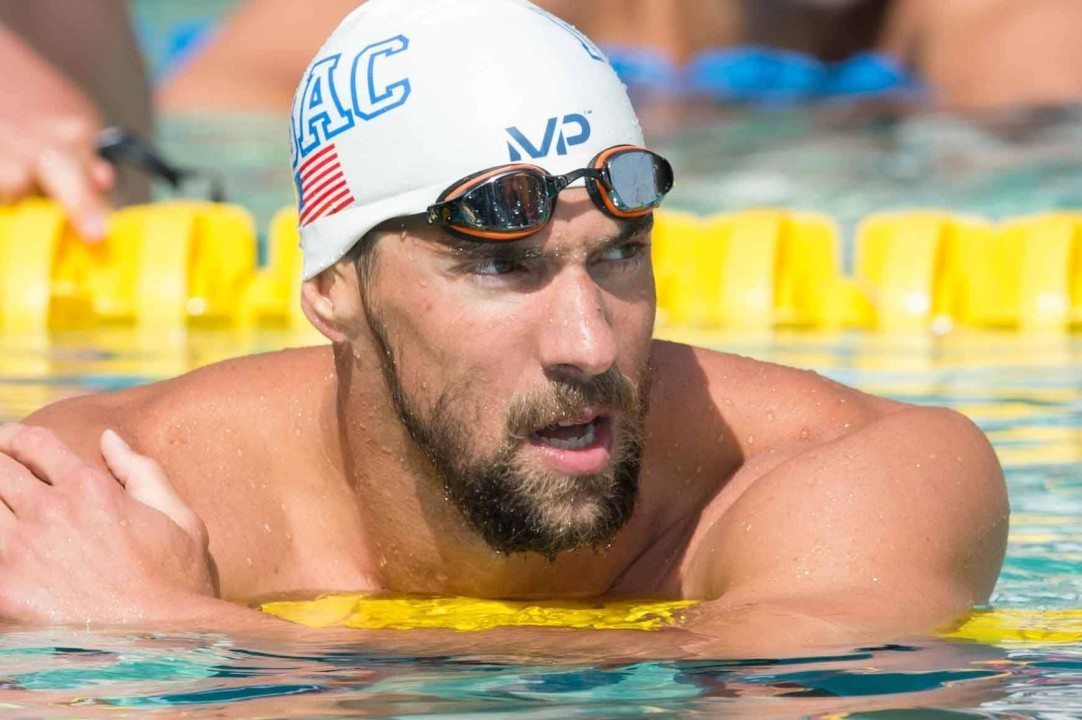 Michael Phelps is starting to inch his way back towards the type of schedule he would do at a meet before his retirement. He's competing in more 200s, doing more multi-event days, and for the first time since his comeback, he looks as though he's truly put in the work to be competitive in these races. Current photo via Mike Lewis/Ola Vista Photography

A full year has passed, but not much has changed atop the Arena Pro Swim Series leaderboard.

Breaking down his races from the Arena Pro Swim Series at Santa Clara, Phelps has a few points where he looks as though he needs to do some more work if he truly wants to comeback in full swing for Rio. This meet was his first attempt at a more historically Phelps-like schedule, and he did look a little fatigued heading into the last day.

Overall, his underwaters looked better than they have at any point in his comeback, and his races looked a lot tighter than they did just a few weeks earlier.

Below is the breakdown of his three medal winning swims this weekend:

The 200m freestyle was one of Phelps’ weakest races of the weekend from a technical standpoint. He lost efficiency throughout the race, slowing down and adding strokes almost every single 50.

His biggest issue was that third 50 where he lost absolute efficiency. He added close to a full second from his second 50 time, and took one more stroke cycle as he approached the wall for the final lap.

Phelps tried to pick up the pace on the last 50, and in doing so he did match his second 50 time with a 27.62, however he added another stroke cycle to do so and faltered as two competitors passed him heading into the wall.

As per his underwaters, unlike his 200 fly where they seemed to get stronger to the end, he looked as though he was having a tough time staying underwater during this 200 freestyle. His turns were arguably better than they have been for some time, however it still seemed like he struggled with the task.

Phelps’ 200 fly was arguably his best put together race of the competition. He was extremely consistant on stroke count, maintained his speed, and even went underwater a little longer on the last turn.

Even though Phelps was consistant on the final 100 within the third and fourth 50s, his final 100 was significantly slower than his first 100 as is to be expected. He lost a ton of efficiency on that third 50, adding an extra stroke (even with a very long finish into the wall) and splitting a second and a half slower than his second 50.

Phelps stated in the post race interview below that he wanted to build into that third 50.

He was consistant coming home on the last 50 however, putting up a 30.88 in order to drop time from his third 50 and keep his stroke count even. Considering that he’s once again “new” to the race, it was put together fairly well.

Phelps started to look like Phelps again underwater, averaging around five seconds from the turn to the breakout off every wall including the start. In fact, his last wall was his longest wall, showing that the former king of underwater dolphin kick might be back to once again dominate his competitors underneath the surface. Phelps did say in the post race interview below that he wanted to stay underwater as long as he could off that last wall.

Phelps 200m IM time was very good considering where he is in his training. It’s the fourth fastest he’s ever been at this meet in his entire career, and he looked like the racer he’s always proven to be.

Starting with his fly, it looked good. He went out in 17 strokes, the same number of strokes that he took the first 50 of his 200 fly, except for this was more consistant considering it was a little bit faster. He had a bit of a quicker breakout than in his 200 fly as well.

Right now, out of all his strokes, fly looks the best for Phelps. His 200 in Charlotte did not look great by any means, but it looks as though he and Bob Bowman have really worked through the kinks in his training to get him back to where he needs to be.

His breaststroke is arguably his weakest stroke right now. His 35.62 split was without a doubt the weakest of all his splits and where he let up the most ground. He was almost two full seconds slower than what he split at Pan Pacs.

Freestyle wasn’t a whole lot better for Phelps, but he did manage to hold on for the gold which is all he really needs to do at this point. He was a 28.31 with 32 strokes, completely losing his capacity on the last 50. His last 50 in his 200 free was better, which is to be expected, however Phelps is known to be a closer. Considering his training right now, it could be a sign of fatigue, especially after the tough schedule he swam at the meet. That was the first time Phelps swam such a tough triple (200 IM, 200 back, 100 free) since Beijing; he goes into more detail in the post race interview below.

Is it me, or is Phelps bending his wrists more during his freestyle recovery and entry, especially on his right side? His hand also seems higher relative to his elbow as he approaches the entry.

I was at the meet watching and I noticed this, too. After Phelps raced the 100 free prelim on Sunday morning, I saw Bowman talking to him about it by the side of the pool. I could tell they were talking about it, because Bowman first made a motion where he pretended he was putting his arm in the water with that bent wrist thing, and then he made a second motion, where he pretended to put his arm in the water with a straight wrist.

Thanks for the intel! Very cool.

To me, Phelps’ 200 free didn’t look so bad. The turns were good, one of the turns & underwater was actually very good. As for the stroke count, it’s always going to increase from 2nd to 4th lap. What was really missing was the powerful (flutter) kick, but that might come with time; as for the strong finish, forget about it, at 30.

Regarding the bent wrist, has it not been always a characteristic of Phelps’ freestyle? Check this video from London 2012 https://www.youtube.com/watch?v=pziUBplSIK0

I love that video. Yes, he’s always bent it some but it seemed more pronounced to me in the videos I saw from Santa Clara.

I’m actually pretty impressed with his 2 fly, I think he could go 1:53 at Rio if he swims it, maybe give le Clos a run for his money. On everything else, I’d predict about a second faster, except the 100 fly, a 50. would be incredibly impressive, although I think he has a shot. Historically, Phelps isn’t very fast in-season and the fatigue wears on you more the older you get.

Actually, his style is very impressive