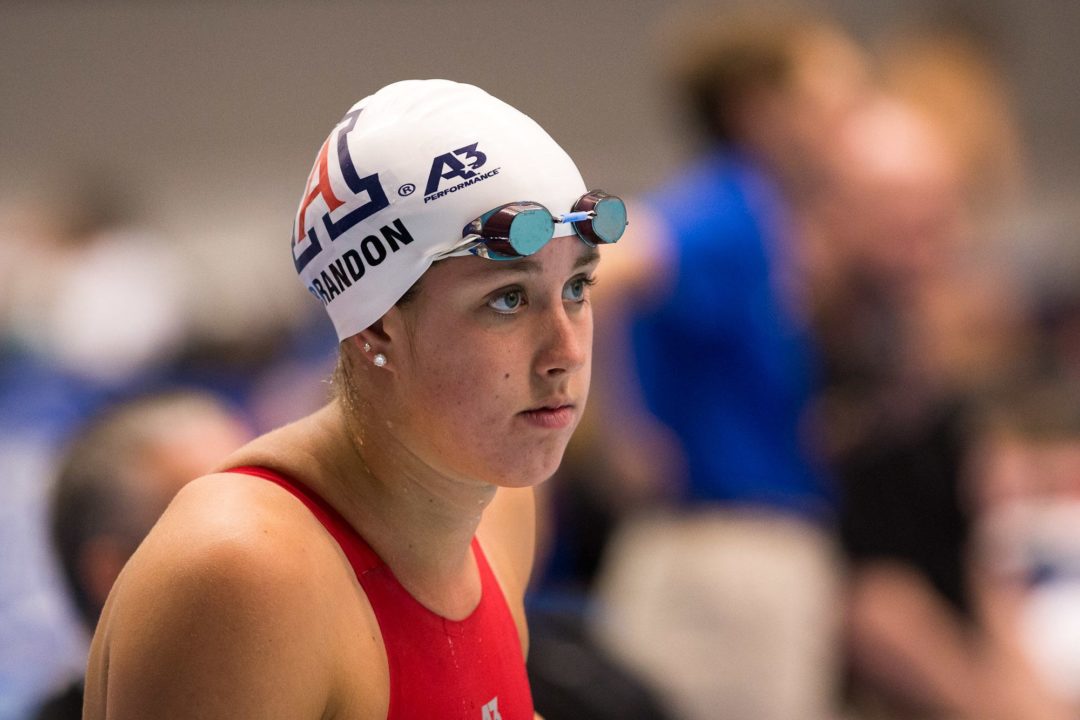 Bonnie Brandon led 1-2 finishes in both backstrokes to power the Lady Wildcats past all four visiting foes while the Zona men picked up the win over Missouri. Archive photo via Tim Binning/TheSwimPictures.com

Just a couple of days into 2015 and the Arizona Wildcats have already stocked their record with 5 dual meet wins on the year.

The Arizona men and women topped Missouri at home in spirited showdowns, while the Wildcat women also picked up wins against Oregon State, Northern Arizona and New Mexico State.

Though Missouri boasts a strong lineup with big hitters like All-American Dani Barbiea, the Lady Wildcats were incredibly impressive, stifling the Tigers attack and holding their biggest challengers to just one individual win.

Equally important were junior Taylor Schick and senior Elizabeth Pepper, who shut down Missouri’s star Barbiea in both of her individual races. Schick out-dueled Barbiea in the 50 free 23.11 to 23.47. Then at the end of the meet, Pepper beat Barbiea in her best event, the 100 fly, by a margin of 55.51 to 55.74. Barbiea tied teammate Erin Metzger-Seymour for that runner-up spot.

Meanwhile Samantha Pickens won both diving events for the home team, scoring 306.30 points on 1-meter and 292.45 on 3-meter, though the event was exhibitioned.

Missouri swept the backstrokes, but Arizona answered right back by winning each breaststroke event directly following each back race. Those backstroke wins came courtesy of Carter Griffin. The sophomore was 50.03 in the 100 back, plus 1:47.63 in the 200, beating out one of Arizona’s top threats (South African Michael Meyer) in both.

But American record-holder Kevin Cordes immediately turned momentum back to Arizona both times, winning the breaststroke races. Cordes was 54.37 in the 100 and 1:59.79 in the 200. Those were enough to beat Missouri’s tough gauntlet of breaststrokers that includes Sam Tierney and Igor Kozlovskyij.

Tandy, the reigning NCAA champ in the 50 free, was able to take that race, though he couldn’t quite crack 20 seconds. Tandy was 20.13.

The big difference-maker between Arizona and Mizzou (other than depth) was freshman Rasmus Skjaerpe, who swept the final two individual events to give Zona the win. Skjaerpe took the 100 fly in 49.53, the only guy under 50 seconds. After the diving break (only female divers competed, according to results), Skjaerpe went 1:52.44 to beat teammate Michael Meyer in the 200 IM.