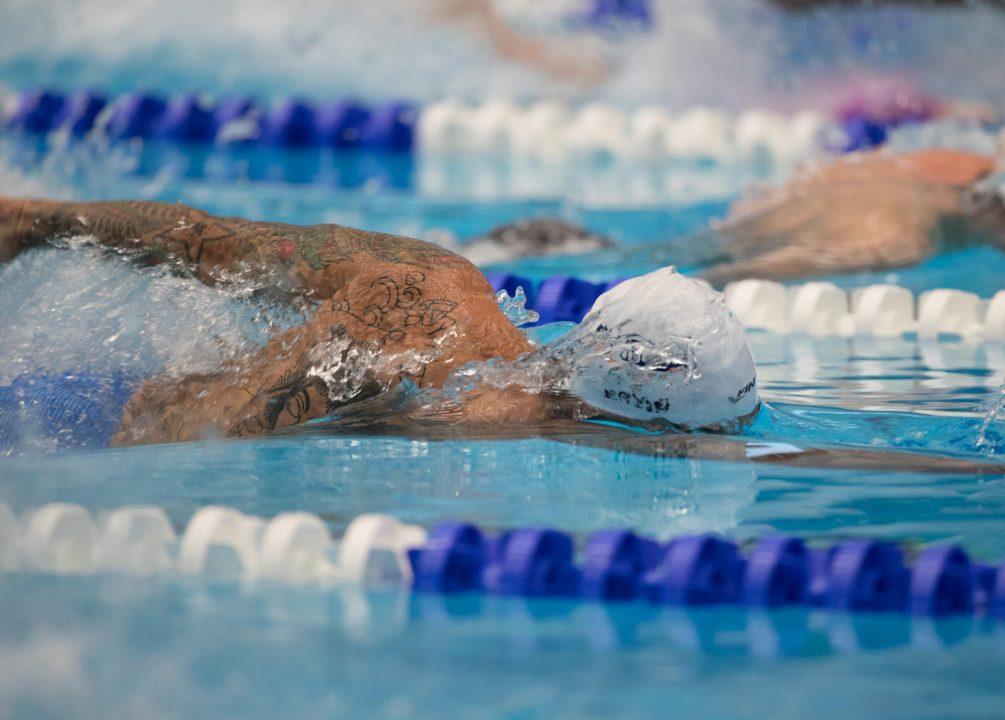 Swimming his first long course race since the Olympics, Anthony Ervin won the 100 free at the 50th Geneva International on Friday. Current photo via “Rafael/Domeyko Photography”

American Anthony Ervin swam a 50.25 to win the 100 free on day 1 of the 2017 Geneva International – the 50th anniversary of one of the first major long course meet on this year’s global calendar.

For the seemingly ageless Ervin, who won Olympic gold last summer in the 50 free at 35-years old, the swim is about three-tenths faster than the one with which he opened his 2016 season (at the Pro Swim in Austin).

Finishing 2nd in the race was Belarusian swimmer Artyon Machekin, who is a decade younger than Ervin, in 50.48. Scott McLay of Scottland won the 18-and-under division in a new Meet Record of 50.98.

Other familiar names to wind up atop podiums on day 1 included Katie Meili of the United States, who won the 50 breaststroke in 31.93 ahead of Martina Moravcikova (32.25) and Amit Ivry (33.41).

Israel’s Jonatan Kopelev, representing the home team Geneve Natation 1885 in the meet, won the men’s 50 backstroke in 25.20, which is a new meet record. The old record of 26.32 was done in prelims by Nils Liess, who also was under that standard with a 26.27 in finals.

The final highlight of day 1 came when Hungary’s Laszlo Cseh won the 100 fly in 53.56 to defend his title – albeit a full second slower than he swam a year ago. American Tim Phillips was 4th in 54.99.

And so it begins again. Ervin — dude is just ageless & incredible.

He was faster than last year at this point in the season too… How is this even possible?

He has the High spirit on full gear – meaning his confidence is beyond age identification . he loves as well what he does , which helps greatly . He just went to give swim clinics lately , which probably boosts even more his humble Self confidence .

no one cares….a has been in a race with no contenders…if hes legit in a COMEBACK..well see at 66 nats right

He won two Olympic gold medals last year? How in the world could you call that a has been?

Not sure about the semantics here, but I think if you’re still within ~6 months AFTER winning an olympic gold, it’s more of a came back