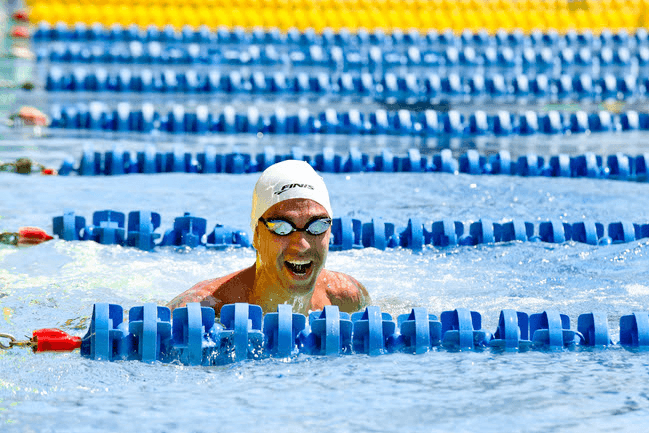 Anthony Ervin doesn’t know exactly what the next 18 months hold for him in terms of swimming, but he’ll be getting... Archive photo via FINIS

Anthony Ervin doesn’t know exactly what the next 18 months hold for him in terms of swimming, but he’ll be getting some training for the business world.

The Olympic gold medalist told USA Swimming’s Mike Watkins that he will begin Dartmouth’s Tuck School of Business General Management Program in this spring in an effort to “augment [himself] with additional professional skills” to complement his swimming expertise. Ervin’s agent declined comment about where he’ll be training during that period.

Beyond Dartmouth, his training plans are up in the air. Ervin maintains, like he said last summer, that he will be at the 2020 Olympic Trials in Omaha – but his path to getting there will be fittingly unique. He did say in July that he planned to keep San Diego and longtime coach David Marsh as his home base, remaining within “striking distance” of the area.

Ervin, 37 years old and a Cal graduate, is currently training with the University of Hawaii through January (his agent told SwimSwam he’s joined them for training camp for the past few years), but hasn’t logged many hours in the pool until recently.

“I’ve been running, cycling and occasionally weight lifting,” he told Watkins. “The plan is to compete for USA Swimming, USMS, abroad, even a triathlon or two with USA Triathlon.”

In addition to his schooling and swimming endeavors, Ervin said he is working on a book with Paralympian Brad Snyder about “Olympic life and victory;” the duo has also teased a podcast, the Five Rings Project, set to be released in early 2020. The book will be Ervin’s second in addition to his memoir written with Constantine Markides, Chasing Water.

Other than those projects, and spending time with his toddler-aged daughter, Ervin revealed little about his future plans.

“Beyond the summer and moving into fall – my forecast isn’t well formed to specifics other than Omaha in 2020. All Tokyo 2020 plans are clandestine.”

If anyone can do it (as in make the US Olympic Team), Tony Ervin can! He has done it, again, & again!!! If Tony does it again, it will definitely make the field much more interesting. Imagine all the people who will follow this story; anybody over 30! That’s going to be a huuuge base!

Glad Ervin is spending time with his little girl. Though he’s (rightfully) reticent about his private life, balancing out training, schooling, and family time can only benefit all involved.

What if I told you that Anthony Ervin was pro-FINA and anti-ISL. Wonder whether that would influence the opinions of commenters on this board, either against Ervin or against ISL…

Dude is 37 and knows how to throw down when it counts. I think he is mostly focused on being a well rounded person than just a swimmer. I think he see things way more broadly than in just terms of swimming. And oh remember when he took over a decade off?

Further cementing his status as the most interesting man alive.

I think an MBA from Tuck is great, but why so secretive with his training plans? “Tokyo 2020 plans are clandestine?” CIA? Black Ops?

not secretive… he just doesn’t put it out there for the word to see. he is a man of actions

@coach John as missy should’ve been.

I’d say it’s also likely that he doesn’t fully know what they are yet. It might be a little of this, a little of that, etc. He knows what it takes to make the team. He is freakishly talented. He will make it work if that is truly what he wants.

Peironi, Dressel, Apple, Adrian, conger, haas, held, Chadwick. I think he could get in there but the competition will be tough

it will be the toughest Men’s 100 free selection in a long time for an Olympic seat , thats clear from now on ….but i wish him good luck anyway .