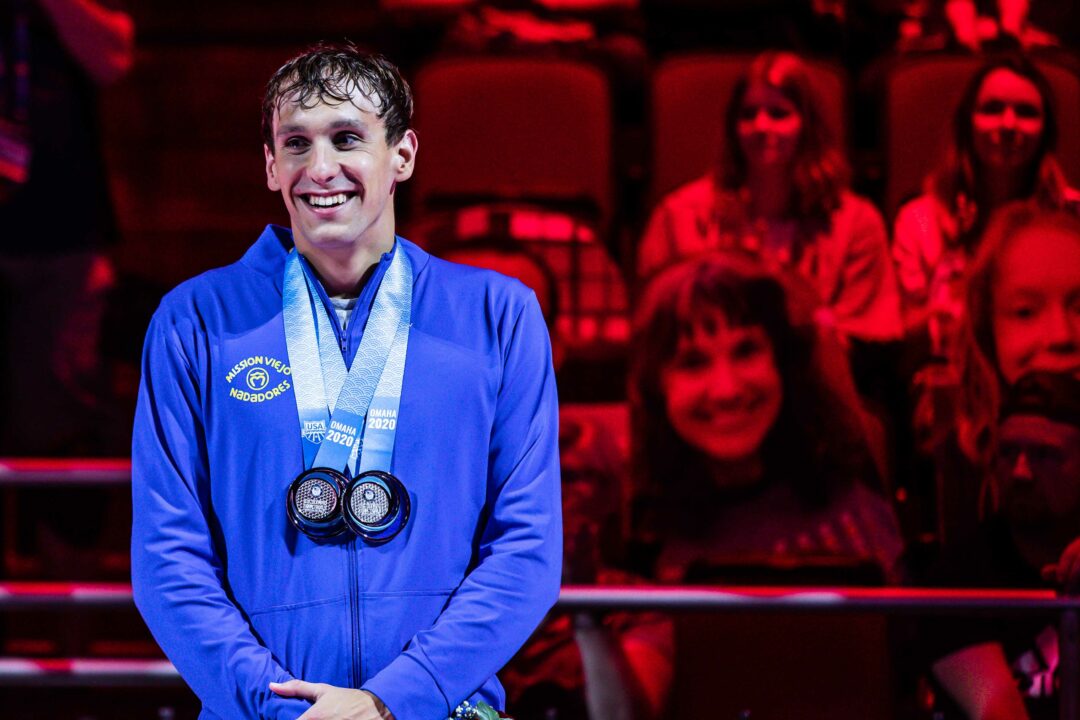 US Olympian Michael Brinegar tested positive for COVID-19 after returning from the open water qualifying event in Portugal in May. Archive photo via Jack Spitser/Spitser Photography

He has been replaced on the entry lists by Simon Lamar, who was not originally entered in the meet.

Brinegar says that when he returned from the national team trip to an open water race in Portugal at the end of May he showed mild symptoms for two days. That race was also the final leg of American qualification for open water.

He first took an at-home test, which showed positive, and he followed that with a PCR test that also came back positive. Brinegar says that it took 4 days to get the results of his PCR test, and that “by that point I would be out of the water a minimum of 7 days and I would be less than 3 weeks out from swimming a 25k.

“It didn’t make sense to still compete at Worlds.”

Brinegar was previously one of three American swimmers who withdrew from the Short Course World Championships last December over rising concerns over COVID-19 in Doha and the possibility of having to quarantine abroad during the holiday if they tested positive. Michael Andrew and Rhyan White also withdrew from that meet.

Lamar finished 7th in the open water 10km race at US Nationals earlier this year, and 5th in the 5km event. The top four Americans in the 10km race were Brennan Gravley, Dylan Gravley, Joey Tepper, and Brinegar. Lamar was the next-best finisher in the 10k.

USA Swimming never announced the change, however entry lists reflect the updated lineup for the Americans.

At the end of the 2022 NCAA season, Brinegar opted to turn pro and forego the remainder of his collegiate eligibility at Indiana. At the time, he announced that he would move back to California to train with his high school coach Mark Schubert, though Schubert is on at least a 6 month assignment training swimmers in China.

In his freshman year at Indiana, he was the NCAA runner-up in the 1650 free. He took a redshirt year in the 2019-2020 season to train with Schubert in California in preparation for what was supposed to be the 2020 Olympic Trials. After the onset of the pandemic, that year’s NCAA Championship meet was canceled and the Olympic Games were postponed.

He returned to Indiana for 2020-2021 and finished 10th in the mile at the NCAA Championships. He also won the Big Ten title in the event that year, making him the first Hoosier to do so since 1991.

He then qualified for the Tokyo 2020 Olympic Games via 2nd-place finishes in both the 800 and 1500 freestyles at the 2021 US Olympic Trials. He finished 17th in both races in Tokyo.

I’m sure it was a tough decision, but I cannot imagine trying to swim a 25K so quickly after having Covid. Brutal.

The athletes and the coaches need to wake up to people having lasting affects of COVID and other diseases. TEAM USA shouldn’t be risking worlds by being reckless with COVID and masking

I am suprised that people aren’t wearing masks. I saw one Chinese swimmer in finals come out with mask on.

I think all the Chinese athletes have been. Saw a few wearing them on the podium as well.

It’s not a bad idea!

I’ve seen a couple studies that suggest returning to exercise too soon increases risk for long Covid. Not great!