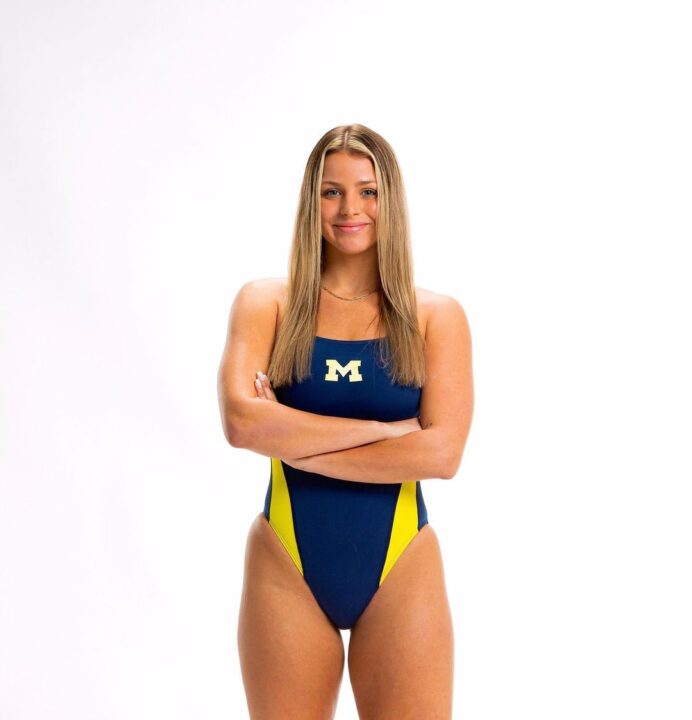 Sophie Housey announced a transfer to Texas A&M in the offseason, but she will instead return to the University of Michigan to continue her academic career. Current photo via Michigan Athletics

All-American swimmer Sophie Housey has announced her retirement from competitive swimming. After a brief stint at Texas A&M University, she announced on Tuesday that she would return closer to home at the University of Michigan.

Housey had three years of NCAA eligibility remaining (including the bonus 5th year for COVID). She is a native of Grosse Pointe Farms, Michigan, which is less than an hour from Michigan’s Ann Arbor campus.

At Michigan, Housey will be a “regular student,” working on a degree in sports management.

“To the sport I once loved, I cannot be more thankful to write this,” Housey said. “After lots of consideration, I have decided to retire from swimming. I want to thank my coaches, family and friends for allowing me to have a successful career!

I am thankful to have had the opportunity to swim at Texas A&M, however, after my short time there I came to the realization that my love for the sport had dwindled and my decision was clear.

Choosing what is best for me now and in the future was a large part of this decision. With that being said, I am thrilled to be back home as a regular student at the University of Michigan to finish my degree.

My college years have been an absolute rollercoaster, but I feel confident and fulfilled in leaving the sport knowing all that I’ve accomplished.

Editor’s note: NARP is an acronym that stands for “non-athlete regular person,” used as a tongue-in-cheek euphemism for a retired college athlete.

Housey said when she entered the portal that injuries presented new challenges during her sophomore season.

“Within the first month of school, I had an internal health scare,” she told SwimSwam. “I got very sick.

“I then sprained my shoulder and was unable to swim with both arms for several weeks. An unexpected family death happened in the midst of rehabbing my shoulder, which led to a further stretch out of the pool.”

Housey says she then got the flu which caused her to lose 15 pounds, and her training was inconsistent throughout the spring semester.

“Once I was back in the pool, it was extremely hard to regain the strength and weight that was lost,” Housey said. “Out of my control, all of these factors were detrimental to my performance this season.”

Housey swam in just three meets for the Wolverines as a sophomore: a tri meet against Wisconsin and Minnesota, and a dual meet against Ohio State, in January, plus the Big Ten Championships.

Housey says that she was fully healthy by Big Tens, and in spite of those hurdles that impacted her training, she still scored 26 individual points for Michigan. That included high finishes of 15th in both the 200 free and 200 backstroke. While her 200 free was short of her best time, she did manage to drop about 7-tenths in the 200 backstroke:

Housey says that she views her retirement as part of her positive growth as she learned to be happy with what she’s already accomplished.

The Texas A&M women have one of the top 200 freestylers in the SEC, Chloe Stepanek, on their roster, but in recent years have lacked the depth to go with her. The Aggies finished 6th at the 2022 SEC Championships meet, which put them at the top of a pile of teams that were well behind the 5th-place Florida Gators.

Good for her for doing what was best for herself. Too many unhappy swimmers out there swimming not because they enjoy it but because they feel obligated.

Farewell Sophie Housey. I was and will always be a big fan.

I wish her the best. And yes it is retirement from competitive swimming after swimming for probably 12 or 15 years. Swimming is arguably the toughest sport there is and that is certainly not appreciated by non swimmers. Unless your tough as nails and even for some who are; the sport of swimming can just chew you up and spit you out!!!

She was always fun to watch!

Sounds like a crazy sophomore year. Tough to face that much adversity

With that said, leaving a sport that young is quitting, not retiring. Wish her the best

She is moving forward and moving on. She has clearly hit some hardships and been kicked while down and is still moving forward. Great example of perseverance and resilience.

With the possible exception of Guerra, consistently the worst takes on this site.

I dont know, Taa and Yozhik put up a fight

How many years of swimming do you require to call it retirement instead of quitting? Most of these kids have swam 10-12 years

Finish college eligibility. When you take a roster spot on a team you are making a commitment. How do teammates feel when someone walks away early?

And good point, they are kids. Hard to retire

As a former college swimmer, I respected any teammate who quit because their heart wasn’t in it. I didn’t feel abandoned at all. The real problem were the people who stayed on the team despite being burnt out/no longer caring. They really dragged everyone down.

I came in here to write something like this, but you said it pretty well.

It also drags the person themselves down. I knew I was not fully into swimming in freshman fall. I stuck around for quite some time after that. This meant giving up other opportunities like taking classes held in afternoons and evenings, attending on campus speaker events, spending time with new friends, don’t non-swimming college activities related to my eventual career (I’m an attorney), and spending more time with grandparents (who passed away during that time period).

Swimming is great, but if you’re not into swimming in college, you’re not helping yourself, your team, or your school. That’s all an illusion based on fear of… Read more »

You have no marbles

Because he lost them?

One of the most senseless comments I’ve seen on this site. All your comment accomplishes is insulting a young woman that clearly has been going through a difficult period in her life. Congratulations.