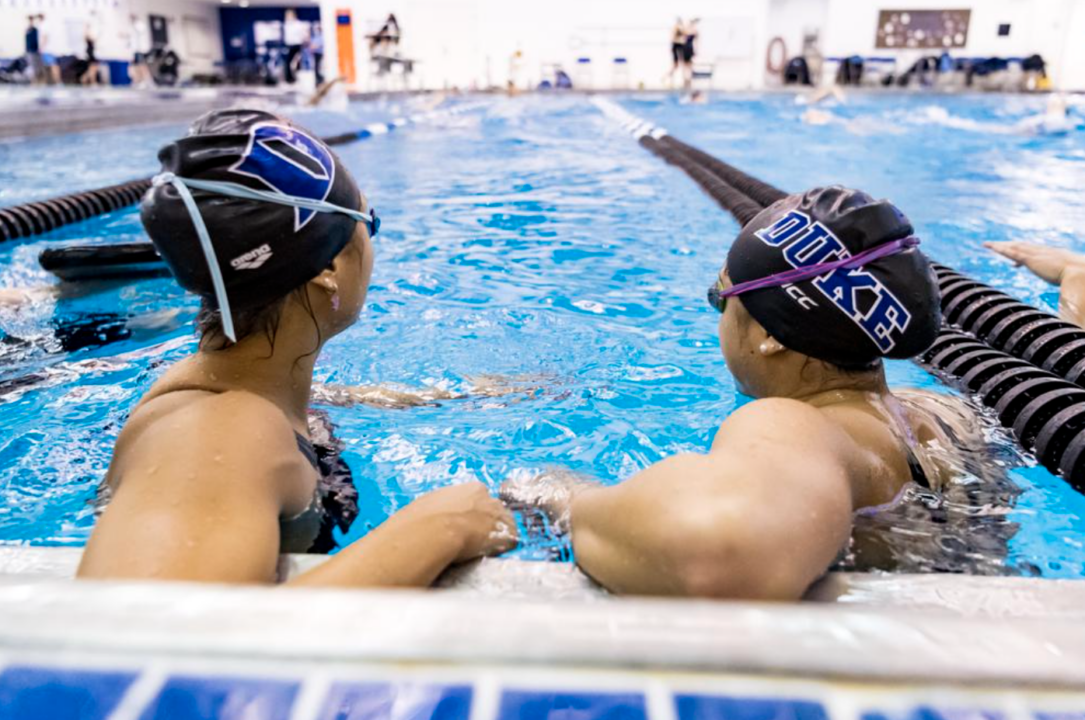 #20 ranked Duke women took down #22 ranked Virginia Tech women, while the #10 ranked Hokie men came out on top on the men's side. Archive photo via Duke Athletics

The meet was Duke’s official season opener after holding their team intrasquad earlier in the month. The Virginia Tech men moved up to 2-0 on the season, while the Virginia Tech women moved down to 2-1.

Junior Youseff Ramadan led the Hokie men as he came away with two individual wins and contributed to the winning 400 freestyle relay, where he was joined by Mario Molla Yanes, Luis Dominguez, and Will Koeppen. The relay was also a pool record by about a tenth (2:56.37) and puts them 16th in the country this year.

Ramadan took first in the 100 free by over a second over Duke’s Coleman Kredich, stopping the clock at 43.85. He also won the 100 back, beating out teammate Forest Webb by almost a second, touching the wall at 47.84. Ramadan almost exactly tied the 100 free time he swam at this meet last year. The swim was not a season best, however, as he reportedly clocked a 42.36 in September at Virginia Tech’s intrasquad.

The Duke sprinters put up an impressive performance in the 50 free, where they swept the top three spots. Kredich led with a 20.67, followed by Charlie Gingrich (20.76) and Brad Sanford (20.92). All three were faster than they were at this meet last year, with Kredich’s swim being drastically faster, as he was over a second quicker.

Duke also took first in the opening 200 medley relay, where their team of David Chang, Cole Reznick, Sanford, and Kredich finished with a time of 1:28.76, almost half a second faster than Virginia Tech.

Sophomore Sarah Foley highlighted the women’s side, taking home three individual first place finishes. Additionally, she contributed to the second-place 200 medley relay where she was joined by Emily Lenihan, Kyanh Truong, and Sarah Snyder. Foley had the fastest 50 breaststroke relay split of the meet, splitting a 27.15. Her first win was the 200 freestyle (1:47.47), followed by the 200 breaststroke (2:11.94) and the 200 IM (1:59.57).

Foley is coming off a highly successful sophomore year, where she placed as high as 6th place in the 200 IM at the 2022 NCAA Championships. She is off to a significantly faster start this year, as her 200 breast is almost 5 seconds faster than where she was at this meet in 2021.

The Hokie women ended the meet with a dominating victory in the 400 freestyle relay, where Sastre, Fanni Gyurinovics, Atkinson, and Emily Claesson combined for a 3:19.91, putting them 8th in the country this year.

Virginia Tech head coach Sergio Lopez mentioned in their press release that the Hokie women had a few athletes out due to injury, including backstroker Caroline Bentz and sprinter Sarah Shackelford.

Up next, the Hokies will host Ohio State on October 28th and 29th, while Duke will head south to take on UNCW in Wilmington, North Carolina.