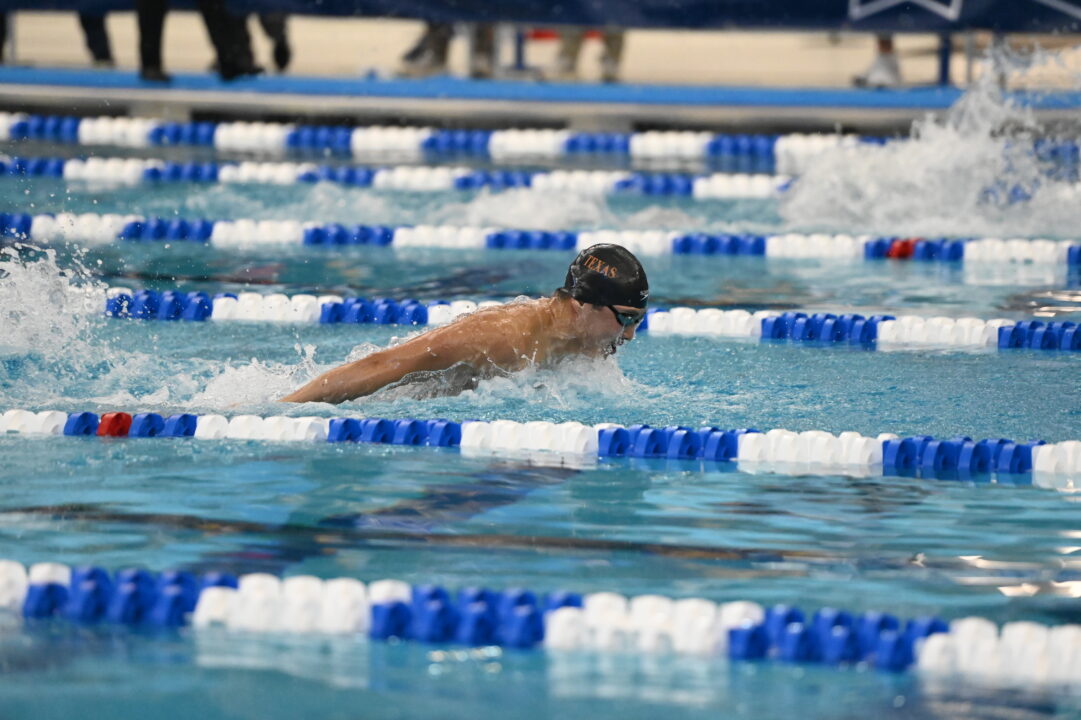 Alvin Jiang is the Texas men's first swimmer in what was the Class of 2021 to announce that he's returning for a fifth year. Current photo via NCAA Photos

All-American Alvin Jiang announced on Instagram today that he was returning to the Texas Longhorns for a 5th season of NCAA competition, making him the first male Longhorn swimmer that we are aware of to announce that he’ll be using his extra season of eligibility.

After posting “One more year” and a picture of himself and teammate Andrew Koustik, (and a Joker-Dallas Cowboys mashup meme as part of the same post), Jiang confirmed with SwimSwam that he will be returning for another year of college competition at Texas.

The Longhorns won the 2021 Division I Men’s NCAA Swimming & Diving Championship, marking their 5th title out of the last 6 championships. The Cal Bears have taken 2nd to the Longhorns each time the Longhorns won, while Texas took second to Cal in 2019. Jiang will join Texas diver Jordan Windle as key pieces of last year’s title run who are now returning for another round in Austin.

Texas has plenty of returning points even apart from last year’s seniors, but on paper it looks like they will be facing another tough battle with the Cal Bears, especially after most of the key players from Cal’s monster Class of 2021 announced they’ll be coming back for a 5th year. Jiang’s return will especially help the Longhorns fill in the relays. In between Jiang, Chris Staka, Jake Sannem, and Austin Katz, seniors accounted for 11 of the 20 Longhorn relays spots at last year’s NCAAs.

The Longhorns are deep in 200 freestylers, so it shouldn’t be a problem replacing Katz and Sannem on the 800 free relay. Freshman Anthony Grimm will probably slot into the backstroke slots on the medleys, and can fill in on at least the 200 free relay. Still, there wasn’t yet an obvious replacement for Jiang on the butterfly legs for the medley relays. Drew Kibler swam fly in the 400 medley relay prelims in 2019, although he’s primarily a freestyler, and Zac Van Zandt qualified for NCAAs with a 45.8 100 fly, but he ended up as 1 of 10 Texas qualifiers who had to be left home due to NCAA roster limits.

Jiang, a Texas native, swam at the University of North Carolina for his first two years of college before transferring to Texas for his junior year. He was an immediate success for the Longhorns, ripping a sub-44 fly split, one of the fastest ever, at the Longhorns fall invite, and was poised for a big 2020 NCAA Championships before they were canceled due to the then-burgeoning pandemic.

I was surprised to read that he’s the first from Texas men to use the bonus year, especially now that Eddie’s back.

I thought the same thing over the past year. He has a beautiful and long stroke and powerful underwaters. I just wish he could ramp up the tempo a little bit and glide less into his turns and his finish.

Yeah….it’s going to be a good one.

Do we know for sure that Staka is gone?

Texas has Grimm coming in. Better 50 than 100, but get him healthy and in a college training environment and good things may happen

Staka is done collegiately. The baton has been passed on to Grimm for those medleys.

So happy to have you back Alvin! 🤘🏻

Cal will be just fine, thanks!

Cal swimming going for the 4 peat.

So deep and featuring some international stars I feel like we wouldn’t normally see in the NCAA – Minakov and Burdisso especially.

@samuelHuntington You name Minakov but skip the guy who beat him for the bronze medal at the Olympics?

Together Jiang and Windle bring back 80+ points. And I think there will be more.

The Vols will take em down

Wonder if Katz and Staka are thinking it over

They both have reason to return. Staka only got 1 NCAAs with Texas, and Katz’s last year was hampered by health issues. But I’d imagine the education side of it plays a big role in the decision.