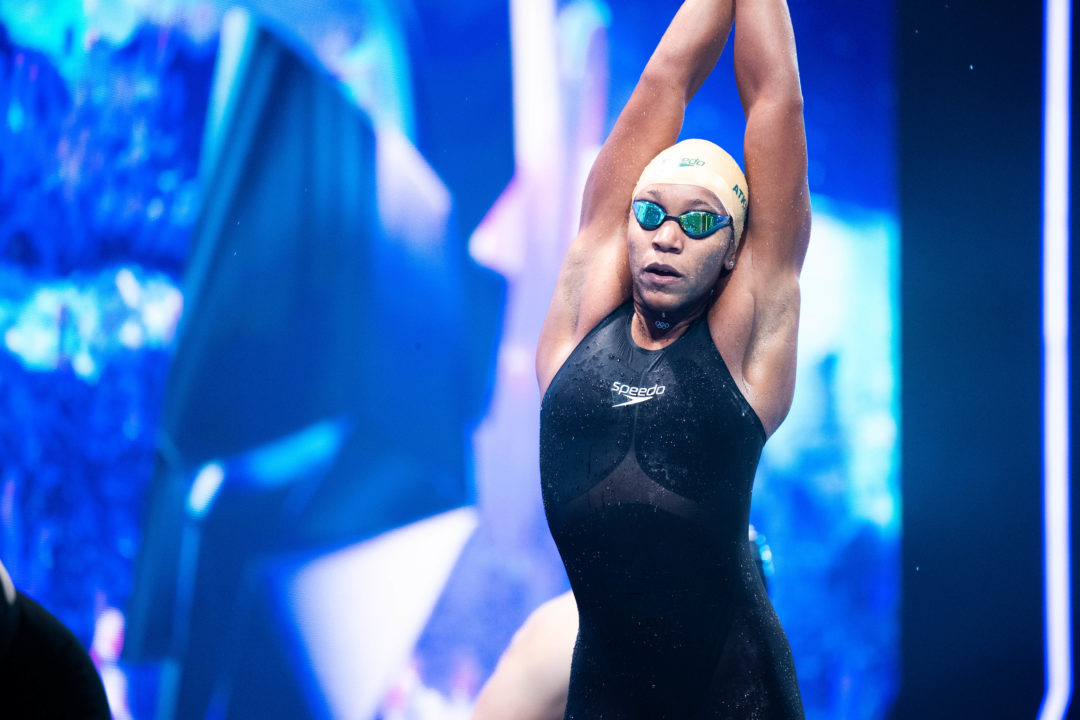 The ISL’s new jackpot rule allows winning athletes to steal the points of other swimmers if they win by a large enough margin. The rule has added drama to the league – but it’s also led to some illogical outcomes, like New York Breaker Joe Litchfield making it all the way to round 3 of the multi-round skins race, but scoring less than the two Cali Condors he eliminated head-to-head in round 2.

“It’s really difficult as an athlete to give your best for your team… and then all your points are stolen,” Atkinson said. “And you just swam that race for no reason.”

“But I’m sure there’s a reason,” she continued. “I’m sure it creates excitement and a fire in the other athletes to keep on going.”

That’s not just sour grapes from Atkinson, who hasn’t been jackpotted yet this year. (In fact, Atkinson has actually benefited in both points and prize money from the new format, jackpotting one swimmer in her 50 breast win, another in her 100 breast win, and earning jackpot points off another team’s disqualification in the women’s medley relay.) If anything, Atkinson’s critique of the format is a strong indicator of athlete sentiment, when even a high-profile beneficiary of the rule is pointing out its flaws.

Still, Atkinson was measured in her critique, acknowledging the fan-excitement benefits of the jackpots and suggesting we’d continue to see how the rule plays out as the season progresses.

London goes 1-2 for a second-straight race as this second meet is looking more and more lopsided. Kameneva is a new addition for London, and won this race by a tenth over breaststroke star Atkinson. But the field was definitely weaker than in match 1, where Kameneva would have only been 6th overall. It was a pretty breaststroke-heavy field, with a good number of primary breaststrokers added, to mixed results. That may have to do with the event lineup – breaststroke is the only stroke without an individual event in this session, and that might make breaststrokers a popular 100 IM entry for much of this season.

Atkinson has been dominant in sprint breaststroke, and she pulled this one out even coming off the 100 IM not too long ago. Atkinson was 1:04.21, timing her finish perfectly even as the field closed on her late. The Aqua Centurions have been able to rely on their breaststrokers, and they go 2-3 here with Carraro almost running down Atkinson.

If you use the variable speed playback on YouTube, you can slow it down & hear her better.

I appreciate the ISL needs to find ways to interest a wider fan base, but simply making the rules more complicated is not going to solve the problem. You don’t see Julio Jones getting extra points for insane touchdown receptions.

They need a truly clear cut meet format. There has to be size limits on rosters to create an element of strategy, and a points system that is accessible for the average viewer. Right now they’re trending toward what FINA has created with the world cups and champions series: the top athletes rake in the points and prizes, and the lower tier athletes get stiffed.