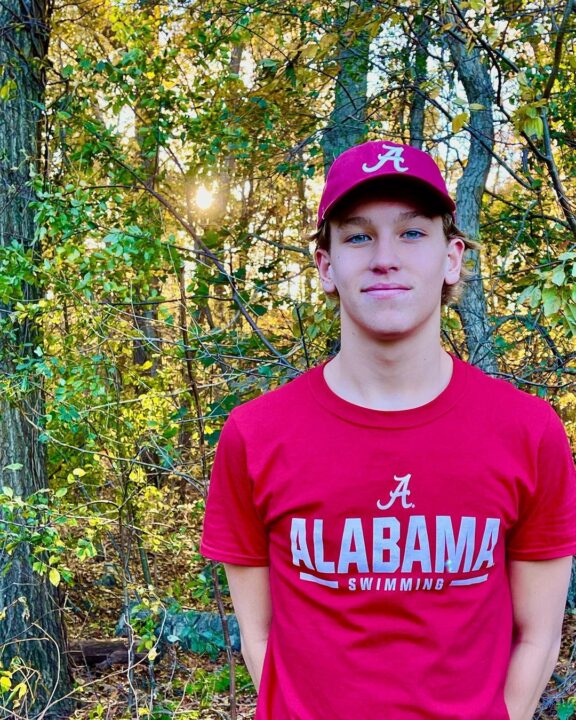 Hagar will be a big addition to the program's butterfly and backstroke groups when he arrives on campus in the fall of 2023.

A member of the class of 2023, Tommy Hagar of Braintree, Massachusetts has announced that he will be heading to Tuscaloosa in two years, committing to swim at the University of Alabama. Hagar is currently in his junior of high school and does his club swimming with Commonwealth Swimming.

Hagar will provide the Crimson Tide with strong depth across all of his events when he arrives on campus in two years. His biggest contributions will likely come in the 200 fly and 200 back, with his current bests being only just outside of what it took to score points at the 2021 SEC Swimming and Diving Championships. Both of those events were among the team’s best at that meet, with the program scoring 78 of their 841 points in the 200 back. While the top two finishers for the team in that event, Jake Marcum and Matt Menke, will have both graduated prior to Hagar arriving on campus, Eric Stelmar will be in his senior year during the 2023-2024 season. Stelmar was a B-finalist in the 100 and 200 backstrokes last season as a freshman.

Joining Hagar in the class of 2027 will be Connor Carlisle and Ben Kutufaris.

While Alabama is currently in it’s first season under first time head coach Margo Greer, the team doesn’t appear to have slowed down. Based on SwimSwam’s Scored Mid-Season NCAA Psych Sheet, the Crimson Tide are predicted to finish in 8th at the NCAA Championships later this season.

Hagar, the Red Rocker! Fitting that he goes to ‘Bama! #greenaintmeancomparedtored

Michael Deans & Gavin Lindley will also be joining the team next year.