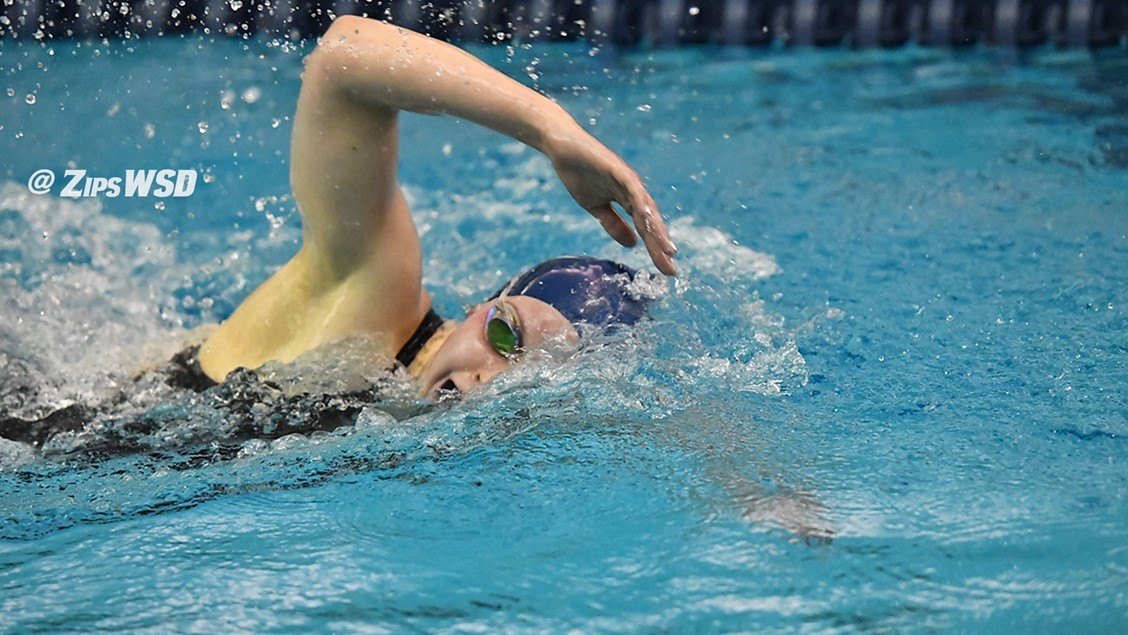 The University of Akron swimming and diving team earned a 140-100 victory over Bowling Green in Mid-American Conference action on Thursday evening at Ocasek Natatorium. Current photo via Akron Athletics

Futures qualifier Ella Epes will join the University of Connecticut class of 2026 with times that would already score for the Huskies at conference.

AKRON, Ohio – The University of Akron swimming and diving team earned a 140-100 victory over Bowling Green in Mid-American Conference action on Thursday evening at Ocasek Natatorium.

The 400 medley relay team of junior Morgan Waggoner (Fremont, Ohio), sophomores Paula Garcia (Madrid, Spain) and Paulina Nogaj (Radom, Poland) and senior Ragen Engel (Springfield, Ohio) swam to a victory in a time of 3:46.69 to kick off the dual.

Akron recorded the top two time in the 1,000 freestyle with senior Emma King (Centerville, Ohio) touching the wall first in a time of 10:22.59 and junior Jessica Bonezzi (Wooster, Ohio) coming second at 10:22.97.

Two Zips, Engel and Waggoner, tied for first in the 50 freestyle with a time of 23.91, with freshman Avery Movold (Prince George, British Columbia) taking third in 23.93.

In the three-meter diving, Bowling Green’s Talisa Lemke won the event with a score of 320.10, while senior Karly Crail (Edgewood, Ky.) was the top Zip in the event, taking second with a score of 294.07. Junior Katelyn Applin (Dansville, N.Y.) placed third, earning an NCAA zone cut with a score of 280.65 and freshman Kamryn Goodrick (Chesterland, Ohio) finished fourth (264.15).

Nogaj finished the 200 butterfly in 2:00.46 to take top honors, while junior Mackenzie Vargas (Roseville, Calif.) touched the wall at 2:07.52 to take third. Fazekas carried the Zips’ momentum into the 100 freestyle, where she took first with a time of 51.97.

Bowling Green’s Daisy Platts earned the Falcons first victory in a swimming event, touching the wall in a time of 1:59.04 in the 200 backstroke. Akron garnered second and third, with Movold touching second in 2:01.01 followed by Gardner (2:02.36).

Back on the boards, Lemke also won the one-meter diving for BGSU with a score of 304.57. Goodrick earned second for the Zips, recording a score of 273.30.

The 200 freestyle relay team of Engel, Fazekas, Watson and Henell capped off the dual with a win after touching the wall with a time of 1:32.65.

The Zips return to action tomorrow, Friday, Feb. 1, as they host Ohio in their final regular season meet. The action is slated to start at 5 p.m. Prior to the dual, Akron will honor its senior class, beginning at 4:45 p.m.

BOWLING GREEN, Ohio – The Bowling Green State University swimming and diving program came up just short, losing 140-100 to Akron. The Falcons made a late surge, but were held off in the end. Once again, Talisa Lemke led the Falcons, totaling 18 points for the second consecutive meet. The loss moves Bowling Green to 7-4 on the season, with a 1-2 showing in MAC competition.

Up Next
The Falcons will continue their MAC play Friday, Feb. 1 when they travel to Buffalo for another dual meet, starting at 4 p.m. The two MAC rivals last met in 2016-17, with BGSU coming up just short to the Bulls, 187-113. Buffalo will enter the contest with a 1-4 record, including being 0-2 within the MAC. On the course of this season, they have lost to Akron and Eastern Michigan, with their lone win coming against Duquesne. This will be the Bulls’ final meet prior to the MAC Championships.