After Dust Settles at US Trials, Australia Is Still the Women’s 4×100 Favorites 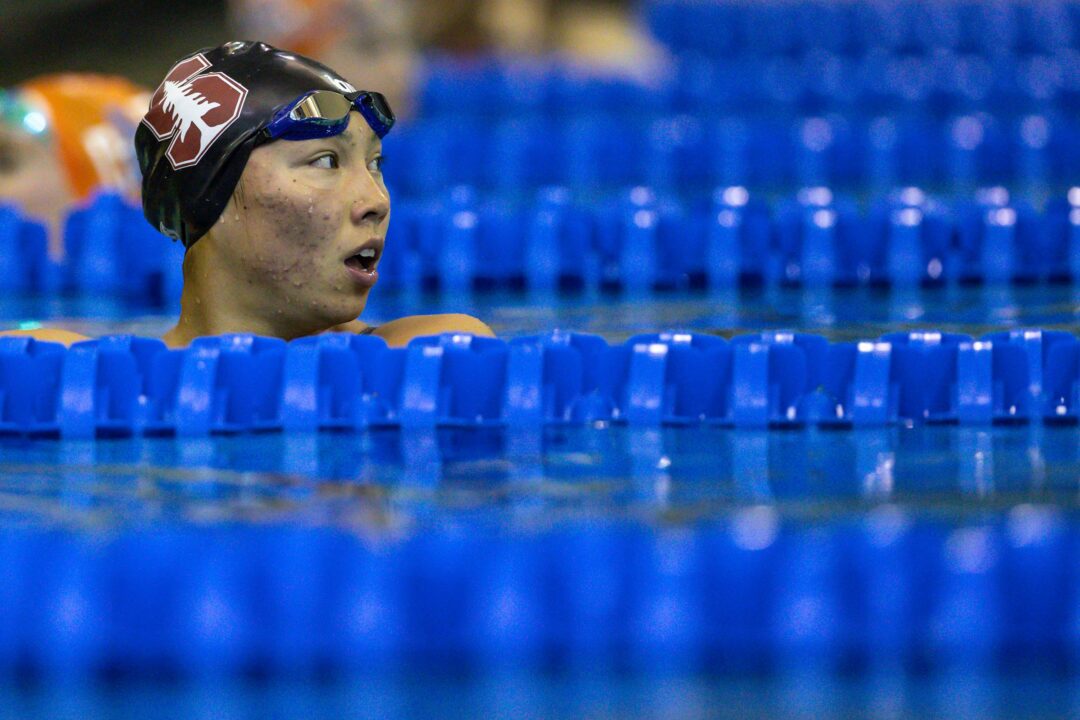 A personal best by Torri Huske led a slew of positive stories for the U.S. in the women's 100 free final, but none of it seems like enough. Archive photo via Jack Spitser/Spitser Photography

The American women went in to the 2022 US Trials with a big question: do they have enough to catch the Australians, or the Canadians for that matter, in the 400 free relay, with both teams short-handed headed toward Budapest.

So far, the pathway to a gold medal at the World Championships isn’t obvious.

It’s not that there weren’t good swims by the Americans. The next two big things for American sprinting, Torri Huske and Claire Curzan, finished 1-2 in the race, with Huske (53.35) going a personal best coming off the college season, and Curzan (53.58) just-missing her personal best.

Kate Douglass, the NCAA’s second-fastest swimmer in the 100 yard free last season, bounced back for a 53.99 and 5th place: her first time under 54 seconds in this event.

Erika Brown was very close to her personal best, as was Natalie Hinds, even after changing her training back to Florida post-Trials.

The 6th-place finisher, Mallory Comerford, went another best-in-years time of 54.09 to give herself a shot at the roster (she will have to wait to see how many doubles appear before she’s guaranteed a spot).

All of these are very good things for the Americans. Yet, the gap between them and the Australians might have gotten even bigger.

That’s because the US will be without the only two American women who have been under 53 seconds on a flat-start since 2018 Pan Pacs: Simone Manuel and Abbey Weitzeil. Weitzeil added from 54.19 in prelims to 54.41 in finals, finishing 7th (though her prelims time would have also placed 7th).

And so the Americans are left with a lot of women who can go solid 53s, but none of the 52s that they badly need to close the gaps on their primary competition.

Australia will be without at least Emma McKeon and Cate Campbell, half of its World Record setting finals relay from the Olympics. Even before their Trials, Australia’s best this season would have been 1-5-5-6 at US Trials, and all four of those swimmers are, so far, still in for the World Championships.

With Meg Harris appearing to be on her way to health after an injury earlier this year, and Shayna Jack back on her meteoric trajectory from before a doping suspension, the Australian women have an embarrassment of riches in the 100 free. While Canada’s fate balances on a razor’s edge and will depend largely on the health of Maggie MacNeil’s fractured elbow, Australia is resilient to the absence of swimmers like McKeon and the Campbell sisters.

The United States’ best hope at a gold in this event at the World Championships now is Abbey Weitzeil qualifying later in the meet in the 50 free. That would then leave U.S. coaches with a day 1 gamble about whether to use her in this relay, though with only 1 individual event there would be no reason to not give her a prelims-relay test.

There’s probably a little room to grow for the top four here from Trials in the two months between now and Worlds, but it feels like tenths for each, and not enough to add up to what the Americans would need to fight off Australia. Barring a radical shift between now and Budapest, it looks like the Australian women’s dominance in this relay will continue, even if it’s not with a World Record.

Just throwing this out here: Katie Ledecky split 52.6 and 52.7 on the free relay at Rio in 2016. If she is indeed returning to her old form (her 200 free final will be a strong clue as to whether or not that is true) then perhaps a slot goes to her? Her Rio split was faster than the split that three out of the four swimmers on our 2020 Tokyo relay had (Abbey also had a 52.6).

My concern is if huske and curzan make the team I’m the 100 fly as well, which means they will be swimming the prelims and semis on day 1 along with the 400 free relay (Alicia courts did the same thing in 2012 and 2013, most notably in 2013 when Romano ran her down the last leg and counts swam 5 events and ended up 2nd in each one) best chance to beat the Aussie is to have 4 fresh swimmers but then again last year th Aussie made the mistake and did a complete relay swap on the 800 relay and it cost them not only gold but silver as well

So they would have 1 fly prelims, then 1 fly semis and the relay at night? That doesn’t seem too bad, especially for people with experience doing doubles, unless they are back to back.

I still think Douglass and/or Comerford are both capable of going at least 53.0 on this relay. I don’t know how much faster obviously and time will tell

I think it best to wait for the Aussies Trials before we can compare the times.

Probably, yes. However, a few of the US girls swam at or close to PBs. If MOC, Meg and Madi are anywhere near their Tokyo times they should kill it.

Agree with regards to getting a more accurate read as to how it will actually play out at Worlds. IF AUS Trials do prove pedestrian then the odds of an “off-year” upset will definitely shorten.

What this US Trials did, however, indicate is that whilst there will be some personnel changes to the US line-up; the times have not as yet made any advance from last year let alone narrowing the gap to a full-strength AUS.

However, my only take on this is that both Huske ^ Curzan are young & improved their times, while the older swimmers didn’t make any advances, I’m still expecting the young swimmers Harris & O’Callaghan & even Shayna Jack to improve their PBs, if they do so, then a no show as that will be 3 girls in the 52s.

The level difference between US men and US women in the 100 free is astonishing as usual.
At the top but also in terms of depth.
Being sub 55 on the women’s side and sub 50 on the men’s side is no more a thing but it’s interesting to note that we have 12 US women under 55 and 24 US men under 50.
And 5 US women under 54 and 12 US men under 49.
The US men’s relay is always the favorite or in the top 2 favorites for the gold at worlds and olympics while the US women’s relay is humiliated at olympics since 2004.
Maybe that’s a problem of lack of… Read more »

Maybe, maybe some other countries are just better, like Australia & they have depth, a 15 year old in this month’s Australian age nationals would’ve got 6th or 7th in the US trails.

Maggie was a 53.1 but with her injury I didn’t wanna add her.

Certain facts are self evident when it comes to this event in 2022. IF AUS is going to take a loss on this relay, then this is the year. The absence/loss of the 3 fastest ever 100 free relay splitters means you’re going to take a significant hit, whatever way you look at it.

Having said that. it’s hard to quibble with Braden’s read. Whilst we have some newer faces coming forward for this US relay, as yet the times aren’t really sending out a message that “we’re coming for you”. Rather, they are merely on/around par with the “in season” times out of AUS.

Do I expect the US quartet at Worlds to be faster ? That’s a fair… Read more »

Honestly, I don’t want Jack to get an individual spot. I feel sorry for her and legitimately believe that she didn’t deliberately take any banned substance. But the fact is that that story is going to follow her forever and her swimming individually will just be a distraction from the rest of the team. Would be great for her to get a relay spot and be able to contribute, especially with the great progress she has shown this year, but I’d rather see Meg and Mollie step up to the plate.

Agree with regards to her NOT gaining an individual spot. Would much rather see the likes of O’Callaghan, Harris consolidate their places if not progress as well as any next generation names.

One hundred percent concur regarding the potential distraction factor. The likes of Sun Yang & Efimova have been the relative outliers with regards to those who have returned post suspension or being under the microscope, and have held up. Most have “folded”.

Disagree somewhat with regards to culpability. Whilst I will concur that its exceedingly unlikely she was actually engaging in anything truly nefarious as regards to intentional doping; the reality is that supplements can be a very grey area and having been around elite performance for some… Read more »

Hopkin went 52.75 flat start last year and has been 52 low. She’s GB’s X factor. Wood went 53.5 and 53.1 splits last year. Anderson has been disappointing as we expected her to be a sub 53 swimmer. She has been sub 53 splits a lot tho.
The 4th leg is a problem tho. At the europeans last year Lucy Hope went 53.89 from a flat start but split 54 high at the Olympics. If she could regain that kinda form we’re medal contenders for sure, but am not convinced about that 4th leg.
Ideally: 3:32.1

Your read is similar to mine.

GBR ARE, most certainly, the “new girls on the block” as regards contenders on this relay (with Kromowidjojo and Heemskerk departing for NED) and definitely must be respected.

Hopkin and a fit Anderson are options that any other country, bar perhaps a full-strength AUS, would love to have in their finals quartet …… and even AUS would like to have them as options.

Wood was very solid in Tokyo and, off that evidence, doesn’t give away much to similar seeds from USA/CAN but until Hope, or someone else, can nail down a consistent sub 54 leg; then they’re realistically relying on one of the current Big 3 dropping a “clanger” in order to… Read more »