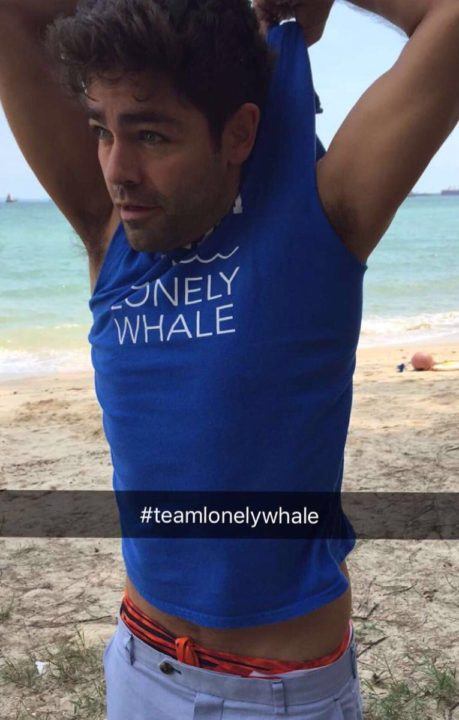 Earlier today, Entourage star Adrian Grenier and Virgin Group founder Richard Branson took on a 3.3 kilometer open water swim across the Strait of Messina in Italy as a part of the Strive Challenge and to raise awareness for the Make a Splash Foundation and Lonely Whale.  Grenier, who notes that he only started swimming on World Ocean Day (June 8th) of this year, is a known political activist and philanthropist, in addition to his impressive acting résumé.  Richard Branson, eccentric billionaire founder of Virgin Group and its many subsidiaries, has also been a career-long champion for environmental protection.

The swim, which was undertaken as a collaboration with Lonely Whale, an organization which seeks to “[Bring] people closer to the world’s oceans through education & awareness, inspiring empathy & action for ocean health & the well-being of marine wildlife,” and the Strive Challenge, which seeks to bring people together, uniting them by common values and shared goals that will benefit not only those working towards them, but the world as a whole by promoting a “growth mindset.”  Strive works in collaboration with Big Change, an organization that champions changing minds as the most successful way of achieving ‘big change’ in the world.

Grenier and Branson’s swim was recorded on Facebook Live and can be viewed in the links below:

Swimming the Strait of Messina, Part I

Swimming the straight of Messina in support of our ocean and Lonely Whale. #MakeASplash and help us bring ocean eduation, inspiration, and awareness to all.

Grenier has tweeted at Make A Splash multiple times today.  Since the Make A Splash Foundation was created by USA Swimming in 2008 the initiative has been championed by many national team and Olympic team members, but probably none more so than Olympic Gold Medalists Cullen Jones and Simone Manuel.

Background: I only started swimming on #WorldOceansDay this year. Do you think I'll make it across the 3.3km Strait of Messina? #MakeASplash pic.twitter.com/F48uTS2cin

Grenier noted that while swimming he saw both a plastic bag and a balloon, drawing attention to the illusion that, no matter how seemingly “pristine” an environment, it is not immune to polution from human activity and careless disposal of waste materials.

Grenier and Branson explain the motivation for their swim in this video:

Thanks for inspiring us this summer with your #MakeASplash photos & videos! Tomorrow Adrian Grenier and Richard Branson will partake in the Virgin Strive Challenge swim. Join them by tagging #MakeASplash and sharing why #westrive for ocean health.