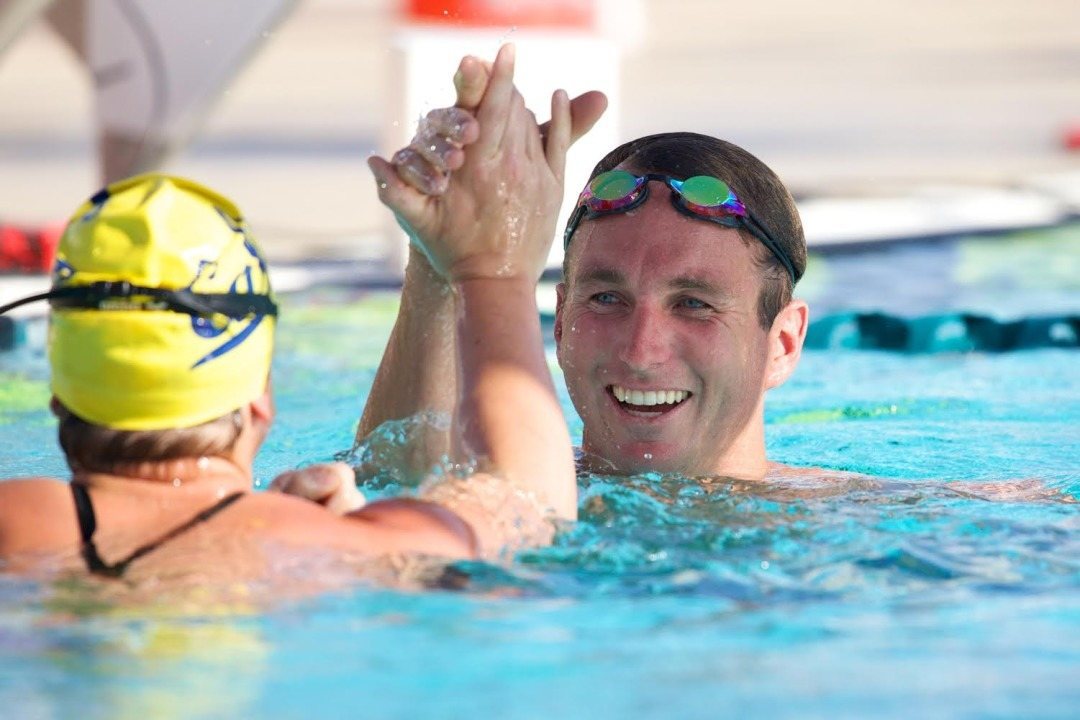 Aaron Peirsol has worn many hats in the world of water, and this week he’s added one more to that... Archive photo via Rafael Domeyko, rafaeldomeyko.com

Aaron Peirsol has worn many hats in the world of water, and this week he’s added one more to that pile: high school swim coach.

Peirsol was announced on Friday as the new head coach of the Newport Harbor boys’ swimming team according to the Daily Pilot, which means he’ll become the coach of the same high school that he attended over a decades ago.

Peirsol retired from competitive swimming in 2011, at the time saying that he “ended up doing everything that he intended to do.” That included winning 5 Olympic gold medals (7 overall) and 16 World Championships. He remains the current World Record holder in the 100 and 200 meter backstrokes in long course.

While the team isn’t at quite the level they were back then (they were Division I champions during Peirsol’s senior year), they still consistently send swimmers to the CIF meet. Last season, the boys’ team scored 34 points and wound up in 25th place. That included a 12th-place 200 free relay, a 14th-place 400 free relay, and an individual 10th-place finish from Hayden Hemmens in the 200 free (1:39.45).

What’s most exciting for Peirsol’s tenure is that all four of their CIF qualifiers last year were just sophomores, meaning that they still have two years left with the program (typically).

Since retiring, Peirsol has spent time doing a lot of charity work involving marine habitat preservation, and has also worked as a Newport Beach lifeguard.

Peirsol replaces outgoing coach Robert Lynn, who had been the boys’ swimming and water polo coach. The plan is still to hire a separate boys’ water polo coach, and Brian Melstrom remains the head coach of the girls’ swimming program: a post that he has held for 7 years.

Well, I hope if Aaron has swimmers with Aspergers or ADHD that he will help them. Recently with all the tests I have taken to try to get disability I had one psychologists say I have Aspergers and having some therapy sessions now with some people who claim th have Aspergers I think I have. Aspie types of swimmers are probably not all the best. And as a kid they thought I had ADHD but some tests don’t show attention problems. Swimmers like Michael Pehlps have that condition-ADHDPeople sometimes do think that you are odd with either Aspergerss or ADHD.

He also has a World Record in the Long Course Medlay Relay, I think?

That’s news to me Mel, when did he lose that? Maybe this week?

I agree! That is one luck high school team. Aaron did a swim clinic with our club team many years ago. He was fantastic with the swimmers.

Yeah, really. Don’t know how they missed that one- unless someone broke it in the last 5 minutes!

Agree, what lucky kids at this highschool to have such an awesome coach!! When our daughter swam at her high school, she had a coach who never was even a swimmer. She played water polo. Would have loved to have Aaron as our coach!!

What a great win for this HS. I have every confidence he will be a fantastic swim coach. Lucky, lucky kids!

Swimming idol of my mother. 🙂