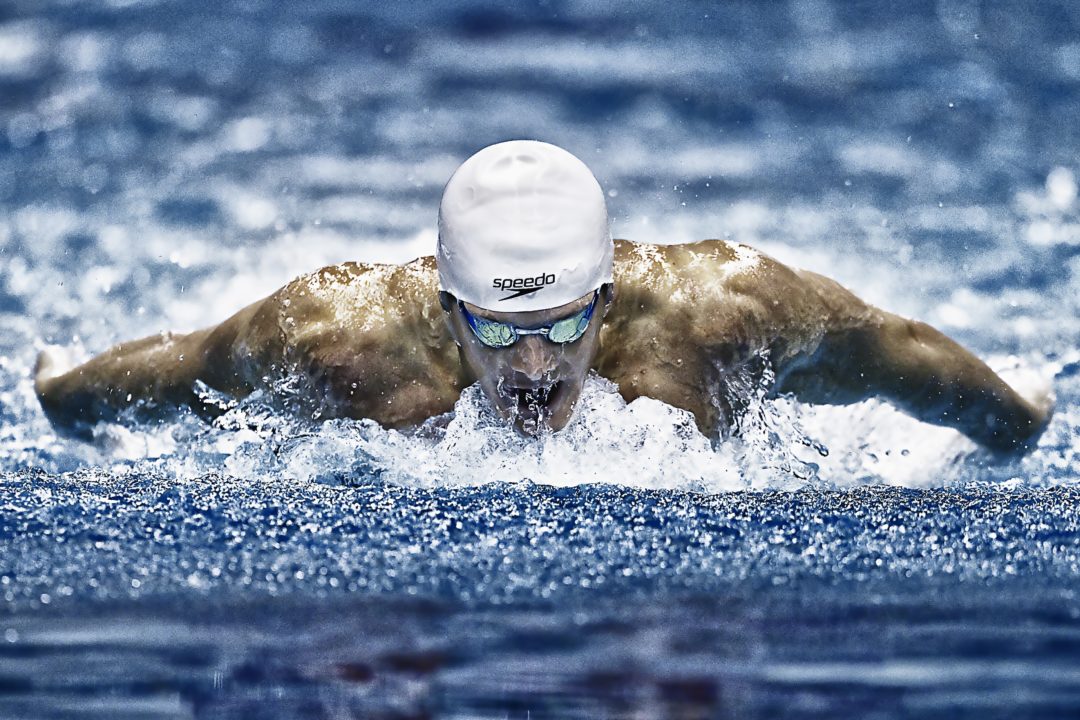 Even without Phelps and Lochte, Tyler Clary should get a good test in the 400 IM in Santa Clara. (Photo Courtesy: ©Tim Binning/TheSwimPictures.com)

The 45th edition of the Santa Clara International invitational is living up to its name in an Olympic year, as it often does, with an absolutely stacked international field. Though the American ranks have thinned considerably for this meet, as many swimmers will be in Austin, the international field is second-to-none relative to any meet we’ve seen on US soil in 2012.

There will be swimmers in attendance from Australia, Canada, Japan, Mexico, the UK, South Korea, and New Zealand. And we’re not talking about just the usual cast of American-trained internationals, or swimmers sneaking into the Olympics on FINA provisional times. These are the bona-fied stars of their native countries.

Combined with the major teams from the US – Cal, Stanford, Fullerton, Florida/The Gator Swim Club, a portion of USC/The Trojan Swim Club, and a smattering of elite swimmers from other programs – the field in Santa Clara is probably good for no-fewer-than 100 Olympic finals swims.

A big absence from the meet is Ryan Lochte; he was expected to be at this meet with his Gator Swim Club teammates.

The number of stories at a meet this big are endless, but we’ll do our best to narrow it down to 5 things that you really should be watching for.

1. Clary Tested in 400 IM – If American Tyler Clary wants to be able to challenge Ryan Lochte and Michael Phelps for a spot on the Olympic Team, now is the time for him to really start honing his racing skills. He hasn’t gotten much of a good race in this event this season, other than the Indy Grand Prix where Phelps showed up ready to race. In this final Olympic tuneup, Japan’s Yuya Horihata will give Clary a good last warmup for the big meet. That’s because like Lochte and Phelps, he’s got an outstanding back-half to his IM. He’s a great breaststroker and freesytler – which is why he’s ranked 2nd in the world this year. Clary should get out to a lead, and will have the opportunity to try and hold that lead.

2. Women’s 100 Free Field – The final of the women’s 100 free should be unbelievably-good. Take a lok at the names: Libby Trickett, Emily Seebohm, Yolane Kukla, Bronte Barratt,and rising star Brittany Elmslie representing the Aussies; Natalie Coughlin, Dana Vollmer, and Jessica Hardy; and former NCAA Champion Julia Wilkinson from Canada. This could be the deepest field in the women’s sprints that we’ve seen at a Grand Prix meet yet this year.

3. Park Gets a Push in 400 Free – After we saw a magnificent 3:44 from South Korea’s Tae Hwan Park at the Mel Zajac Jr. International, where he was swimming basically alone, there will be a lot of eyes focused on his encore in California. Can he do it again? In this meet, he’ll be pushed by Canada’s best Ryan Cochrane and Australia’s best Ryan Napoleon, as well as a trio from the United States’ best middle-distance training group: Matt McLean, Tyler Clary, and Michael Klueh.

4. Jasmine Tosky Shooting for a Full Trials Schedule – Palo Alto swimmer Jasmine Tosky has Olympic Trials cuts in 12 out of a possible 13 events. The lone hole in her schedule is the 100 backstroke – an event that she is entered in at the Santa Clara Grand Prix. If she can go a 1:03.99 or better in the 100 back this weekend, then she will be (likely) the only swimmer to achieve this for 2012. She was a 1:04.30 two weeks ago at a long course trial after her high school championship meet in this very same pool, so the cut is not a slam dunk. Still, she would seem to have a very good shot.

5. 100 Backstroke Battle – Only six women in history have been under 59 seconds in the 100 backstroke, and three of them (Natalie Coughlin, Gemma Spofforth, and Emily Seebohm) will be in this race. Throw into that group Canada’s defending National Champion Julia Wilkinson, who is riding a high after breaking the minute barrier earlier this year for the first time, and you’ve got a great final shaping up. It’s about time, now three-weeks out from Trials, for Coughlin to start focusing on racing and for her times to come down. Seebohm, Wilkinson and Spofforth are more likely at, or just out of, their peaks as they’re 7 weeks from the Olympics. Give Coughlin the advantage, around a 1:00-low.

In terms of standings, and the quest for the big cash purse, Phelps has it locked up. None of the top four swimmers are entered in Santa Clara, and Dana Vollmer would have to win 10 races to catch Phelps.

Good for Jasmine Tosky if she has all these cuts. But the goal isn’t to swim in the biggest number of races. It’s to qualify for the olympic games. In the future she will be an incredible swimmer in IM races but for this year her best chances to qualify are the 200 free for the relay and the 200 fly. So she has to focus on these events.

No Lochte, Beisel, Dwyer, PVK. Any idea if/where they may be going. No final tune up?

gatorfan….Lochte/Dwyer are producing workout videos and tapering. Ha!!! (Seriously, not sure, but we’ll ask around. I’m sure they’ll do a test meet somewhere.)