5 Storylines to Follow at the 2019 Pro Swim Series – Bloomington 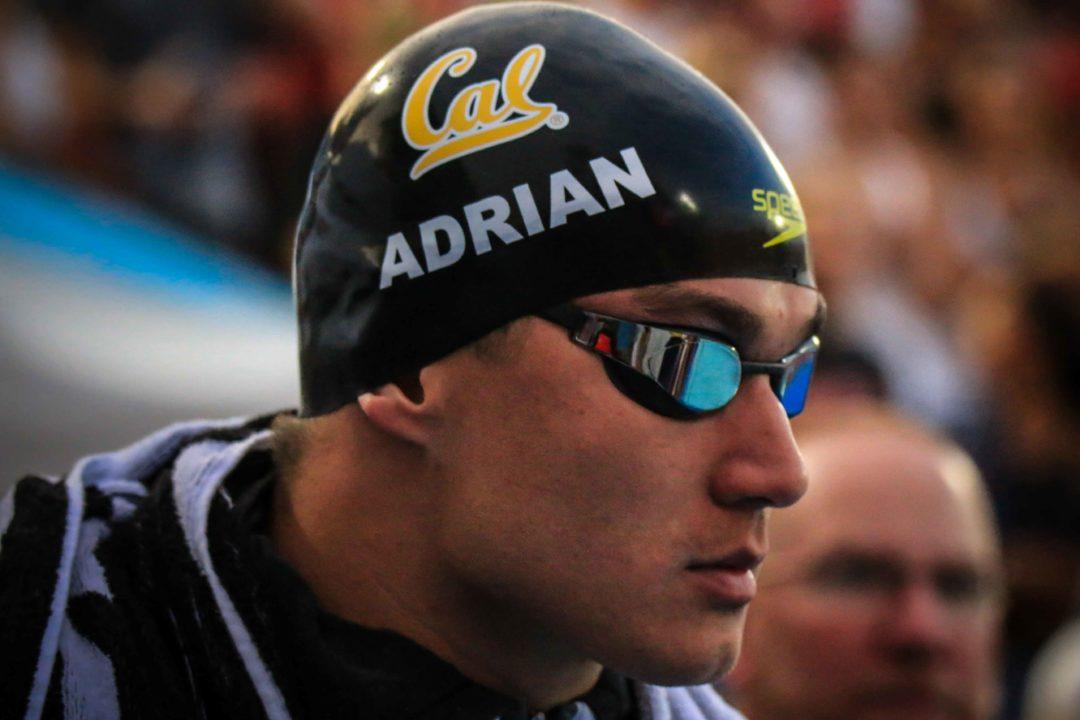 Nathan Adrian is back! Archive photo via Jack Spitser/Spitser Photography

One of two high-profile meets going on this weekend in the United States, here are five things to watch for at the Bloomington stop of the 2019 Pro Swim Series.

#1 NATHAN ADRIAN BACK TO RACING

We talked about this last week when psych sheets came out, but it’s a big deal (and a sigh of relief) to see Nathan Adrian back to racing. It’s awful for anyone to face cancer, but Adrian has committed to being public about his situation to draw attention to men’s health issues. After his January surgery, he went back to light working out a week later, and then eventually back to practicing. With his PET scans coming back clean in April, he’s back to his normal routine.

It’s unclear if Adrian will race this summer, as he’s slated to race at Pan Ams as well as at Worlds, the latter as a relay-only swimmer. That isn’t the priority right now, though. It feels very good to see him back on psych sheets, and his health scare puts into perspective 1) how important it is to check for testicular cancer (more info here) and 2) how much of an icon and role model he has been in the sport.

Olivia Smoliga has been on fire in the sprint backstroke this season, and while she will be racing at the Atlanta Classic this weekend instead, the backstroke talent here in Bloomington is quite astounding nonetheless.

The big names in long course are Taylor Ruck and Regan Smith. Ruck is coming off of a successful debut NCAA season, and she finished a close second to defending 100 back Pan Pac champion Kylie Masse in both backstrokes at the 2019 Canadian Trials. Smith held both the 100 and 200 backstroke American records in yards this spring, and while her 100 record was broken by Beata Nelson at 2019 NCAAs, she still owns the mark in the 200. Following a long line of outrageously fast teenage American backstrokers on the women’s side is Smith, and her battles against Ruck here should be very fun to watch.

Lilly King hasn’t raced since NCAAs, where she unleashed an AR 55.73 in the 100 breast, won the 200 breast, and became the first woman and second swimmer to four-peat in both breaststroke races at NCAAs.

She has yet to announce a suit deal, but with Tokyo a year and change away, she can fully focus on her training and racing. King’s favorite Russian pen pal, Yulia Efimova, leads the world rankings in all three breaststroke events this season: she’s been 30.26 in the 50, 1:05.99 in the 100, and 2:22.52 in the 200, all from the Budapest stop of the inaugural FINA Champions Series.

King and Efimova had some virtual sparring going on last season, chasing each other’s season bests, albeit at different meets. Knowing King, she probably has those benchmarks in the back of her mind going into this weekend.

Katie Ledecky doesn’t have a ton of close competition in the distance races without Leah Smith, a PSS regular, at this meet, but she’ll have a great race with Taylor Ruck, among others, in the 200 free.

Ruck dethroned Ledecky last summer at Pan Pacs, and we don’t get many chances to see the two go head-to-head in the regular season, which should make for some fun racing.

Throw in Siobhan Haughey, Mallory Comerford, and Simone Manuel, and all five of these women have raced at least one of the other four at NCAAs, with Comerford, Ruck, and Haughey being the most recent to tangle. Olympic record-holder Allison Schmitt and Gabby Deloof make for an even tougher field.

Although Michael Andrew has proven that he can, in fact, hold it together for a 200 IM, he won’t be racing anything over 100 meters this weekend in Bloomington. Andrew swam at the first two stops of the FINA Champions Series abroad, and now $60,000 richer, he’ll compete here in Bloomington in all four 50s as well as the 100 back, 100 breast, and 100 fly.

It’s quite feasible that Andrew could win all of the 50’s, and it’s not unreasonable that he could win in the 100’s, too. Despite his newfound triumphs in the 200 IM, he confirmed with SwimSwam that he’s sticking with the 50’s and the 100 breast at Worlds this summer, so it makes sense that the 200 IM will be tucked away for now.

By the end of the swim season MA will probably have pulled in 200-250k, or more honestly, in just prize money.

If MA invest his money correctly and purchase a couple of rental properties he can be retired by 25.

While 200-250k is a lot of money, it supports his entire family, not just Michael. His winnings fund his parents’ retirement funds, health insurance for them and his sister, etc. Considering that, it might take a few more years to retire comfortably.

By now, Nathan Adrian is more than a swimming hero.
On the women’s side, beside the usual high range of performances from Ledecky (I don’t think there will be here a Ledecky vs Ruck battle in the 200 free), I expect interesting times from Regan Smith, particularly in the back races, Maggie MacNeil in the fly (recent 57″ low) vs the favorite Kelsi Dahlia, good breastroke races with Lilly King and Annie Lazor, and in the free with Manuel and Comerford.
Then the youngsters: Carson Foster, Adam Cheney, Dare Rose, Wyatt Davis, Emma Weyant. Isabelle Stadden.

For Ledecky it is a training racing exercise – 5 events from 100 to 800 and 400IM. But she usually tried by this time of the season get #1 rankings in her major events. Let’s see if it would be her goal in 400. I hope to see 8:12 her usual cruise control pace. Her 8:14 in Richmond didn’t look like she simply didn’t force herself and the explanation that she just returned from high altitude training sounded strange. I don’t think she is focusing on sprint at this point of training but it would be nice to see her under 55 in 100.
After sudden and very impressive return of Allison Schmitt last season will be nice to… Read more »

It’s a training exercise for all of them. No one’s viewing this as big taper meet.

According to Vloggy Miller some of the Indiana post grads are tapering.

Sure, who needs tapering in such type of meets to set National, American, Open or even world records.

Thank you. It’s so nice of you to inform us.
Sometimes such meets are a check point, sometimes they are used for exhibition purposes (Ledcky, May 2018), sometimes it’s a place to complete unfinished business like Ledecky did in Austin in January 2016 after affected by two world records in 1500 world championships in Kazan and Sjostrom’s claim in lead off leg of 800 relay.of being best 200 free swimmer.
Sometimes swimmers are forced to participate in such meets by sponsor’s contract agreement.
You know better than anybody else what can happen sometimes….