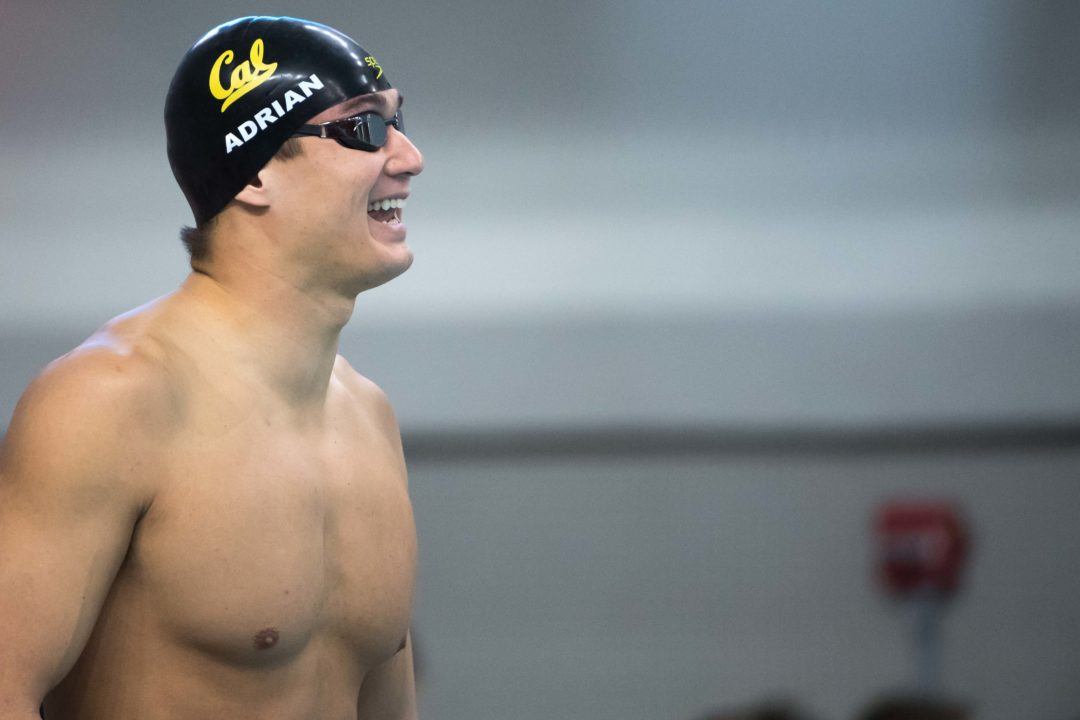 Less than two weeks after announcing his diagnosis and one after undergoing laparoscopic RPLND surgery to treat testicular cancer, Olympic champion Nathan Adrian has returned to working out. Archive photo via Mike Lewis/Ola Vista Photography

Less than two weeks after announcing his diagnosis and one after undergoing laparoscopic RPLND surgery to treat testicular cancer, Olympic champion Nathan Adrian has returned to working out, he posted on Instagram Monday afternoon.

Adrian, 30, wrote that he was “head to [his] first Dr cleared workout.” While it’s not quite the kind of elite swim training that he was doing before his surgery, a workout is a workout, even if it’s just rehab. The workout stayed in the gym, and per a later post on his account involved walking on a treadmill on an incline, some kettlebell work, and some lat pulldowns.

It may not be much, but it was a start! It felt great to get back to the @calathletics weight room where I belong! They have all the recovery modalities I need including the best Physical Therapist in the world so I can get back in shape soon 💪🏽💪🏽. Through this entire experience I have to say, waiting on pathology/test results might just be the worst part. There is anywhere from 2-14 days (depending on the test) of not knowing whether you will be whisked away into treatment ASAP or that you are cancer free 🤷🏽‍♂️. The best way to deal with that, however, is to fight the urge to stay in bed with the curtains closed all day. So, we went to a great Super Bowl party yesterday and today we were cleared by my doctor to start getting back on track (slowly but surely).

After the surgery, which took place January 29th, Adrian posted that his doctor said the procedure went well and that he was working to “get back to normal life as quickly as possible.” The laparoscopic RPLND (Retroperitoneal Lymph Node Dissection) procedure is considered minimally invasive compared to open surgery, typically bringing about a faster recovery time.

He also posted two days after surgery that he was able to walk 7,000 steps and was using electric muscle stimulation, which triggers muscle contractions, to help keep his strength up.

It may not be 7000 meters of swimming but we walked over 7000 steps today! May have had to take a nap to rest up between my two walks but hey we are making progress. And doing a bit of EMS to do what we can to not lose all of my strength while I recover 💪🏽

Adrian announced January 24th that he’d been diagnosed with testicular cancer and committed to publicizing his experience to raise awareness about men’s health causes. The three-time U.S. Olympian says he’s still aiming to make the 2020 U.S. Olympic team despite the diagnosis. He hasn’t spoken on his status for the coming summer, where he is qualified to represent Team USA at the World Championships as a relay swimmer and at the Pan American Games as an individual and relay swimmer.

It’s likely that his first workout post-cancer removal surgery is still harder than any workout I’ve ever done.

Probably flat benching 100lb dumbbells instead of his usual 130’s

Godspeed to a Titan among Champions!