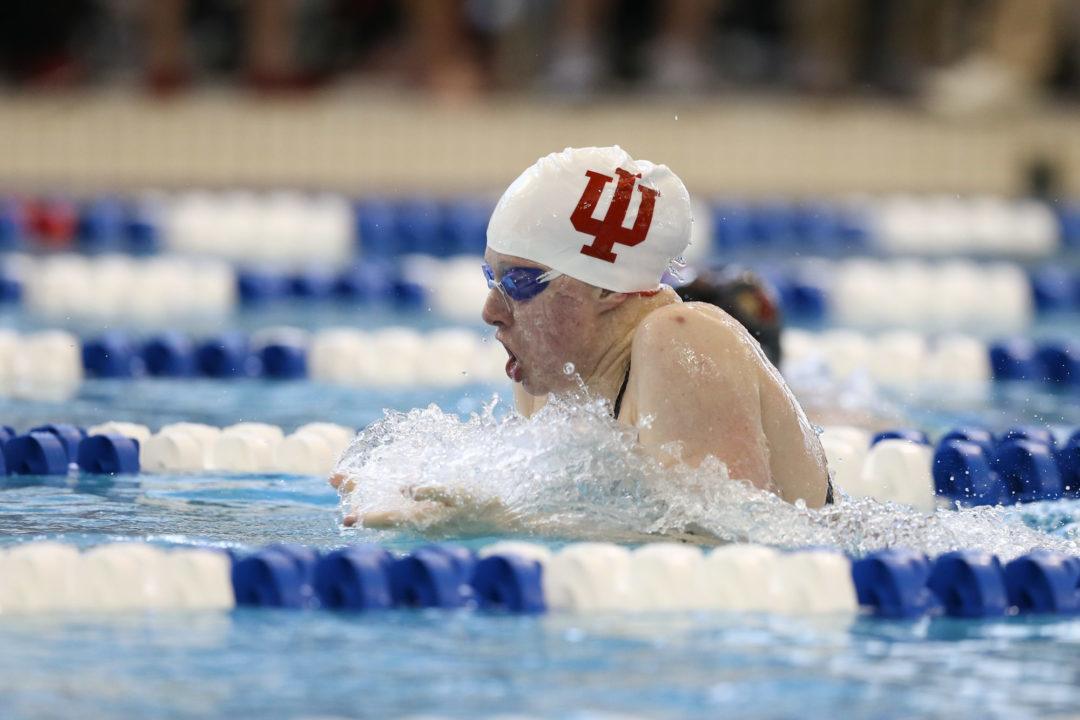 Lilly King is coming off a lifetime-best 100 breaststroke in Charlotte, and is one of America's fastest-rising swimmers heading into U.S. Olympic Trials. Archive photo via Tim Binning/TheSwimPictures.com

Indiana’s Lilly King is coming off a national record-setting freshman season in short course yards, and she just blasted a lifetime-best 1:05.73 in the 100 breast last month in Charlotte. She’s clearly the fastest-rising American breaststroker at the moment, but will run up against 2012 Olympian Micah Lawrence in both breaststrokes in Indy. Also joining the field is Hilda Luthersdottir*, who set all three Icelandic breaststroking records last month at the European Championships. Auburn’s Annie Lazor has also been red-hot lately, and beat King for the 200 breast title in Charlotte.

*Luthersdottir is entered both here and at the Tennessee Aquatics June Invite.

Santo Condorelli has been on fire since last summer, and just clinched an Olympic berth for Canada earlier this spring. He’ll try to add to his title from Charlotte in the 100 free, taking on a tough international field. Marcelo Chierighini and Joao de Lucca are carrying on the banner of Brazil’s legendary sprint group. Junya Koga is representing Japan, and the U.S. features former-football-player-turned-sprinter Josh Schneider and Mizzou’s Michael Chadwick, who broke out last summer with a 48.8.

Former college rivals will battle it out in the women’s distance races. Leah Smith was the NCAA champ for Virginia this past season in the 500 and 1650 yard freestyles. Georgia’s Brittany MacLean was second in both of those races while winning the 200, and just clinched a Canadian Olympic berth this spring. Indiana Hoosier alum Lindsey Vrooman was a few years ahead of that duo and battles them for Badger Swim Club in Indy. Also keep an eye on Michigan/Hong Kong swimmer Yi Birong, Vietnamese star Vien Nguyen and Georgia Bulldog Hali Flickinger.

The men’s breaststroke spots on the U.S. Olympic team are as wide open as any event, and almost all the top contenders will be in Indianapolis. Cody Miller has more sub-minute swims since 2014 than any American, but he’ll run up against the consistent Nic Fink. Missouri grad Sam Tierney is also competing, and even short course yard American record-holder Kevin Cordes is back, returning after a lengthy training stint in Singapore with renowned coach Sergio Lopez.

Bahamian Olympian Arianna Vanderpool-Wallace seems to be the big favorite, but she’ll be pushed by a crowd of Americans. Wisconsin Badger alum Ivy Martin is one of the top U.S. speedsters, and comes in with the second seed. Olivia Smoliga of Athens Bulldog is coming off a career year in the NCAA for Georgia in which she won the 50 and 100 free titles in short course yards. And U.S. butterfly star Kelsi Worrell is also in the mix as a dangerous sprint presence.

I’m most excited for the breastroke – it has many of the top contenders for two of the most wide-open events at Trials.

Agreed. King, Meili and Hannis are the favorites in my opinion.