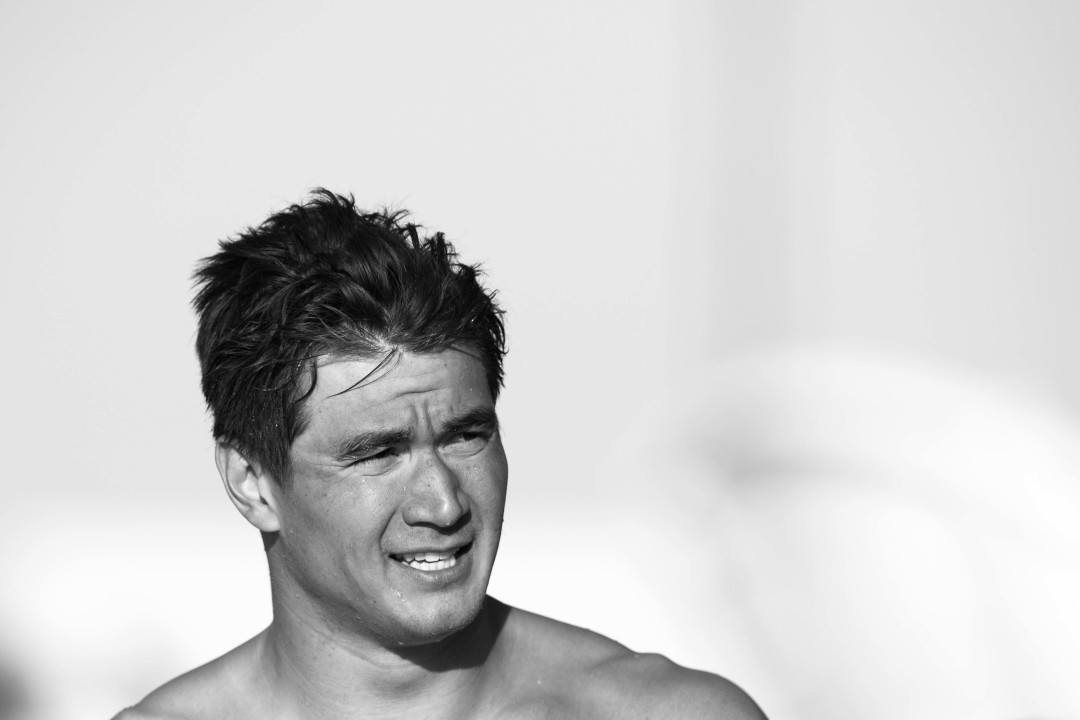 Nathan Adrian has swept the 50 and 100 freestyles at 4 of 5 Arena Pro Swim Series stops so far. Can he beat Australia's former world champ James Magnussen and junior world record-holder Kyle Chalmers to do it again in Santa Clara? Archive photo via Mike Lewis/Ola Vista Photography

The Australians have been nearly unstoppable in this event lately, and world champs gold and silver medalists Emily Seebohm and Madison Wilson are entered. But they’ll face veteran Olympian Natalie Coughlin, who was the fastest American last year despite not swimming the event at Worlds. To top it off, Coughlin is competing in front of a home crowd in California. Also keep an eye on Australia’s junior world record holder Minna Atherton (age 16), Canada’s Hilary Caldwell and American Olympian Rachel Bootsma.

The story is pretty much the same in both of these events. The U.S. has ruled the backstrokes internationally for years, but Australia’s Mitch Larkin looks like the strongest threat to end Team USA’s two-decade-long streak of Olympic golds. Larkin won’t face defending Olympic champ Matt Grevers (who is competing in Austin instead) or the fastest American of 2015 David Plummer (who is competing in Indianapolis instead), but will take on breakout NCAA star Ryan Murphy, who rattled the world record last year in the 100 back leading off a mixed relay. (Mixed relay leadoffs don’t count in FINA’s official rankings, leaving Murphy third officially behind Plummer and Grevers in 2015).

With depth aplenty in the sprint freestyles, the U.S. women need a superstar to rise for their 4×100 free relay to improve its Rio medal chances. A huge number of the potential candidates are competing in Santa Clara, including 19-year-old sensation Simone Manuel, the aforementioned Coughlin, 2012 Olympian Lia Neal, rising Cal sophomore Amy Bilquist and butterfly veteran Dana Vollmer. They’ll be pushed in Santa Clara by a few of Australia’s tough contenders: Brittany Elmslie and Madeline Groves carry in top-10 seeds, and Emma McKeon currently ranks #4 worldwide.

The men’s race should be equally entertaining. Here, reigning Olympic champ Nathan Adrian gets to flash his speed in the leadup to the U.S. Olympic Trials. Adrian has swept the 50 and 100 freestyles at 4 of the past 5 Arena Pro Swim Series stops (Minneapolis, Austin, Orlando and Mesa) and has an outside shot at the series points title with another sweep in Santa Clara. Former world champ James Magnussen is competing for Australia, looking to regain his 2013 form, and we get a rematch of the Chalmers/Rooney matchup, this time in an event more tailored towards Chalmers.

Adrian will win the 50/100 free no doubt in my mind, he’s been so consistent. People see cam and florent winning the gold but I have faith in Adrian he’s storing up for something big

I am with u also on that one – Adrian will be bad ass strong this summer in both races .

Has SunYang swum in the States before?

0
0
Reply
Hswimmer
Reply to  Swimmer A

Adrian should win the M100free. Chalmers could provide reasonable competition. Magnussen 2016 vintage (post op) is a shadow of the 2012 model

W100free looks anyone’s race. Elmslie currently has a faster season’s best than any of the Americans but her current condition may not be conducive to a fast time.

AUS trio of Seebohm, Wilson & Atherton could clean up the W100back unless a local is in better than 59mid shape.

Larkin v Murphy will be interesting. Larkin has shown a capacity over the past year of being fast in season so his times should be at least 53mid-low in the 100 & 1.55s in the 200. Much will depend on where Murphy’s condition is at this point.

Are the Santa Clara and Indianapolis Pro meets normally held on the same weekend?

Imaging someone talking about the race who has no knowledge of world ranking not understaind how a 11th seed is crushing almost all the field easily..

Fair enough points, McKeon has a season best exponentially faster than this field. However, she is not racing this event in Rio outside the 4×100 and her preparation will be more centred on her individual races (200free & 100fly) therefore she may not necessarily blow this field out of the water.

I think Gee and Rafael were talking about a Jared Anderson’s article, which completely ignores Emma mckeon.

And then mckeon destroy everyone, which would be really funny.

Oh, very valid points. Some of the writing on this site is prime entertainment value if nothing else !!

Its a possibility that Seebohm takes down Missy’s U.S. open record in the 100 back

Is it unusual that Lochte isn’t competing in any of these competitions? Or is his club as a whole not competing? Also, I haven’t paid attention in a few months: is Tyler Clary competitive in any races this year?

Why are there two stops of the arena pro swim series in the same weekend?