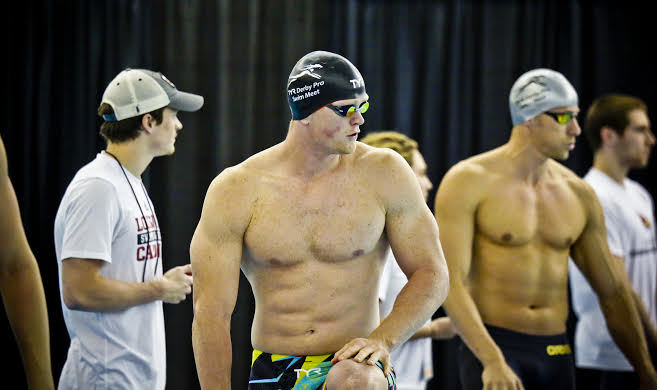 Most of his career, Josh Schneider has been known for two things: arguably the most imposing stature in professional swimming and his sheer top speed over a 50. But it's his 100 free range that stood out on Sunday in Indy. Archive photo via Chip Dumstorf, bisig.com

Canada’s male Olympic frontrunner Santo Condorelli will take on the 100 free this morning in Indy.

The Arena Pro Swim Series has wrapped up for the 2015-2016 season. Here are 5 Big Things from the final night of the Indianapolis stop:

Georgia Bulldog Jay Litherland has mostly been seen as a U.S. Olympic Team contender in the 400 IM. But tonight, he joined an exclusive club in the shorter IM race as well.

Litherland broke two minutes for the first time, winning in 1:59.93. That makes him just the 7th American to do so this season – joining Michael Phelps, Ryan Lochte, Chase Kalisz, Michael Weiss, David Nolan and Josh Prenot.

2. Erin Voss on the Rise

17-year-old Erin Voss is heating up at the right time, and has herself in line for a finals appearance or better at Olympic Trials.

Tonight, she beat Canadian Olympian Dominique Bouchard head-to-head for the 200 back title, and hit her second lifetime-best in the past month. Prior to this spring, Voss had been stuck at a lifetime-best of 2:10.58 from 2014. But she bettered that in Charlotte in May, then bested that time with a 2:10.12 tonight. She now sits #5 among Americans for this season.

Most of his career, Josh Schneider has been known for two things: arguably the most imposing stature in professional swimming and his sheer top speed over a 50.

But Schneider is extending his range in an attempt to make the U.S. Olympic 4×100 free relay team as the 50 has become more and more crowded with big names. Schneider has put up the 5 fastest 100 freestyles of his career over the past 10 months. That started on the World Cup in August, continued through Winter Nationals and kept right on rolling today, with Schneider going 49.19 in prelims.

Schneider quietly sits 3rd among Americans this season in the 100, behind only Olympic champ Nathan Adrian and NCAA sensation Caeleb Dressel.

While Schneider has been upping his distance, Connor Jaeger shortened up his 1500 free. The Club Wolverine Olympian appeared well off his in-season pace, winning in 15:28.34. But a closer look at the splits shows Jaeger went after the 800 free split, then cruised the rest of the way.

Jaeger was 7:51.02 to the 800, which is about 7 seconds off his lifetime-best. Maybe more impressive was that he took a 47-second 50 in relaxing right after that split and still managed to beat the entire field by two seconds or more.

A handful of swimmers are versatile enough to have the unenviable task of paring down their contending events into a manageable Olympic Trials schedule. Count Melanie Margalis among that group.

The Georgia alum is improving in several events that seemed more like dark horse candidates for her lineup a year ago. Her 1:57.3 in the 200 free earlier this weekend puts her in the conversation for a role on the Olympic 4×200 free relay, and both of her breaststrokes were lifetime-bests in Indy.

Sunday night she put up a season-best 2:11.25 in the 200 IM. She ranks #4 among Americans this season in that event, but may have to choose between the 200 IM and 200 free, as both fall on the same days of Olympic Trials.

Talking about the exclusive sub- 2:00 200IM club, It still amazes me that Michael Andrew went 1:59.86 last summer at age 16! I think he has amazing potential in that event, and I wish that he would focus on that in the coming year. I know he loves the short stuff, but I think he could be great in the IM. It helps so much to have a great breast stroke. Regardless, I wish him the best in Omaha!

I’m just not sure anyone going 1:59 really matters. We have 2 guys who are clearly the 2 best in the world in that event.

Cseh won’t be swimming IMs in Rio so you need to pimp Hagino if you’re looking to troll the Americans some more.