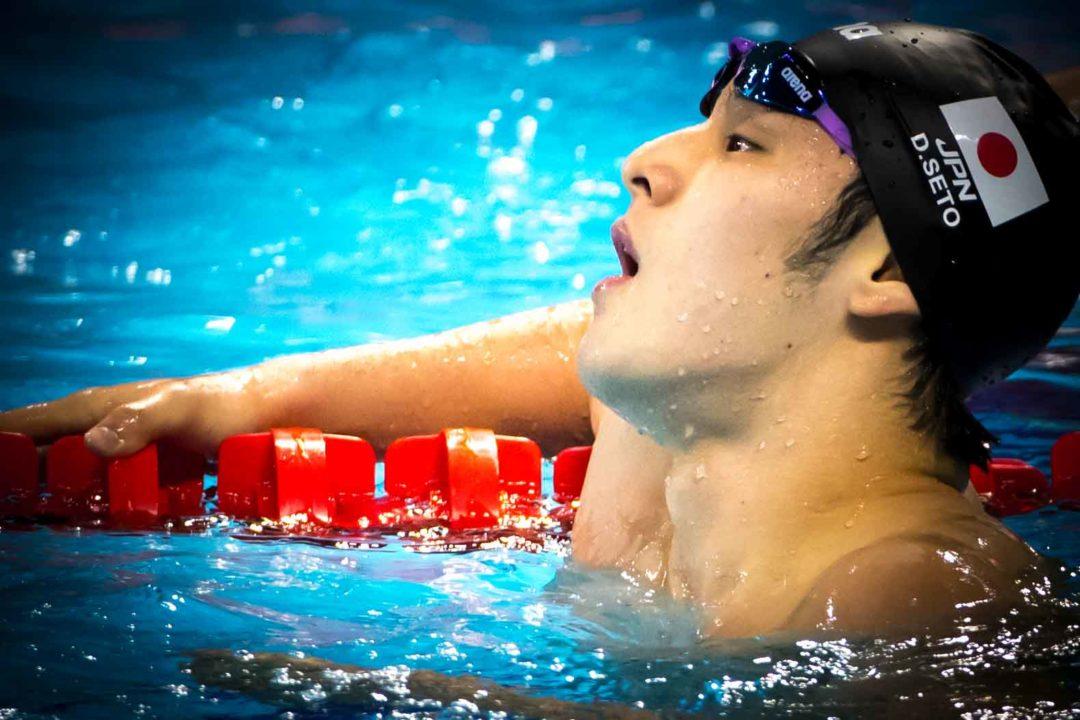 On-fire Daiya Seto will have extra incentive to give it his all at next month's Konami Open, seeing how a quarter of a million dollars is up for grabs. Archive photo via Mike Lewis/Ola Vista Photography

The 2020 Kosuke Kitajima Cup, which just concluded last weekend, represented the first of a trio of annual high-profile Japanese swimming meets bringing us into the height of the Olympic preparation season.

Along with the Kirara Cup, set for February 7th-9th and the Konami Open, slated for February 15th-16th, the three meets hold extra significance in this Olympic year, giving both veterans and rising swimming stars within Japan additional chances to fine-tune their racing craft before the all-important Japan Swim.

Set for April, the Japan Swim represents the nation’s Olympic Trials and the sole qualification opportunity for athletes to qualify for a home nation-hosted 2020 Summer Olympic Games. An exception to this is Daiya Seto, Japan’s first-ever double IM World Champion.

Olympic medalist Seto clocked a 400m IM winning effort of 4:08.95 and a 200m IM mark of 1:56.14 to top the podium twice last year in Gwangju. His gold medals automatically qualified the versatile star for both events for this year’s Olympic Games, per Japan’s Olympic selection policy.

To bring out the best in the racers competing next month, organizers of the 36th Konami Open have sweetened the pot big-time in terms of incentives, offering up a whopping 30 million yen prize to anyone who breaks a World Record at the meet. That equates to approximately $275,000 for anyone who fires off the fastest time ever in an event, across men’s or women’s races. (Nikkei)

Also up for grabs is a prize worth 5 million yen (approximately $50,000 USD) for any Japanese swimmer who produces a new national record at the meet.

Historically, the Konami Open has seen some stellar performances, including Katsumi Nakamura‘s still-on-the-books 100m free national record of 47.87 from the 2018 edition. At the last Olympic year competition, Rikako Ikee clocked a new World Junior Record of 24.74 at just 15 years of age.

Already this year, 18-year-old Shoma Sato rocked a big-time 2:07.58 200m breast swim to register an unofficial World Junior Record and sit under a second away from Ippei Watanabe‘s national record of 2:06.67 from 2017.

Ageless wonder Ryosuke Irie is also displaying impressive form, nailing a time of 52.59 last week to come within .35 of his own national record in the 100m back.

World Championships silver medalist Katsuhiro Matsumoto is also a name to mention for producing something special, clocking a winning time of 1:45.82 already this year in his signature event of the 200m freestyle.

Along with the Japnese national team, the nation’s World Junior Swimming Championships squad and Junior Elite squad have been invited to this 2-day affair.

With the aforementioned kind of money on the line, in addition to the increased adrenaline infused into Japanese swimmers longing to represent their country this summer on a home stage, anything can happen.

Seto is has a chance to win this money

The world records in Seto’s events are crazy. I think he could get close, but he hasn’t been within 2 seconds of the 4 IM, or 1 second of 2 IM.

agreed – those 2 WR’s are still tough to reach …..even for a Talent like Seto

Just swim like a man possessed in the 200 IM.

The bonus for national records is certainly achievable. Hagino’s marks for both medleys are on red alert and Seto himself just set the mark for 200 fly.

the 400 IM actually seems like the most likely. i think something involving the free being the worst stroke, it will take pure grit- fully assuming that, like most swimmers, he does indeed swim mostly freestyle during practice, making him at least very familiar with the stroke and able to change gears (unlike, say, butterfly, which generally is more difficult to nail if you aren’t a) talented enough or b) don’t practice enough) …so, the key will be to use his undeniable dominance in the first three strokes, and just bring it home as fast as possible. he does not have a weak stroke besides free (unlike Kalisz, who had two: back & free). i mean, there’s gotta be something… Read more »

I’ve long had suspicions of what kaliszs real 200 freestyle time is. His technique is awful but he closes his IMs just fine. Either he is secretly as 1:46 200 freestyler or he saves all his energy for the end to close. I would be very surprised since he has the worst free technique known to man.

The times are gonna be sicko mode