2022 World Junior Championships: Day 5 Swims You May Have Missed 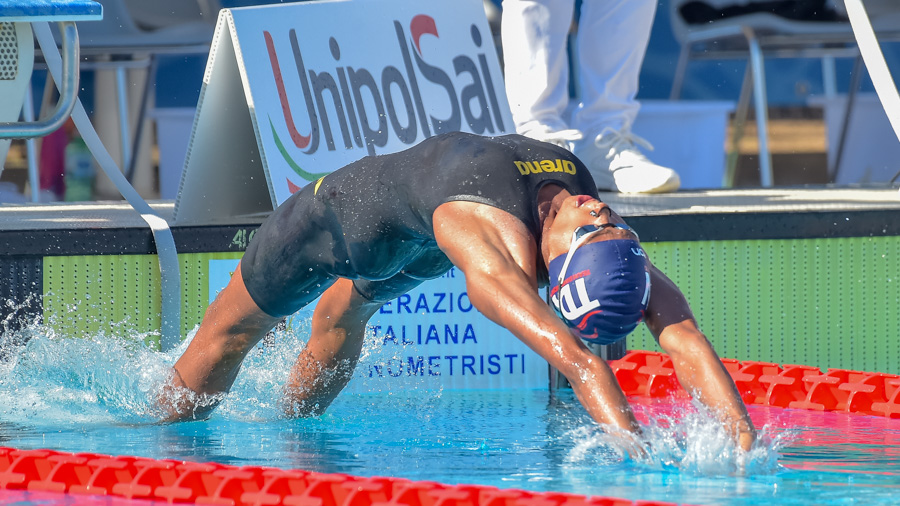 Sara Curtis (picutred) had to race both the 50 free semifinals and 50 back finals tonight, and she ended up finishing third in both events. Archive photo via deepbluemedia

Day five of the 2022 World Junior Championships was highlighted by some fast swims, including Diogo Ribiero’s world junior record in the 50 fly, Hungary’s win in the girls’ 4×100 free relay, and David Popovici‘s 48.17 100 free semifinals swim. In this article, we go over some of the performances from today’s sessions that flew under the radar.

Tonight, Italy’s Sara Curtis had to take on a tough double, swimming both the 50 free semi-finals and 50 back finals with only the boys’ 50 breast semi-finals separating the two events. However, she managed to do well in both of her races tonight. First, in the 50 free semi, she finished third in a time of 25.56, just 0.2 seconds off her best time of 25.36. Next, she took bronze in the 50 back finals, clocking a 28.93. Her personal record in that event remains at 28.79, a time she swum to take fifth in the finals at this year’s European Junior Championships.

In prelims, the quartet of Jimena Rodriguez, Sthefany Venegas, Karina Solera, and Genesis Bolandi broke the Costa Rican national record in the girls’ 4×100 free relay with a time of 3:02.80, qualifying for the finals of this relay for the first time in World Junior Championship history. Prior to today, the record time was a 4:06.57 from 2017.

While Costa Rica did not have any sub-1:00 splits in the finals like they did in prelims, Rodriguez and Venegas being substantially faster than their morning times played a big part in their record being re-broken.

In the men’s 100 free semi-final, David Popovici and Patrick-Sebastian Dinu placed first and fourth respectively to qualify for finals. Popovici’s 48.17 was over two seconds faster than the rest of the field and definitely was not an “under the radar” swim, but Dinu’s performance, plus the fact that two Romanians made a World Juniors finals, were.

Dinu went a best time of 50.23, improving upon the 50.45 he clocked at European Juniors. He has had some strong relay swims at this meet, including a 49.50 anchor leg in the boys’ 4×100 free relay, and now he’s living up to his potential individually. But most importantly, two Romanians in the 100 free final could be the spark for the country to get stronger internationally in the 4×100 free relay, which is significant considering that the country has only finaled once in a men’s relay at a senior international meet before.

After breaking it in semi-finals with a time of 24.46, Chilean swimmer Felipe Baffico clocked a 24.43 today to lower his men’s 50 fly Chilean record by 0.03 seconds and finish sixth in the finals. Prior to this meet, the record held by Oliver Elliot, who swum a 24.66 at the 2016 South American Championships.

Baffico has dropped over a second in the 50 fly atWorld Juniors, as he came in with a best time of 25.56.

Brazil’s Celine Bispo (57.43), Beatriz Bezerra (56.84), Sophie Coleta (58.35), and Rafaela Sumida (57.51) combined for a time of 3:50.13 in the girls’ 4×100 free relay, which earned themselves a bronze medal. That medal was actually South America’s first-ever relay medal in a girls’ relay at the World Juniors Championships, as in the past Brazil has finished top three in boys’ relays at this meet but never in a girls’ one. However, the team still is a long way to go from obtaining the overall South American record, which currently stands at 3:37.39.

As I have said before, it’s great to shine the light of accomplishment on these young athletes who otherwise might go unrecognized! Nice Job!