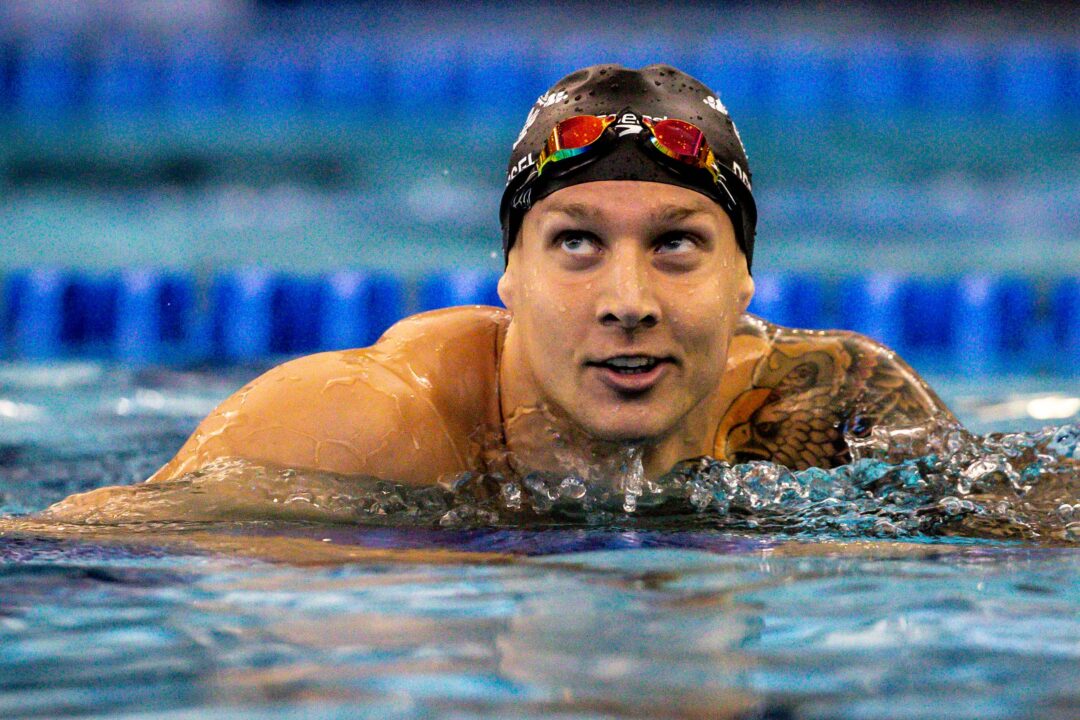 Without Kyle Chalmers in the field, Caeleb Dressel is the big favorite to three-peat in the 100 free. But the other spots on the podium are up for grabs. Archive photo via Jack Spitser/Spitser Photography

In our preview for U.S Trials, we wrote that behind Caeleb Dressel, the race for relay spots was up for grabs. It feels like that will also be the case at the World Championships, with Dressel being the clear favorite and the race behind him wide open.

At the 2019 World Championships and 2021 Olympics, Dressel had a pair of epic showdowns with Australian Kyle Chalmers, narrowly emerging victorious both times. This year Chalmers will only race the 100 fly individually at Worlds, and the field will also be missing the other member of the Tokyo Olympic podium, Russian Kliment Kolesnikov.

With those two missing, the race to get on the podium has a myriad of contenders, though we should acknowledge that Dressel is far from untouchable given the wealth of young talent in this race.

The Olympic final last year had the fastest qualification times in history, and we’re set for another close race where any number of contenders could step up.

Let’s not beat around the bush, Dressel is the favorite here. He’s the reigning Olympic and World champion, and his 46.96 lifetime best makes him the third-fastest performer of all-time, and the fastest ever in a textile suit. This season, his best is a 47.79 from U.S Trials. Dressel said in Greensboro that the 100 free is always his last event to “come around” during taper.

Olympic finalist Miressi is tied with Burras for the third-fastest time in the world this year in 47.88. Miressi is the Italian Record holder with his lifetime best of 47.45, while Burras blasted the 47.88 for a new PB at British Trials, becoming just the second Brit sub-48 in the event. He touched the wall one one-hundredths off of Duncan Scott’s National Record. Burras has burst onto the sprinting scene in a big way and is riding that momentum into Budapest.

Miroslaw’s 47.92 at the Berlin Open was also his first time under 48 seconds. Additionally, he became the first German under the threshold, asserting himself as the new National Record holder. Like Burras, he’s had a strong spring, improving in the 200 free as well. As long as he hasn’t shown his cards too early and can match or better his time, he could very well grab a lane in the final.

Miroslaw, 21, is coming off a successful freshman year at Indiana University that included winning the Big Ten title in the 200 free.

With Chalmers and Kolesnikov not racing in Budapest, the other Olympic finalists will be big medal threats. There, Maxime Grousset finished just off the podium in fourth. Of the finalists we have yet to mention, he holds the fastest time this season in a 48.03 which is about half a second off his lifetime best of 47.52.

Fifth place in Tokyo went to South Korean Hwang Sunwoo after he went 47.56 in the semifinals for a new lifetime best and Asian record. This season, his 48.42 is 12th-fastest among men racing in Budapest. He turned 19 on May 21st.

17-year-old David Popovici is often mentioned alongside Hwang as a rising teen phenom and is also one to watch for in Paris 2024. Popovici is the World Junior Record holder at 47.30, a time he clocked at last year’s European Junior Championships. He’s been 48.11 this season, setting himself up nicely to improve upon his seventh-place finish in Tokyo.

Nandor Nemeth rounds out the Olympic finalists competing at Worlds. His best is 47.81, though he was about a second slower than at the Hungarian National Championships (48.87). Watch for his closing speed–in the Olympic final, he had the second-fastest back half in the field (24.56).

BEST TIMES ALL AROUND

In addition to Burras and Miroslaw, a slew of other swimmers set new personal bests this season. The fastest of them is Brooks Curry, who clocked a 48.04 at U.S Trials. Curry had a breakout year in 2021, qualifying for his first Olympic team, and he hasn’t slowed down this season,  sweeping the sprints at NCAA Championships. Look for him to get under the 48-second barrier for the first time in Budapest.

Tom Dean will also be trying to break that barrier for the first time. At the British Trials, he finished second behind Burras in 48.06, making him a threat here along with being one of the favorites in the 200 free. Most recently, he won the 100 free at Mare Nostrum’s Canet stop and he’ll try to ride that momentum in a few weeks’ time. As a 200 specialist, the key for him will be to get out within striking distance of the field at the 50.

France’s Hadrien Salvan and Australia’s William Yang swam lifetime bests of 48.51 and 48.55, respectively this season. They’ll likely need to drop again to make the final, but if they hit their tapers, they could be in the mix to snag a lane.

In case you were worried that we’d run out of swimmers to talk about, never fear. There are still several names we haven’t mentioned yet that could be in contention for a spot in the Worlds final.

One such athlete is 19-year-old Canadian Joshua Liendo, who made his major international debut at the 2019 World Championships on Canada’s 400 free relay. Three years and an Olympics later, he’s back and competing in three individual races. In this one, he’s been 48.35 this season, about two-tenths off his best of 48.13.

At the Olympics, Liendo finished 14th in a time of 48.19, but since then, he’s asserted himself as someone who can step up in big moments, winning a pair of individual medals, including bronze in the 100 free, at Short Course Worlds in December.

Brazil’s Gabriel Santos won a thrilling race at the Brazil Trophy to qualify for this event in 48.64, having set a lifetime best of 47.98 from 2018. If he can get back down to that time, he might play spoiler to some of the other athletes looking for a lane at night.

Serbian Andrej Barna finished ninth in this event in Tokyo. Provided he’s in the field, the 24-year-old will likely be among those in the semis vying for a spot in the final eight. His best time sits at 47.94, done in the Olympic semis, and this season, the Louisville grad went 48.44 at the U.S. Open in December. Most recently he won the 100 free at Pro Swim Series stop in San Antonio in early April in 49.13, quicker than where he was at a similar point in the season last year.

Along with Chalmers and Kolesnikov, another notable absence from the field is Italian Thomas Ceccon, who led the Olympic prelims last year in 47.71 and then went on to finish 12th in the semis (48.05). The 21-year-old placed sixth at the Italian Championships, over a second off his PB in 48.79.

Dark Horse – Zac Incerti (AUS): Incerti finished behind Yang for second at Australia Trials in 48.65, just off his lifetime best 48.51. Like his countryman, he’ll need to drop if he wants to be in the conversation for a semifinals or finals swim. He did swim a lifetime best in the 200 free at Trials, so he could be due for a drop in his 100 as well. If that happens, he could find himself right in the thick of the fight for a spot in the final.

If Chalmers were here he would smash Dressel, Dressel is always hiding when Chalmers is healthy….

They curse him here, they curse him there;
Those Aussies curse him everywhere.
This isn’t heaven; it must be hell.
That damned American Dressel.

I want to add some rationality to the Popovici hypetrain-

To not extrapolate clear PB’s for him this season you have to assume either his training cycle has changed a lot or his drop from April to July last year is completely due to a freak growth spurt.

Any drop in his PB’s from last year would be a viable gold medal winning time this summer. Just as a side note, how likely is Dressel going to be at the level he was at in 2019/2021 after… Read more »

Perhaps Popivici does not taper well, and we all know when Dressel tapers bombs are dropped in the pool

real possibility sure… they picked him 2nd which sounds like a good guess to me! Surprised if anyone else wins… I’ll take Hwang 3rd and Liendo top 6

Although minus a few names, this one’s still extremely competitive and you’ll need to bring your A game to make finals.

Unless Dressel throws in an absolute shocker, or is having an incredibly bad meet, it’s hard to see him getting beaten.

Rest of podium looks open but am going with Popovici and Miressi.

Somehow I have the felling that Popovici will surprise us this summer. I do not see the dominance of Dressel here. ( at least not at Milak level)

I have Popovici as my favorite. He’s just sk scary to me. 47.3 at age 16 is absolutely freaking insane

Off topic but Duncan posted on IG that he’s got covid.

0
-13
Reply
Joel
Reply to  Thinning Out the Field

Why are you happy about it?