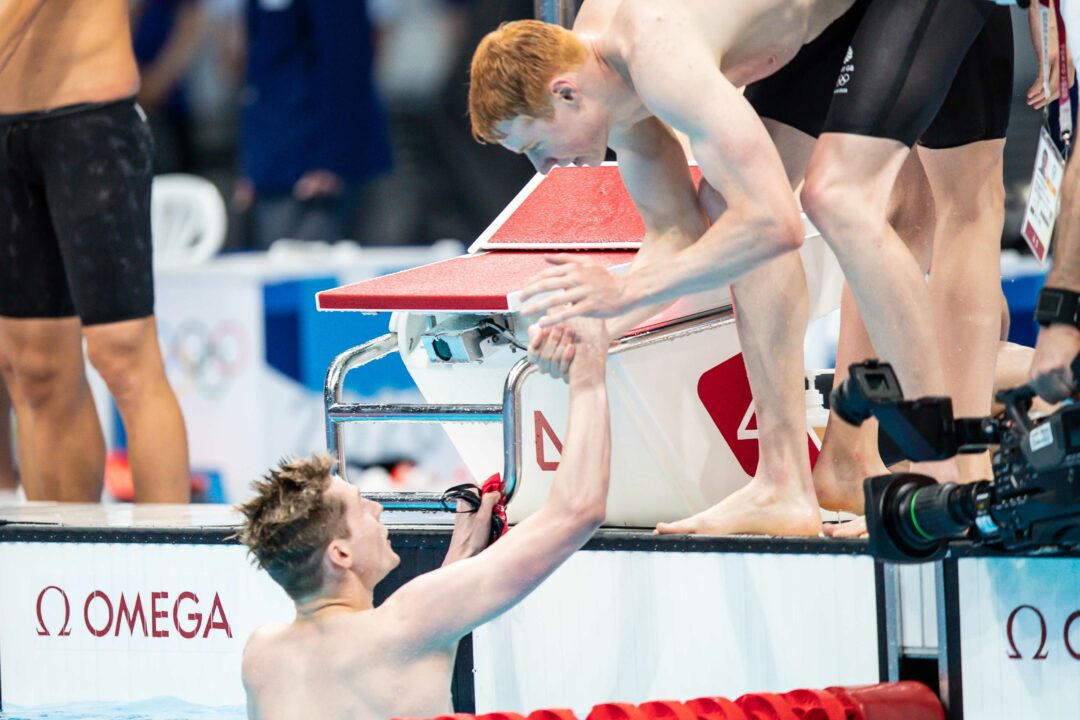 The story of our Olympic preview last year was that, after a lull in this event in the mid-2010s, there was a slew of 1:44s swum, with six swimmers heading into Tokyo having gone under the threshold at least once. Now, that number has crept up to eight. While none have cracked the 1:45 barrier yet this season, we could see a number of swimmers under that mark.

Even if the field isn’t as fast as they were in Tokyo, where it took 1:45.71 to final and 1:44.66 to medal, this is set to be one of Budapest’s most thrilling races. It features a stacked field where you could make a case for any of them getting their hand on the wall first.

Great Britain will field the electric duo of Tom Dean and Duncan Scott in Budapest, last year’s Olympic gold and silver medalists, respectively. In this tight field, they’re the men to beat.

Dean’s 1:44.22 from the Olympic final is the fastest textile time since Yannick Agnel’s 1:43.14 in 2012. His best this season is 1:45.73, where he finished second to Scott at British Trials (Dean was also pre-qualified in the event, so we know he has a lot more in the tank). Like many Brits, Dean has a big summer ahead with three major international competitions, but at the moment he says that his focus is solely on preparing for Worlds.

Scott clocked in at 1:45.54 to touch first at British Trials, a swim that came at the tail-end of a monster meet where he laid down some monster times in the individual medley events.

The 25-year-old’s best in the 200 free is the 1:44.26 that earned him the silver medal in Tokyo. In Budapest, he’ll be looking to flip the script and stand on top of the podium. Something to keep in mind is that the 200 free falls on Day 2 at Worlds, and Scott will have raced the 400 IM the day before. However, given that many in the field will have also raced on Day 1 in the 400 free, it’s less of an alarm bell than it is something to note.

There’s a trio of teenagers looking to show off what they learned from the Olympics.

Matt Sates, who recently turned pro after half a season in the NCAA, has been lighting up the Mare Nostrum Tour. In Barcelona, he beat Olympic champ Dean in a new best time and meet record of 1:45.91. Sates has said that he’s doing a slight taper for Worlds and will be all-in for Comm Games, so it will be interesting to see what form he brings to Budapest.

Hwang Sunwoo holds the World Junior Record of 1:44.62 from his prelims swim at the Olympics, a showing that also made him the 11th fastest performer of all time. This season, he was 1:45.79 at Korean Trials. As we saw at the Olympics, Hwang likes to go out fast, so look for him to take the race to the rest of the field. If he’s altered his race strategy, or if he’s able to hang on better down the last 50, will be the determining factor(s) in his chances at standing on the podium.

Romanian standout David Popovici swam a personal best 1:44.68 to place fourth in Tokyo, missing a medal by just two one-hundredths of a second. The now-17-year-old will look to strike back here for a medal at his first long course Worlds. This season, his best is a 1:46.28, but expect him to improve upon that.

Fernando Scheffer grabbed bronze in Tokyo in a best time of 1:44.66. The Brazilian and South American Record holder won the Brazil Trophy in 1:46.18, his best mark this season. Recently, he’s been on the Mare Nostrum circuit with other medal contenders.

Olympic finalist Kieran Smith holds the fastest time in the world this year with his 1:45.25 from U.S. Trials. While he was a part of an NCAA-winning relay, Smith’s individual events at NCAA Championships fell shy of expectations as he failed to win a national title after coming in as a big favorite to do so. However, if he had one eye on long course throughout the NCAA season, he could have something big in store at Worlds.

Lithuania’s Danas Rapsys rounds out the Olympic finalists also competing in Budapest. His best time is 1:44.38 from 2018, while his season-best in 2021-22 stands at 1:46.43. He’ll have to drop from that to make the final, but it wouldn’t be surprising at all to see him there given his track record. An extreme talent, Rapsys tends to be hit or miss at various major championships.

Drew Kibler swam 1:45.32 at U.S. Trials to become the second American representative in this event. That swim is also a personal best and the second-fastest in the world this season. Kibler went best times in multiple events in Greensboro, cementing his status as a rangy freestyler who’s a threat from the 50 to the 400. The 200 free is the middle ground for him and the question is: does he have another drop in him?

Katsuhiro Matsumoto will be back to defend–and try to improve on–his silver medal from the 2019 World Championships. The 25-year-old’s best time is 1:44.65 from last year’s Japanese National Championships. His season-best is a 1:46.14, and he was just off that last week at the Barcelona stop of Mare Nostrum.

The Australian duo of Zac Incerti and Elijah Winnington will look to break into the top eight after Australia was shut out of the Olympic final. Incerti went a lifetime best 1:45.80 at Australian Trials. Winnington was right behind in 1:46.01, though his best is 1:45.55. It’s a tight field, but don’t be surprised if either one finds a lane in the final.

China has not released an official World Championship roster, though one did leak through Chinese media. Ji Xinjie was on the leaked roster and if he is in Budapest, look for him to be in the mix as well. He’s been 1:46.48 this season, and his best is 1:45.48.

Dark Horse – Rafael Miroslaw (Germany): Märtens’ countryman also had a strong spring, becoming the first German to break 48 seconds in the 100 free. At the same meet, he also won the 200 in a personal best 1:46.04. While he’ll likely need to drop from that to make the final, it certainly isn’t out of the realm of possibility that he does just that.

I feel like one of the teenagers will take it tbh.

Would definitely have included Matt Sates in the top 8, if not the top 3!

Into the final yes but I don’t think top 3 this year. 2 free has gotten very deep and tight now.

Even though it’s not his focus meet?

you’re dreaming if you think he was serious…

Historically there were a lot of surprising medalists in this event:
Chad le Clos Rio 2016. Krasnykh Budapest 2017. Scheffer Tokyo 2020ne.
All of them were not among top 10 or even top 20 in the world leading into the big game, but ended up dropping huge PRs and getting onto the podium.

Best candidate for this criteria this time around would be… Incerti?

But Incerti is currently 8th this season. Would love to see him medal though.

I like Sunwoo here. Loads of talent, young and improving, and he’s not afraid to go for it, which is what will have to be done to chase Agnel into the 1:43s. If he can hold his motorboat kick through the last 50, watch out.

Hwang has been training under coach Ian Pope in Australia. It is said Hwang already made a remarkable progress and is in a very good form now. ..surely expecting better than 7th.
He ambitiously aims for the top of the podium at Worlds.

If Hwang were an American, Swimswam would have pencilled in as a medalist.

Townley Haas will come back from the dead knock Kibler off his starting blocks and swim a 1:43 flat