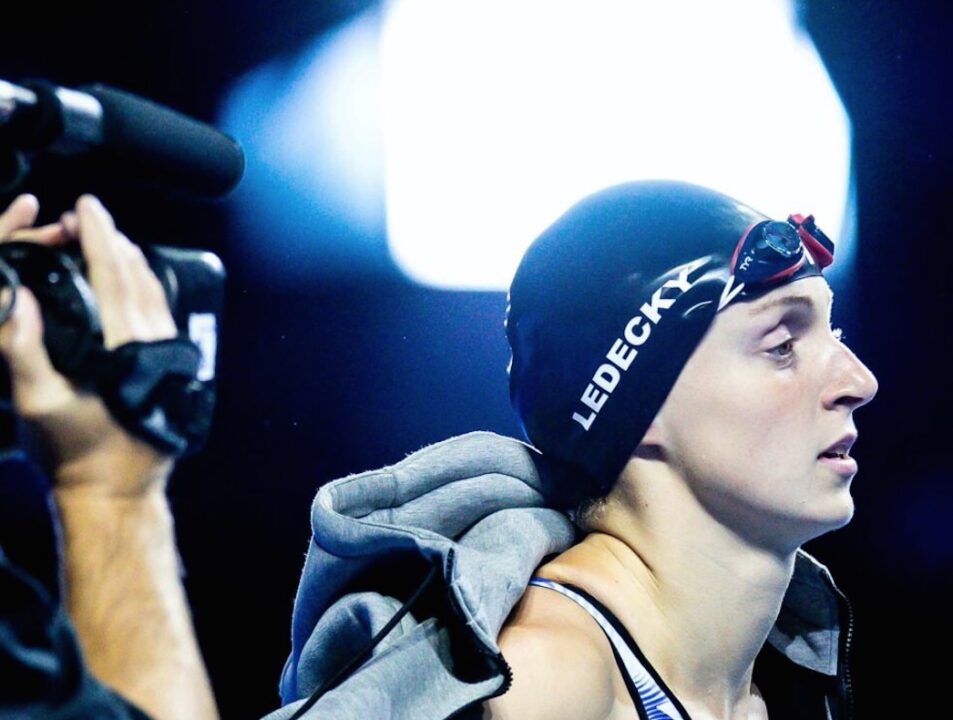 Katie Ledecky is the clear favorite heading into the women's 400 free final, but can she get her world record back on Day 1 of finals at 2022 Worlds? Archive photo via Jack Spitser/Spitser Photography

The first swimming finals session of the 2022 World Championships is here. It’s a packed session, with five finals and four semifinals.

We got a preview of what finals could look like in Heat 4 of prelims, which featured half of the 2020 Olympic final. Elijah Winnington was under world record pace for the first 200 meters, with Kieran Smith going with him. But it was Felix Auboeck who touched first, using a strong back-half to power past them and touch in 3:43.83. That’s a new personal best and Austrian Record for Auboeck, and would have medaled last summer.

Guilherme Costa qualified third, setting a new South American record of 3:44.52. After posting 3:41.60 this spring to become the eighth-fastest performer all-time, Lukas Märtens clocked 3:45.04 in the heats to quietly advance fifth. Was he saving something for tonight, or did he peak in the spring? Either way, we’re set for a tight race for our first final in Budapest, where the winner could come from any lane.

Unlike the men’s 400 free, where the gold medal is up for grabs, Katie Ledecky looks to have this race locked down. She looked in control this morning, posting 3:59.79 for the only sub-4:00 time in prelims. There’s an interesting battle brewing behind her for the minor medals though, as Summer McIntosh, Lani Pallister, and Kiah Melverton are all within half a second of each other. In finals, Leah Smith will surely be in the fray with them as well.

Make sure to keep your eye on the clock here. Ledecky will be hungry to reclaim her world record after Ariarne Titmus broke it at the Australian Trials. Behind her, the race is on to get under 4:00, and all four of the women in the medal hunt are capable of getting close to the barrier. The question is, can any of them get under?

French sensation Leon Marchand is the top seed here, after breaking his own French record in 4:09.09. Marchand seemed to be on cruise control for the freestyle leg, so we could see him get under that time in the final. He’ll be pushed by Daiya Seto, who’s rebounded well after missing this final in Tokyo. He won’t be satisfied with just getting back to the final though, he’ll want a medal, and he’s shown that he’s capable of getting there.

The American duo of Carson Foster and Chase Kalisz qualified second and third. Here, we’re witnessing a changing of the guard play out before our eyes, as Foster looks to take over as the top American in an event that Kalisz has dominated for a long time, though appears to be less focused on now. Foster posted 4:09.60, and as always, the question with him is how much does he have left in the tank for finals?

Even without Caeleb Dressel, the U.S men still finished a second clear of the field in the prelims to solidify their place as favorites. We saw some ridiculously fast splits out of the heats across the board though, and the race for the medals just got a lot tighter as Hungary put together an awesome prelims performance to assert themselves as a threat.

Australia elected to use Kyle Chalmers this morning, and he blasted 47.11 to help the Aussies qualify in second. That swim answers a lot of questions about his freestyle form, and if he can duplicate that swim, the Aussies have a strong chance at medaling in a relay many counted them out of. Aside from the U.S., not many teams have many options for swapping swimmers out, so many nations will likely field the same team for finals. One of the countries in this position is Italy, the Olympic silver medalists, who qualified in a lackluster sixth position. We’ll have to wait and see if they were keeping their cards close to their chests and have a big swim in store for finals.

We’re back on world record watch here, as the Australian women look capable of rattling their record from Tokyo. They’re missing some of their biggest sprint stars, so this seemed unlikely before the morning, but they were under the pace through the first two legs. They still have Mollie O’Callaghan and Shayna Jack to swap in, too.

Penny Oleksiak will likely draw in for Canada tonight to boost their squad, and there’s a tough decision to be made for who makes the U.S’s finals team. Those two teams look like they’ll be locked in a battle for second, with Great Britain and China looking to get in on the action. In Tokyo, the Canadian women out-touched the U.S for silver, so get set for another tough race tonight as the U.S looks to even the score.

Marchand can match Chase K. in the breaststroke, so Chase can’t hang back too much.

China treating this legit, Zhang Yufei lead off and Yang also swimming, could easily sneak a medal from USA/Canada.

How long until the first final

USA not using Kibler and Aus not using Incerti in Finals of the 400 FR relay, both probably got Covid then unfortunately.