Women’s 4×100 FR Prelims: Will Douglass, Hinds, or Comerford Be Kept For Finals? 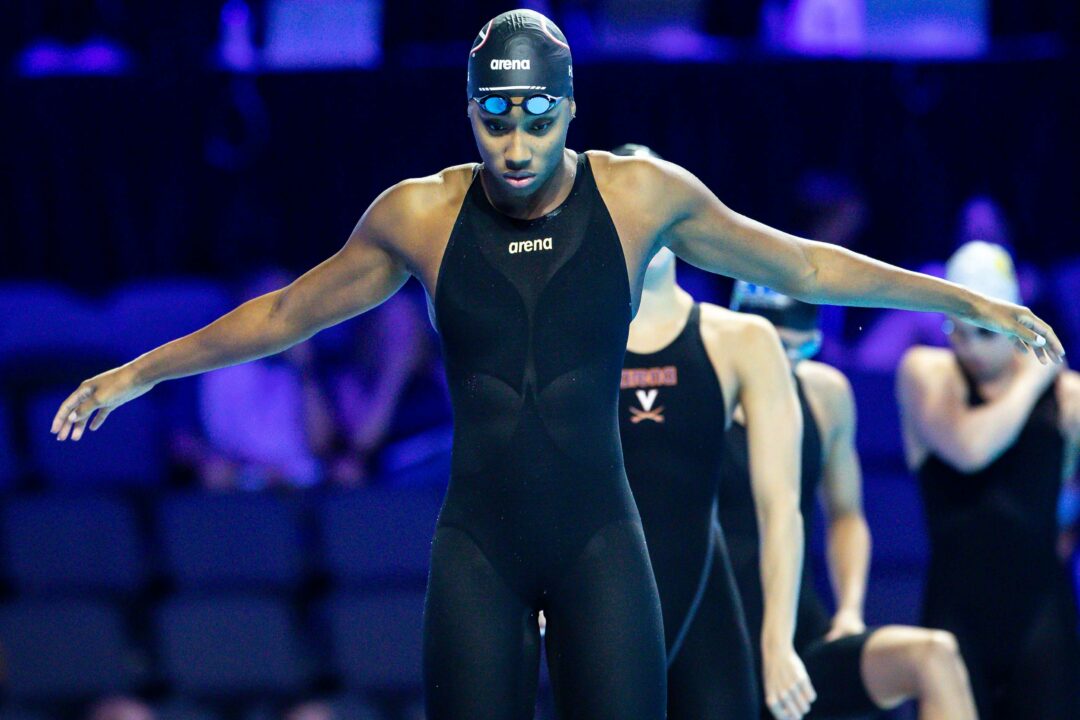 The biggest questions headed into the women's 4x100 FR are who the USA will keep from prelims, and whether the Aussies have a shot at the world record. Archive photo via Jack Spitser/Spitser Photography

The results of the prelims for the women’s 4×100 free relay were pretty much expected, with Australia dominating the rest of their competition and the United States and Canada following suit behind them. But with every relay comes discussion about splits and finals lineup decisions, which is what we are going to delve into.

Obviously, the Aussie women had two of the fastest splits in the field, with Madi Wilson leading off in 52.99 and Madi Wilson going 52.98. The only other sub-53 split came from the Netherlands’ Marrit Steenbergen, who proved that Dutch sprinting was not dead after all even without the likes of Femke Heemskerk and Ranomi Kromowidjojo.

Out of the Americans, Erika Brown was the leader of the pack with a 53.29 split, so she will most likely be kept for finals. In Tokyo, she was a mixed bag, leading off the 4×100 free relay in 54.02 but then anchoring the 4×100 medley prelims in 52.83. Likely, she won’t be leading off for the Americans based on her past performances, as she’s usually more successful off a rolling start.

Two out of the next three women on this prelims relay will have to be replaced by Torri Huske and Claire Curzan in finals. Although Natalie Hinds and Mallory Comerford had faster splits that Kate Douglass, their times are pretty much similar if you consider that Douglass’s was done off a flat start with a 0.67 reaction time. Even then, Hinds and Comerford have more experience than Douglass on these types of relays and faster best times, so I’d still give them the edge.

Now, the Hinds vs. Comerford decision. Comerford has a higher ceiling with a 52.59 best time, but that was done several years ago. Hinds has been more successful recently, having gone 53.65 at U.S. trials compared to Comerford’s 54.09. That being said, I think it’s wisest for the U.S. to go Huske, Curzan, Hinds, Brown (not in that order), but ultimately the final decision is up to the U.S. coaches.

It seemed impossible before today that the Aussies could challenge their World record from last year even without Cate Campbell and Emma McKeon.  However, from what we’ve seen today, there is a chance they could come very close in finals.

If you add up the best times of Wilson, Harris, Mollie O’Callaghan, and Shayna Jack, you get 3:30.72, which is still over a second off their World record of 3:29.69. If Harris and Wilson hit their PBs, while O’Callaghan and Jack dip into the 51-point range, they could shave a lot off of that aggregate time. And while I don’t think it’s very likely that a world record will happen again, it is certainly possible.

The best thing that Canada can take from this relay is Taylor Ruck‘s 53.49 split. After being left off finals entirely at the Olympics, it seems that she is back on form and ready to ascend as one of Canada’s top sprinters once more.

The latter two swimmers on this relay, Rebecca Smith and Katerine Savard, will likely be replaced by Penny Oleksiak and Maggie MacNeil. The question headed into finals is whether MacNeil will be impacted by her recent elbow injury, which is part of the reason why she’s only swimming relays at this meet. She split 53.47 on the Tokyo relay, so she could be of large help to Canada if she’s healthy. But if she isn’t, this could be a whole different story.

Strong splits by Anna Hopkin and Freya Anderson put the Brits in fourth place position headed into finals. Abbie Wood was rested for finals, and although her flat start best time isn’t fast, she’s been as fast as 53.23 on a relay start and will boost this team by replacing either Lucy Hope or Medi Harris.

In her senior international debut, Harris split 54.92, the slowest relay start on her team. Hope went 55.12 on a flat start but has been as fast as 54.37 leading off, so Harris will likely be the candidate that gets swapped out in finals.

The fate of China on this relay really depends on how seriously they take it. Last year, they didn’t enter a full strength team, leaving their best 100 freestylers (Zhang Yufei and Yang Junxuan) out. If they decide to go all in, Zhang and Yang (who anchored the mixed medley relay in Tokyo with a 52.71)  combined with a 53-mid form Zhu could make China a team to look out for. However, if they don’t put in their best swimmers, the chances of them doing anything significant in finals are bleak.

I would call Natalie Coughlin and Dana Vollmer back…

Can see both CAN & USA getting down to 3.33, quite possibly into 3.32s but it’s realistically going to need 3.31 at the very slowest to win.

Think talk of AUS breaking their own WR is rather optimistic; given that WR included a 51.35 split and with every due respect I don’t think any in this particular squad are currently at that level …. just maybe, someone could sneak just under 52sec. Am thinking 3.30 mid is likely ball-park. At CG IF McKeon actually has some decent form then you may see the WR threatened.

Didn’t Mal swim a boatload of relays at SC worlds in like 2018?

You’re right I thought I was onto something :/

If Aussies can’t pull away after the 2nd or 3rd swimmers, Canadian might pull an upset:)

don’t forget about Ledecky as an option! Especially if she has a great 400 swim.

Because the three swimmers in question did not show any indication of throwing down a 52 split, I think you give Ledecky the opportunity. Even if she’s only 53 mid, that’s better than the 53.8s we saw from Hinds and Comerford.

I agree. Ledecky’s ceiling is much higher in my opinion.

Agree – Katie appears to be in great form & they’ve got nothing to lose.

Ledecky isn’t 16 anymore. Asking her to drop a 53 low split after 2 sub 4 minute 400s, and with all the racing she has left in front of her is silly and unrealistic. There’s a reason she’s dropped the 200 from her program.