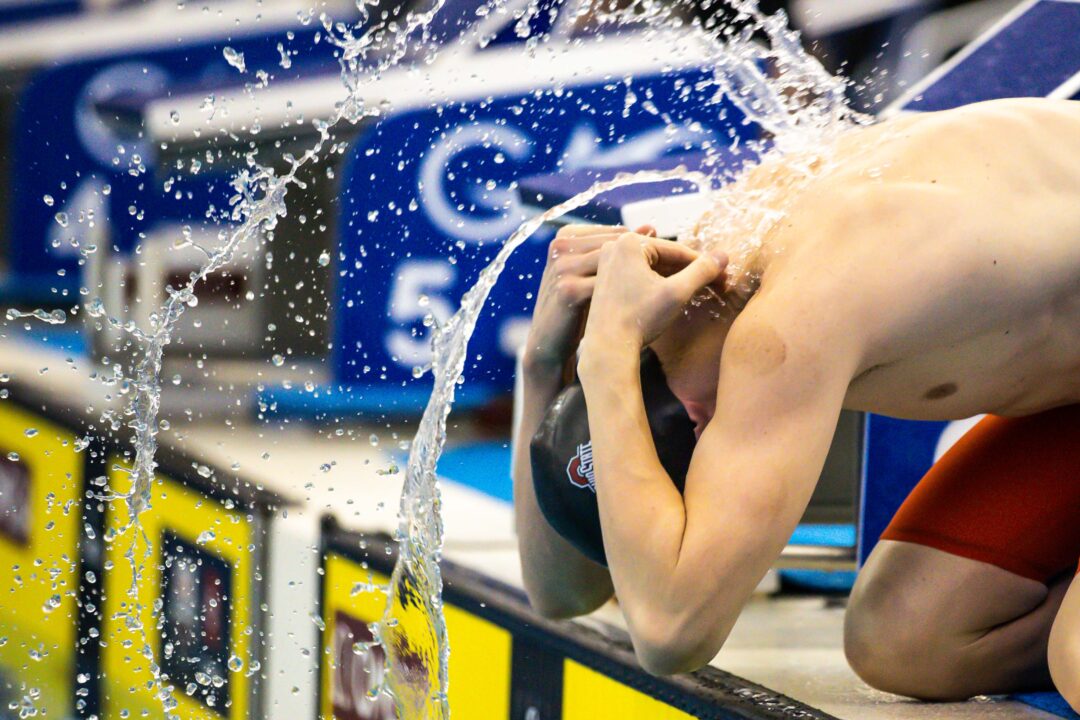 Charlie Clark blasted a 15:06.92 1500 freestyle just a few weeks ago to become the second-fastest American this season and nearly hit the FINA 'A' cut. Current photo via Jack Spitser/Spitser Photography

Bobby Finke swam nearly 30 seconds slower than his best time in the 1500 freestyle in December of 2021 and he’s still the fastest man in the country this season. He delivered a 15:04.77 at the US Open, which is slower than his Olympic gold medal-winning time of 14:39.65 from Tokyo.

Finke blasted onto the international scene last year when he collected gold in both the 800 and 1500 freestyles at the Olympics. Finke, known for his impressive closing speed, ran down the field in the 1500 to become the second-fastest American man in history behind Connor Jaeger‘s 14:39.48 from Rio 2016.

As the overwhelming favorite to win the 1500 freestyle in Greensboro, the more interesting question is just how fast will he swim at Trials? Will he stay conservative and just put up the time he needs to win? Will he get down into the 14:40-low range? Can he blast a new PB and break the American record?

The real race in the 1500 free will be the race for second. The FINA A sits at a 15:04.64 for this summer and no man other than Finke has cracked that mark yet this season.

Clark finished 5th overall at Trials in 2021 with a 15:14.11 but unleashed a huge PB of 15:04.37 later than summer at Summer Championships. While that swim wouldn’t have been fast enough to get a spot on the team, it would have been 3rd at Trials and is under the current FINA A. Charlie Clark is certainly in the running for this team and if he can pop in Greensboro he’ll be looking at a spot on his first-ever major international squad.

Gallant holds a 1500 long course best time of 15:11.79, while Dant’s PB is a 15:22.06. Both of their swims at NCAAs, however, were new best times in the yards event so a time improvement might be in order for one or both of them this month in the long course.

A question mark on our radar is Olympic Trials finalist Arik Katz who was 4th at Trials, having posted a time of 15:11.34.

David Johnston was a finalist at Olympic Trials last year and placed 7th overall in a 15:18.61, which isn’t fast enough to nab a spot on the team. His best time came a few weeks after Trials when he swam a 15:16.07.

This season, however, Johnston has seen improvements in his 1650 freestyle abilities. After hitting a 14:45.84 at Big 12s, he shaved 8 seconds off his former PB in the event with a 14:32.40 at American Short Course Championships. If he can translate that time improvement into the long course pool he could be looking at his first-ever sub-15:10 swim.

Rounding out the conversation is 18-year-old Alec Enyeart who is actually the third-fastest man in the country this season. He swam a 15:19.17 at the Wesmont Pro Swim Series, which was his first time under 15:20. It’ll take a bigger time-drop for him to fight for a spot on this team but the Texas commit will be one to watch moving forward.

Getting Clark on the team would be a huge boon for OSU. Getting two swimmers in the same discipline on an international team is nice, but to have two in two radically different areas in less than a year will be able to draw in a wider range of high caliber recruits.

What a great guy, very wholesome and caring

Was just going to say that. Kid’s crazy.