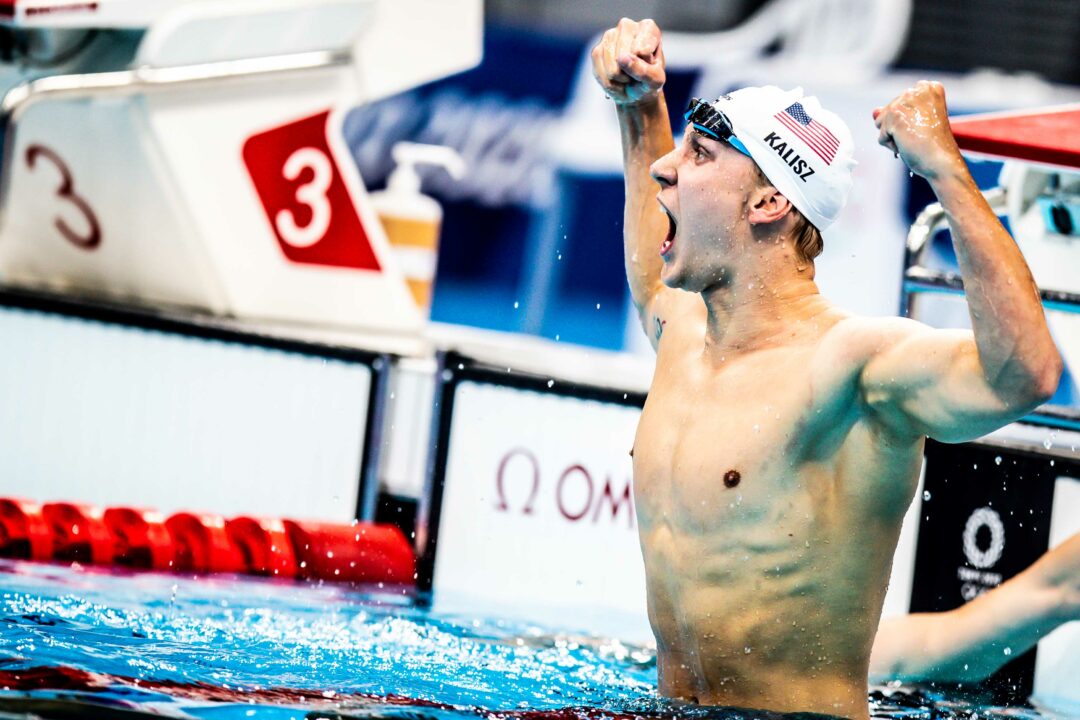 Veteran Chase Kalisz will fight to hold off up-and-comers Carson Foster and Shaine Casas, who have risen greatly in the world rankings in the last two years. Current photo via Jack Spitser/Spitser Photography

Michael Andrew, the 2021 U.S. Olympic Trials champion in the men’s 200 IM and Olympic finalist in the event, is uncertain he will swim the event at the 2022 U.S. International Team Trials. Without Andrew, 2017 World Champion in both the 200 and 400 IM, Chase Kalisz, would seem to be the favorite, but rising talent out of Texas could see the Bulldog dethroned. With or without Andrew, this will be a packed race. If Andrew chooses to swim the 200 IM and go after a spot on the team, we would count him in for either 1st or 2nd, earning an individual spot. However, the 200 IM and 50 freestyle will fall on the same day in Greensboro, and Andrew has said he is more focused on the 100 breast, 100 fly, and 50 free/fly/breast in 2022. With that knowledge in mind, we will not include MA in this preview. Without further ado, let’s get into it.

Chase Kalisz has been Team USA’s most reliable IM’er on the men’s side since the Phelps-Lochte era.

Kalisz is better at the 400 IM, though he has 2 long course World Championship medals to his name in the 200–a bronze from 2019 and a gold from 2017. Though Kalisz did not advance beyond the semifinals of the race at the Tokyo Olympics, he won gold in the 400 IM at the beginning of the meet. On top of that, he is the 2016 Olympic silver medalist in the 400 IM. Kalisz has more experience on the world stage than anyone else we should expect to see in this final in Greensboro. Though experience doesn’t always win the day, Kalisz is reliable and knows how to get the job done. His lifetime best of 1:55.40 from the 2018 Pan Pacific Championships is also the fastest in the field by a wide margin, sans Andrew.

Carson Foster has been on the cusp of making a major international team for several years now. In December of 2021, Foster represented the United States at the FINA Short Course World Championships, picking up a silver in the 200 IM and a bronze in the 400 IM. Foster also had an incredible NCAA season, placing 2nd in the 400 IM and recording a time of 3:33.79 in prelims, which currently makes him the 3rd-fastest ever in the yards version of the race. Foster finished 6th in the 200 IM, though Team USA’s best 200 IM’ers in long course have also tended to be its best 400 IM’ers in short course–Phelps, Lochte, Clary, Kalisz, and DeVine are some of the best examples of this. Foster has paid his dues and 2022 seems like the perfect time for him to make his mark on the world stage.

Unlike many others on this list, Shaine Casas did not recently taper for the NCAA Championships. Last fall, Casas turned pro and moved to the University of Texas at Austin, joining one of the most elite training groups in the world. Casas represented Team USA at the 2021 FINA Short Course World Championships, winning gold in the 100 backstroke, silver in the 200 backstroke, as well as 4 relay medals, including 2 golds. Casas is currently ranked 3rd in the world in the 200 IM after posting a speedy 1:56.70 at the Pro Swim Series in San Antonio. This also makes him the fastest American man in 2022 by 0.40 over Kalisz who is ranked 6th in the world with a 1:57.10, also from San Antonio.

Sophomores Destin Lasco from Cal and Luca Urlando from Georgia had huge NCAA seasons. In the 200 IM in particular, Lasco moved way up the all-time standings to 4th with a 1:38.21, placing 2nd, while Urlando placed 3rd with a 1:39.22, making him the 6th-fastest all-time in the small pool. In long course, neither Lasco nor Urlando has been that impressive yet, but this could be the meet where they make an impression and put up world-class times.

Olympic medalist Kieran Smith is better known as a freestyler, though he is one of the most versatile swimmers in the United States today. Smith is the 2021 U.S. Olympic Trials champion in the 200 and 400 freestyle, as well as the 3rd-place finisher in the 200 IM, clocking a 1:57.23, just o.26 behind Kalisz. Smith swam both the 200 and 400 IMs at the 2021 Short Course World Championships, making the final in each event though missing the podium both times. Even so, Smith is the 2022 SEC Champion in the 400 IM and should definitely be in the mix for a lane in the final, if not a spot on the team, in the 200 IM.

Trenton Julian from Cal and Jake Foster of Texas are two more NCAA swimmers to watch out for in Greensboro. Julian is a butterfly specialist who also has an extremely strong freestyle, while Foster is an IM specialist with a great breaststroke. Julian is known for blasting the front half of his races, so expect him to be out fast–he is almost certain to have the fastest butterfly split in the field. Foster, like Kalisz, will make his move on the breaststroke.

Finally, Arizona State’s Grant House had a great NCAA season and barely missed out on a spot in the 2021 U.S. Olympic Trials final, placing 9th in the semifinals. House placed 10th at the NCAA Championships in the 200 IM, and is one of the best freestylers in the nation, placing 2nd in the 200 free at NCAAs.

Other Pros to Watch

Jay Litherland, the 202 Olympic silver medalist in the 400 IM, and Abrahm DeVine, the 2017 & 2018 U.S. Nationals runner-up in the 200 IM, are two more pros to keep an eye on in Greensboro. Litherland is a 2-time Olympian and has represented Team USA at long course worlds on two other occasions. DeVine has not been to the Olympics but is the 6th-fastest American performer all-time in the 200 LCM IM.

Though DeVine has no medals from long course worlds, he placed 10th in the 200 IM in his first world championships in 2018, then moved up to 5th at the Pan Pacific Championships in 2018, and most recently placed 8th at worlds in 2019. Litherland, meanwhile, placed 9th at Pan Pacs in 2018 in the 200 IM. DeVine was disqualified in the semifinals of the 200 IM at the 2021 U.S. Olympic Trials, so his campaign in 2022 will be especially intriguing.

Circling back to what we said earlier about the 400 SCY IM converting into a great 200 LCM IM, DeVine is ranked 5th all-time in the 400-yard IM, while Litherland is ranked 25th all-time.

200 IM World Record holder Ryan Lochte has not officially retired from swimming, but he’s been pretty dormant lately. With no recent results and no more than a celebrity appearance at a swim meet in Florida, it’s difficult to predict how Lochte will perform if he chooses to race in Greensboro. Lochte was unable to make the U.S. Olympic Team in 2021, placing 7th in the 200 IM with a 1:59.67. Lochte is 37-years-old and a father of 2 young children. As fans, we’d love to see Lochte duke it out with the younger generation again, like he did in Omaha last summer, though his odds of making the team, let alone competing, are slim.

What about Sam Stewart?? He really should have been in the top 8 contenders. Duh

Andrew will swim it. Fastest American in the event since Phelps and Lochte and realistically the only event he has a chance to win individual gold in at worlds

Advantage Casas and Kalisz, both focused on long course and no taper 30 days ago.
Looks like it’s not this year again that we’ll see the best of Lasco in long course. 🙁

Both of them looked pretty sharp for no rest,etc don’t you think?

one of the best comments in swimswam history. just shuts down any arguments hahahaha

I don’t think there’s a conflict in his schedule

I bet he swims it

According to a SwimmingWorldMag article a couple days ago, he said he was swimming it.

According to a swm world mag article a couple days ago, he said he was swimming it

Will Khosla be at the meet? No conflicting finals for him?

He is a senior. Seniors don’t care (so much) about their grades in their final semester lolol