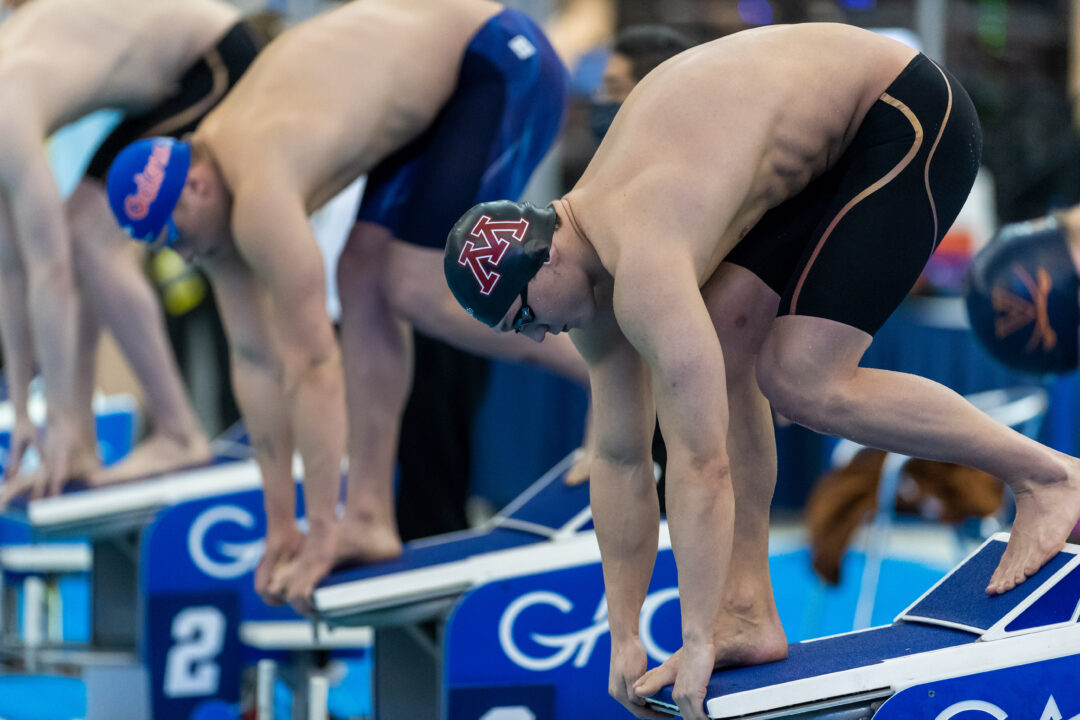 Minnesota superstar Max McHugh won both breaststroke events at last year’s NCAA Championships. Now a senior, McHugh will be looking to repeat. Here are the results from the A final at the 2021 NCAA Championships:

All but Keefer Barnum return this year, making this one of the deepest events in the meet.

As a way of highlighting just how fast breaststroke has gotten in the NCAA, we have 3 swimmers in the field this year seeded with 1:49s. Contrast that with last year, where it took a 1:51.20 for 3rd place. Max McHugh leads the psych sheet with his season best of 1:49.45. That time came at the Big Ten Championships and is the 3rd-fastest performance of McHugh’s career. His personal best of 1:49.02 was set en route to winning the NCAA title last year.

While we can expect the senior duo to give us a great race, Penn freshman Matt Fallon is looking to disrupt things. Fallon has exploded in his first season with the Quakers, blasting a huge new personal best of 1:49.71 at eh Zippy Invite in November. Fallon was only 1:51.44 at the Ivy League Championships, although since he had the A cut and Penn was highly unlikely to qualify any relays, Fallon may have been targeting NCAAs the whole time.

Behind the trio of 1:49s, there are 3 Pac-12 swimmers who each have a great shot at making the A final. First up, Arizona State freshman Leon Marchand, the Pac-12 Champion from a few weeks ago. Marchand had a phenomenal conference meet, capping off his individual racing with a huge personal best of 1:50.39 to win the 200 breast. We’ve had questions about Arizona State’s ability to maneuver the double taper necessary for Pac-12s and NCAAs, but Marchand has plenty of high-level meet experience from his international background. It seems likely he’ll be able to match his Pac-12s performances.

Cal’s Hugo Gonzalez is next up. Gonzalez finished 3rd int he event last year with a 1:51.20 and swam a personal best of 1:50.57 a few weeks ago at Pac-12s. Although he’s primarily focused on backstroke on the international stage, even finishing 6th in the 100 back at the Tokyo Olympics last summer, Gonzalez has excelled in SCY breaststroke. Gonzalez has a narrative about him that he doesn’t show up for NCAAs, largely due to his freshman season at Auburn, where he was incredible at SECs and not nearly as fast at NCAAs. That’s not really the case, however. Last year was only Gonzalez’s 2nd NCAA Championships, and he swam quite well, finishing 2nd in the 200 IM and 3rd in the 200 breast. He did have a hiccup in prelims of the 400 IM, but he also anchored the 400 free relay to victory as well.

Stanford’s Daniel Roy, another senior, was the 5th place finisher last year with a 1:51.82. Roy has already been significantly faster than that time this season, entering as the #8 seed with a 1:51.21. His personal best of 1:51.07 was set at the 2021 Pac-12 Champs. Roy has performed well at NCAAs throughout his career, taking 5th in the event last year and 12th in 2019, when he was a freshman.

Other Returning 2021 A Finalists

Caspar Corbeau, a Texas junior, finished 4th in the event at last year’s NCAAs, swimming a 1:51.43. Corbeau has had an excellent season to this point, swimming career bests in both the 100 and 200 breast. He’s gotten down to 1:50.81 in the 200, which makes him the #7 seed. Last year, Corbeau had great performances in the 200 breast at NCAAs, dropping from his seed in prelims, then again in finals. Since he’s already dropped a fairly significant amount of time in the event this year, he may not drop as much from seed this year, but either way, Corbeau is set up very well heading into the meet.

We had a big internal debate on where to project Corbeau from this meet, with staff wanting him everywhere from 1st-7th.

Virginia Tech sophomore Carles Coll Marti took 6th at last year’s NCAAs, posting a 1:51.84. Like Corbeau, Coll Marti has swum a career best this season, getting down to 1:51.69, which makes him the #11 seed. Coll Marti had a huge drop from ACCs to NCAAs last year, and if he is able to match his seed time this year, he’ll be in the A final.

Our final returning A finalist is Georgia Tech’s Caio Pumputis, the 8th place finisher last year. Pumputis swam a 1:52.27 for 8th last year and has been 1:52.19 this season. Pumputis has a history of swimming well at NCAAs. At the 2019 Championships, he was a 3x A finalist, and last year (2021) he was a 2x A finalist. That being said, Pumputis will almost certainly need to better his season best to make it into the A final in the 200 breast this year.

IU freshman Josh Matheny enters as the #6 seed with the 1:50.65 he swam at the Big Ten Championships. That stands as Matheny’s best. Given IU’s history of developing great 200 breaststrokes, Matheny is a real threat to make some and qualify for the A final this year.

Another freshman, Stanford’s Ron Polonsky had an excellent race at Pac-12s, clocking a 1:51.73. That time makes him the #12 seed. Polonsky, a native of Israel, has notably only swum the SCY 200 breast 3 times in his career, 2 of which came at the Pac-12 Champs a few weeks ago. Polonsky was also an Olympian for Israel this past summer in Tokyo.

Chris O’Grady, a USC freshman, enters the meet as the 10th seed with a 1:51.67. O’Grady dropped massively in the event at Pac-12s, making it somewhat uncertain whether he’ll be able to match the performance this week.

Alabama’s Derek Maas has had a phenomenal season under new head coach Margo Geer. He clocked a 1:51.56 at SECs, marking big personal best. While Maas’ 100 breast is a touch faster than his 200, the way he’s been swimming this year, Maas is certainly a threat here.

Darkhorse: AJ Pouch (VT) – Pouch is seeded 26th with a 1:53.01, which doesn’t make him look like all that much of a threat. However, he has a personal best of 1:52.60, which he swam last March. Moreover, and most importantly, Pouch swam a very speedy 2:10.35 LCM 200 breast last summer at the US Olympic Trials, finishing 5th. Notably, in that race, he beat out many of the same people who are in the field at this meet.

After seeing Leon Marchand live mid season I will never pick against him an IM or 200 Fly/Breast in short course.

Even though Whitley has the faster PR, I’m going with McHugh between the two of them. He’s more consistent and doesn’t take blatant extra butterfly kicks on the underwater video, either.

15
-2
Reply
mens ncaa> every other sport

I rlly hope Whitley can somehow get this win. It super crazy to think he was only .5 away from that insane Licon record

I’d love to see Reece get his hands on the wall first.

Matheny gets 3rd, barely slipping under 1:50

I don’t think saying Fallon “didn’t show up” for the final at trials holds any water. Semifinals was his final and needed to have the swim of his life to final, which he did. Licon, Wilson, Fink…etc did just enough to get a lane. Fallon was never going to have a chance in the final. He showed up in the biggest swim of his life and performed lights out. I think he already showed that he can handle pressure on the big stage….