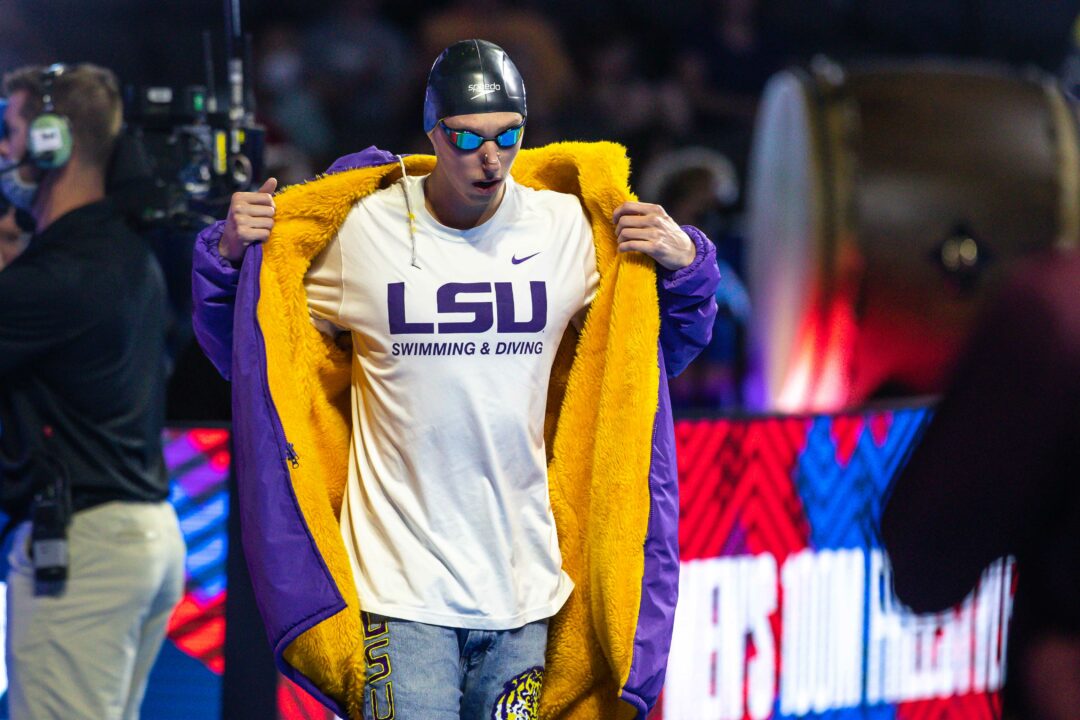 LSU's Brooks Curry leads the NCAA in the 100 free this year and is the newest member of the 40-point club, making him the odds-on favorite for the title. Current photo via Jack Spitser/Spitser Photography

The 100 freestyle is always one of the most highly-anticipated races of the NCAA Championships. This year, the field of competitors is dense with a slight favorite and tons of potential for minor upsets. Let’s get into it.

Before we analyze the field, let’s get one thing straight: no one is touching Caeleb Dressel‘s 2018 NCAA, U.S. Open, and American Record of 39.90. Not this season, anyways. However, fans could be treated to another swimmer or two hitting 40-point anything in the 100 yard freestyle at the 2022 Men’s NCAA Championships.

Louisiana State’s Brooks Curry leads the NCAA in the 100 freestyle this year and is the newest member of the 40-point club after swimming a 40.99 at the 2022 SEC Championships, taking down Dressel’s meet record. Curry is the fastest in the nation by 45 one-hundredths and seems to be riding the post-Olympic wave of success he achieved last summer by making the 2020 U.S. Olympic team and winning a gold medal by way of the 4 x 100 freestyle relay. Curry is also the 2nd-fastest swimmer in the NCAA this season in the 50 freestyle with his 18.67 from SECs, as well as 4th in the 200 freestyle with a 1:31.39. Curry was 41.77 in the 100 free at the 2021 NCAA Championships, meaning he has dropped nearly eight-tenths in the race over the course of this season. Curry is the guy to beat this year in the 100 freestyle. Currently, he ranks 8th all-time in the event, though if he’s able to shave off another 0.24 he will become the 2nd-fastest all-time behind Dressel.

Ohio State’s Hunter Armstrong, another Tokyo 2020 relay gold medalist, is one of this season’s top 100 freestylers and enters the meet with 41.54, good for the 6th seed. Armstrong won the Big 10 Championship titles in both the 50 and 100 yard freestyles this year, and has improved his time in the 100 freestyle by 6 tenths. Though Armstrong is better known as a backstroker, he has emerged as one of the best sprint freestylers in the NCAA this season.

Cal’s Bjorn Seeliger placed 4th in the 100 freestyle at the 2021 NCAA Championships and is the 2022 Pac-12 champion in both the 50 and 100 freestyles, as well as the 100 backstroke. Seeliger is Cal’s best answer to the loss of 2021 NCAA champion Ryan Hoffer; Seeliger placed 2nd to Hoffer in the 50 freestyle in 2021, though he did not swim a third individual event. At this weekend’s NCAA Championships, Seeliger is perhaps Cal’s best bet at an individual victory (alongside Reece Whitley in the 200 breaststroke).

Tennessee freshman Jordan Crooks has blown expectations out of the water this season, becoming the fastest freshman of all time in the 50 and 100 freestyles, posting times of 18.53 and 41.44, respectively, at the SEC Championships. Crooks also has the benefit of a gap year under his belt. Any improvements upon his time and he could become the new favorite to win the 100.

Texas’ Daniel Krueger has the 3rd-fastest lifetime best of all competitors entered in the 100 freestyle, and he has come within 0.19 of that this season, posting a 41.45 at the Minnesota Invite in December. Krueger, along with teammate Drew Kibler, tied for 2nd at the 2021 NCAA Championships, and has given every indication that he is going to again vie for a position near the top of the podium. Kibler, meanwhile, has been well off his lifetime best, set in 2021, but more on him later.

2019 NCAA Champion Dean Farris has been 41.97 this season, 1.17 off of his lifetime best, but quick enough to earn him the 14th seed going into this meet. Farris was unstoppable in 2019, but has been slightly off his best times this season. Even so, a 41-mid will probably be enough to make the ‘A’ final. Looking back at 2019, Farris entered NCAAs with a 41.42 in the 100 free from the Ivy League Championships and ended the meet with a 40.80, a drop of 0.62, making him the 3rd-fastest performer in history. If Farris can improve a similar amount from the 2022 Ivy League Champs to NCAAs, he should finish top-8.

Stanford’s Andrei Minakov is having a breakout freshman season. While Minakov is stronger in the 100 butterfly he did blast a 41.47 leading off Stanford’s 4 x 100 freestyle relay at the recent Pac 12 Championships. Minakov is the former World Junior Record holder in the long course version of this race, and though he’s new to the NCAA this season, he has raced in high pressure situations such as the 100 butterfly final at the 2020 Tokyo Olympics.

Rounding out the Pac-12, Cal freshman Jack Alexy enters the meet with the exact same seed time as House, a 41.77, though boasts a slightly more impressive overall improvement in the event this season with a 0.86 drop from his previous 42.63. House has the benefit of experience while Alexy has the benefit of a slightly less grueling event lineup than House. The pendulum could swing either way with these two, though the points from an ‘A’ final finish would be much more valuable to Cal as they battle with Texas for the team title.

The ACC will be well represented by Matt King and Matt Brownstead, both from the University of Virginia and members of the American Record setting 200 freestyle relay from the ACC Championships. King finished 5th at the 2021 NCAA Championships in the 100 free, while teammate Brownstead won the consolation final, just edging out then-freshman Youssef Ramadan from Virginia Tech, who is having a huge season and enters the meet seeded 8th with a 41.76, faster than both King and Brownstead. Finally, there’s NC State’s Luke Miller, the 7th seed overall. Miller began the 2021-2022 season with a lifetime best of 42.52 and now sits at 41.72 from a relay lead-off leg at the 2022 ACC Championships.

Dark Horse: Nikola Acin, Purdue. Acin placed 8th at the 2021 NCAA Championships in the 100 freestyle, swimming a prelims time of 41.81 to qualify for the championship final. That prelims performance still stands as Acin’s lifetime best, while his current season best is a 42.24, making Acin the 27th seed.

Lasco in the 200 back is definitely Cal’s best shot at an individual title. Not Seeliger or Whitley.

What will probably happen- Dean makes it back but does not place top 4.
What would be really funny (and thus the desired outcome) – Dean wins it all

How fast can Brooks Curry? Depends.. how good of a cook is he?

Not saying I wouldn’t love to see it but he’s more of a 50 guy.
I haven’t seen many swimmers die at around 85 yards but I did at Pac 12s.

I agree with you on the fact that Bjorn is more of a 50 free sprinter. But I think Coleman Hodges said on the podcast that Bjorn apparently shut it down/cruised into the finish on the last 10 yards of the 100yd back 😅… which could mean that he may/may not die on the 100yd free 😅. But I could be wrong. Just heard it last night on the SS Podcast and was surprised to hear that 😂.

P.S. I just want a fun and high octane race to watch 👏🏻

A bit weird putting Crooks at 8th for the 50 but 6th here.

Different authors for each preview have different opinions. I’m sure there’s some editorial input, but I assume the author gets final call on the order they predict.