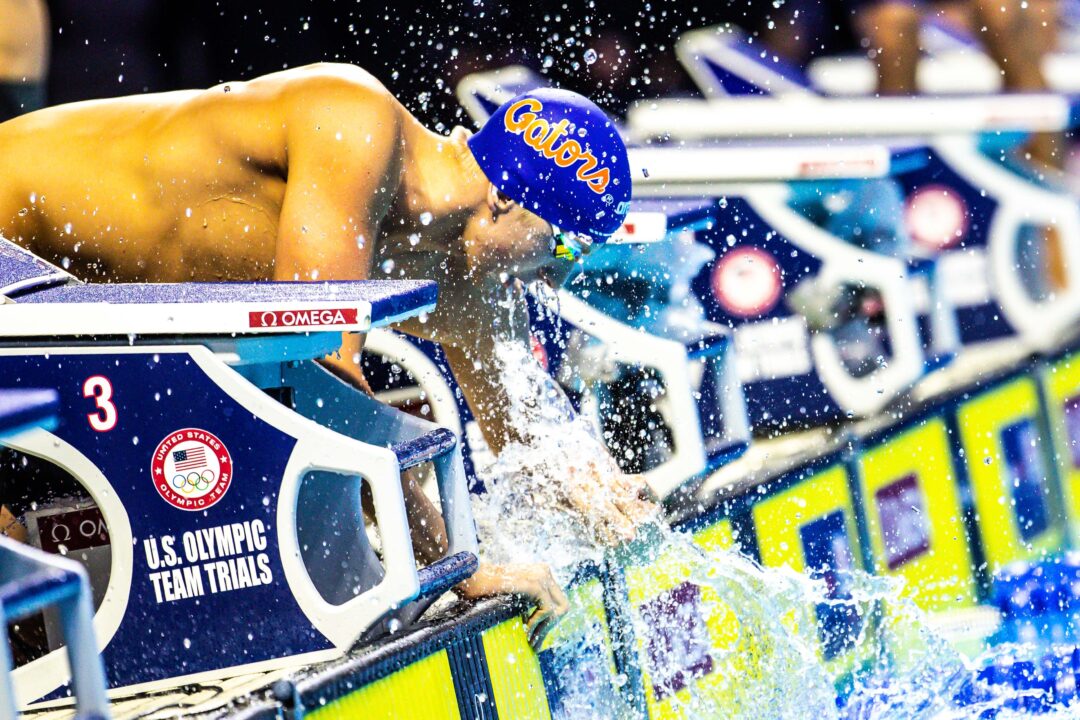 Florida's Kieran Smith enters as the fastest man ever in the 500 free, but will be challenged by defending NCAA champ Jake Magahey of Georgia. Current photo via Jack Spitser/Spitser Photography

The first individual event of these championships, the 500 free, is poised to be a thriller. Six of the eight A finalists, including the two fastest men ever, from a season ago return to the event, and a pair of freshman superstars seem poised to make an impact in their NCAA Championship debuts.

In spite of the stellar field of returners, a pair of freshmen lead the psych sheet. Georgia Bulldog Matt Sates, who joined the team in January from South Africa, has lived up to the hype thus far and comes in as the top seed in 4:09.06. The Texas Longhorns also boast a freshman superstar, with Luke Hobson coming in as the only other swimmer to have been under 4:10 this season, clocking a 4:09.72 at the Minnesota Invite. That swim broke Michael Phelps’ legendary NAG record by nearly 3 full seconds. Sates and Hobson come in as the fourth and fifth fastest freshmen ever, behind only Jake Magahey, Felix Auboeck and Townley Haas.

While the freshmen sit at the top of the psychs, the fastest man ever, Kieran Smith, comes in as the favorite. At last year’s SEC Championships, Smith tied his own records by blasting a smoking 4:06.32, matching his time from the SEC Championships a season earlier. He also won a bronze medal last summer in the 400 free in Tokyo with a 3:43.94 and finished 5th at Short Course Worlds in 400 free in December.

On the other hand, Smith’s SEC rival, Georgia Bulldog Jake Magahey, comes in as the defending champion. At last year’s NCAAs, Magahey and Smith dueled in a thrilling race with Magahey holding off a hard-charging Smith to 4:07.97 to 4:08.07. Since winning that NCAA title, Magahey had a quiet long course season and missed Georgia’s midseason invite before returning to finish third behind Sates and Smith at the SEC Championships last month. That effort was strong enough to put him fourth heading into this meet with a 4:10.22.

Arizona fifth year Brooks Fail comes in as the 5th seed in 4:10.32 from Arizona’s midseason meet. Fail was almost two seconds off of his season best as he finished runner-up at Pac 12s, demonstrating that he likely is saving his best spring racing for these championships. He also has a strong history of performing well at these championships, having swum over a second faster than his seed at the last two NCAAs. Fail finished third in this event last season with a 4:09.54 after setting a lifetime best of 4:09.41 in the prelims. Preston Forst, the Stanford sophomore who won the Pac 12 title, comes in as the 8th seed in 4:12.06.

The ACC champion, NC State junior Ross Dant, comes in as the 6th seed with his 4:10.35, two full seconds faster than he was at these championships a year ago when he finished 8th.

There are also several low-seeded swimmers to keep an eye on in the early heats, including a pair of A finalists from last year who will swim before the circle seeded heats even get under way. Last summer’s 800 and 1500 Olympic champion Bobby Finke, who missed the SEC Championships due to health and safety protocols, comes in as the 33rd seed with a 4:15.21. Finke finished 6th in last year’s final with a 4:11.11. Cal 5th year Sean Grieshop comes in just ahead of Finke in the 29th seed with a 4:14.84. Grieshop finished 7th last season with a 4:11.82.

A third Florida Gator comes in with A final potential, with junior Alfonso Mestre holding the 7th seed in 4:11.26. Mestre’s season best came at Florida’s midseason invite and he was over two seconds off of his time during his fourth place finish at last month’s SECs. There are several B finalists from last year’s meet returning as well, including Trey Freeman, Grant Shoults, Patrick Callan and Alex Zettle. Callan holds the highest seed of that quartet, coming in as the 11th seed at 4:12.60, while Shoults holds the fastest lifetime best of group, having swum a 4:10.02 at the 2018 NCAAs.

Dark horse: Jake Mitchell, Michigan. It seems at least a little strange to name someone who made the US Olympic team in the LCM equivalent of this event as a “dark horse,” but Mitchell hasn’t yet seen the success in the SCY 500 that he has in the LCM 400. He comes in as the 12th seed after posting a lifetime best of 4:12.88 at the Big 10 Championships last month. As a freshman last year, Mitchell went out extremely fast in 47.99 and then fell off hard to finish nearly 5 seconds off of his seed and out of scoring range entirely. With another year of experience, including major international racing, under his belt, Mitchell may be primed for a SCY breakout.

Your bet came up fourth! Not even close!!!

I have Finke fourth and Mitchell fifth, Mestre out of the final
Otherwise good picks

David Johnston will be in the discussion. Gabriel Jett also.

The 500 at NCAA’s. It’s the swimming equivalent of the rings at the Olympics. None of the glory, but all of the scary.

3
0
Reply
Inside Smoke
Reply to  Hswimmer

That is exactly what he placed last year. He’s also referred to the 800 as a sprint in the past so I’m pretty sure the 500 is his equivalent of a dive and glide

7
0
Reply
mds
Reply to  Inside Smoke