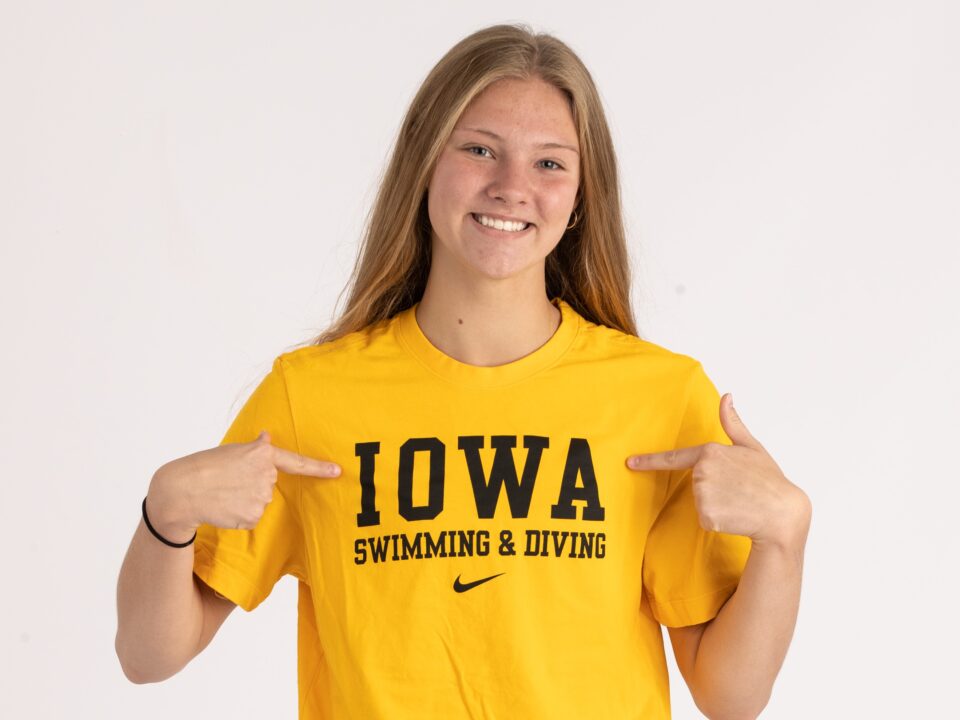 Johnston's Olivia Swalley (pictured) won the 200 IM and 100 breaststroke for the third year in a row, while Waukee dominated the team standings. Current photo via Brian Ray, Iowa Athletics

Johnston senior Olivia Swalley won the 200 IM for the third year in a row. With a time of 1:58.59 in finals, Swalley demolished Emma Sougstad’s state record from 2012 after tying it in prelims (2:00.33). Swalley was almost six seconds faster than second-place Mallory Kell (2:04.20).

Swalley also completed another three-peat, this time in the 100 breastroke. She touched the wall at 1:01.50, over two seconds ahead of Wakuee’s Willa Hage. The swim was just off Katherine Ross’ state record of 1:01.18, set in 2012.

Nora Kemp, a junior for Waukee, was also double-event winner. She took first in the 200 freestyle with a time of 1:48.85, which marked her first time breaking 1:50.0 in the event. She also took first in the 100 free, narrowly edging Lin-Mar senior Hayley Kimmel by 0.16 hundredths to touch the wall at 51.08.

Kell, a senior for Waukee, took first in the 100 fly in a close race against Davenport Central’s Hannah Cousins. Cousins led at the halfway point by 0.20, but Kell managed to out-split her in the final 50 by 0.33, taking first with a time of 55.71.

Swalley, Kimmel, and Kell are all signed to the University of Iowa for next fall. Kemp has also announced her verbal commitment to Iowa, but will arrive in 2024.

Kemp (24.42), Hage (24.11), Taylor Judas (24.12), and Athieno Wandera (24.04) then took the title in the 200 freestyle relay for Waukee in a final time of 1:36.69, nearly two seconds ahead of Davenport Central. Lauren Valleroy of Davenport Central narrowly held off Dowling Catholic’s Julia Sweetman, who anchored with a 23.86. Ankeny’s Caroline Walker had the fastest split of the event, anchoring their sixth-place team with a 23.29.

1:58/1:01 will probably be faster than the top Hawkeye this year. Looks like she could be a gem.