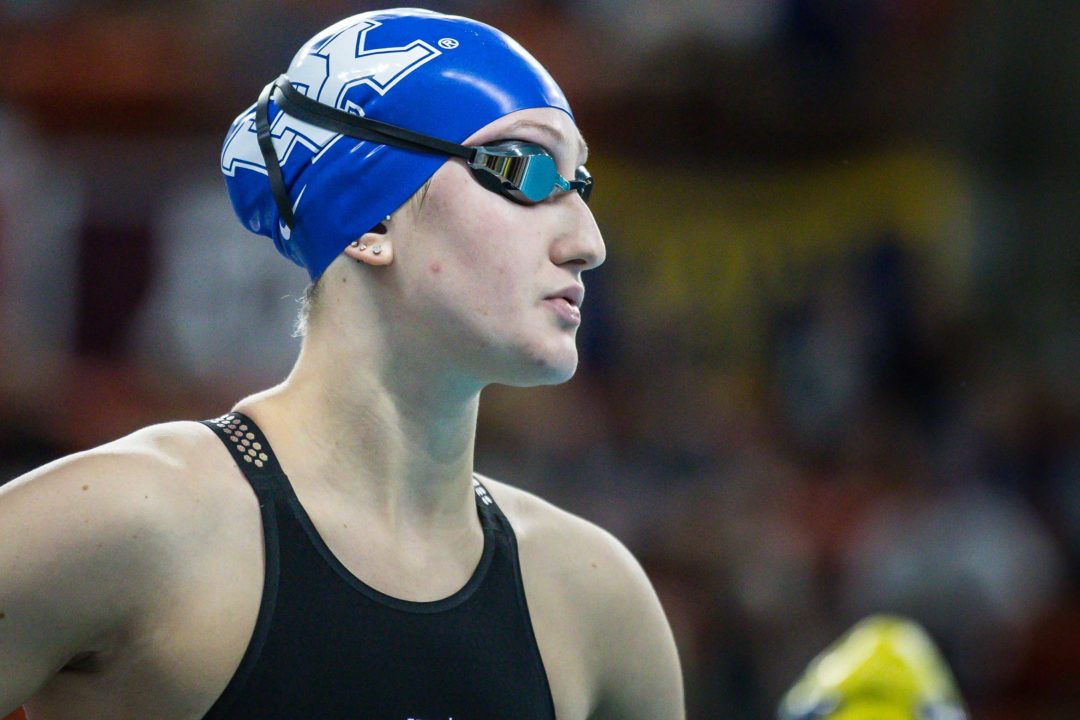 Izzy Gati was one of eight Kentucky swimmers to qualify for an 'A' final during Day 3 prelims at the Women's SEC Championships. Archive photo via Jack Spitser/Spitser Photography

Before diving into this morning’s prelim results, let’s first get a refresher on where we stand in the team race through two days of competition.

With Thursday’s 3-meter diving scores factored in, Florida holds an 83-point advantage on Georgia, with several teams on the Bulldog’s heels in the battle for second.

On Friday morning, Kentucky had a standout performance by putting 18 swims into scoring position for tonight, including eight in ‘A’ finals.

Lauren Poole led the way for the Wildcats in the 400 IM, qualifying first overall in a personal best time of 4:06.84, while senior Bailey Bonnett went over five seconds under her seed time to take sixth.

In addition to the 400 IM, they also put three swimmers into the 100 back ‘A’ final, including junior Parker Herren (seventh, 53.14) who didn’t even make their SEC roster each of the last two seasons.

Alabama had a strong session as well, putting seven through to ‘A’ finals including a pair in the 100 fly, 200 free and 100 breast, and Florida, Georgia and Tennessee weren’t far behind with five apiece. Texas A&M notably has nine swimmers set to compete in ‘B’ finals.

Scoring out the prelims, Kentucky holds a sizeable advantage with 322.5 points, followed by Alabama, Florida and TAMU. The top-six teams all keep themselves in the hunt, while Arkansas, who was buoyed by a standout diving showing yesterday, looks to be falling out of the hunt for a top-six finish.

Kentucky’s charge projects them to be right on Florida’s heels after tonight’s session.

Exactly WOW! Looks like the UK team was smart to not lay so much on the line to win dual meets. UT killed them in the Jan dual meet with the LADY VOLS suited, while UK swam through the meet. Great championship mindset on the part of Coach Jorgenson, one of the truly GREAT people and coaches on deck – anywhere! Could the Kats pull off the unthinkable and pass UF on the last day??? The most exciting SEC meet in many years.

Yes, I’m very impressed with Coach Jorgensen. From a distance it seems like he runs an excellent squad

I recall when he started at Toledo and thinking that he would go far at a major program. He’s doing a great job at Kentucky!