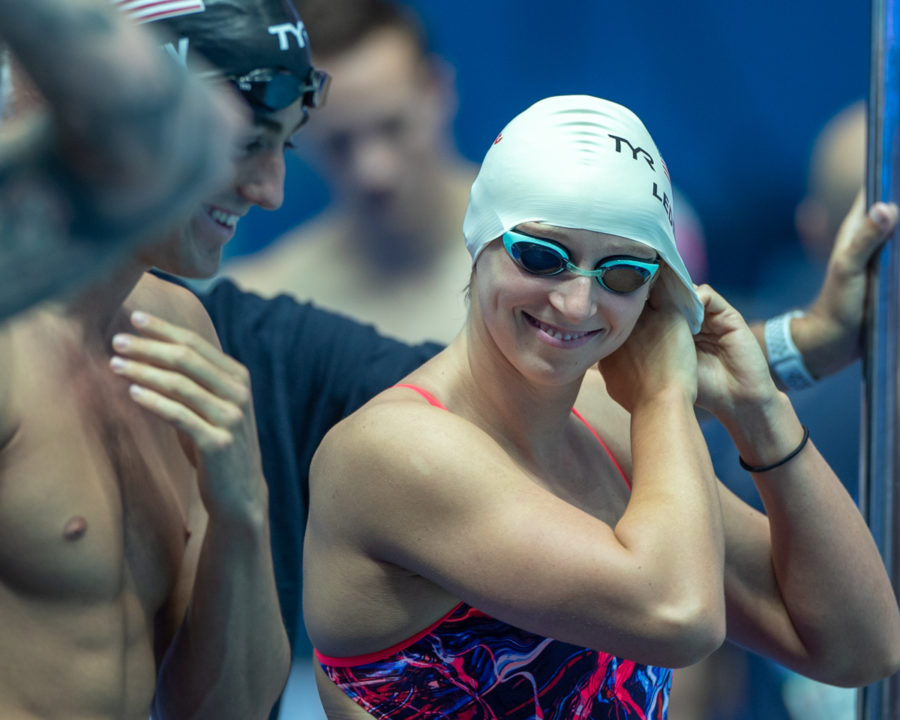 Katie Ledecky will be chasing her 3rd-straight Olympic Gold in the women's 800 free this summer, and the Trials will be her first stop on that journey. Stock photo via “Rafael/Domeyko Photography”

Katie Ledecky will be chasing her 3rd-straight Olympic Gold in the women’s 800 free this summer, and the U.S. Olympic Trials will be her first stop on that journey. Just as she is in the women’s freestyle events 200m and up, Ledecky is heavily favored in the 800, having been faster just this season than anyone else in the history of the sport. Ledecky is the defending Olympic Trials champion, 2-time defending Olympic Champion, 4-time defending World Champion, World Record Holder, Olympic Record holder, American Record holder, and US Open Record holder in the event. Ledecky hasn’t lost an 800 free final since sometime around when fire was discovered, and that doesn’t appear likely to change anytime soon.

This is arguably Ledecky’s best event, and it’s the event where she burst onto the world stage back in 2012, winning Gold at the London Olympics at just 15 years old. Hold onto your hats, because the stats here are simply incredible. Ledecky has the 23 fastest times in history in the event, and her World Record time of 8:04.79 is over 9 seconds faster than the next-fastest person in history – Rebecca Adlington (8:14.10). The next-fastest American historically is Janet Evans, who had a career best of 8:16.22 in 1989.

Ledecky currently ranks 1st in the world this year by nearly 7 full seconds, despite her season best being 9 seconds off her lifetime best.

Ledecky is the clear favorite to win the race at Trials, and unlike the women’s 1500 free, the race for 2nd isn’t nearly as open. That’s because Leah Smith, at least as things stand entering the meet, is the clear #2. Smith is the defending runner-up in the event from 2016, where she went on to finish 6th at the Olympics in the race. She’s also won a Bronze medal in the 800 at the World Championships before (2017), and was the bronze medalist in the race at the 2018 Pan Pacs as well.

Leah Smith‘s top event historically has been the 400 free, which she’s earned Olympic and World Championships medals in, but her 200 and 800 frees are very close behind. Smith comes in with a lifetime best of 8:16.33, which makes her the 3rd fastest American all-time in the event, and the 10th fastest performer in the world all-time. She’s the only swimmer other than Ledecky in this Trials field to have broken 8:20 before, and she’s been the 2nd-fastest American both in the qualifying period, and in this season. In fact, Ally McHugh was the 3rd-fastest swimmer during the Trials Qualifying period, and her time is just shy of 10 seconds slower than Smith’s best.

It seems likely that Ledecky and Smith will once again be the American duo in the 800 at the Olympics, but it’s not entirely out of the question that somebody else could pop up. But that’s not to say Smith is a lock for the 2nd slot. If Smith isn’t under 8:20 at Trials, there are any number of swimmers who could sweep in and get their hand on the wall 2nd. Going off of lifetime bests, first on that list would be McHugh, who has been as fast as 8:24.22. It would take a significant drop for McHugh, or any of the swimmers beyond Ledecky and Smith for that matter, however, it’s certainly possible we will see big drops in this event.

Ashley Twichell, 32, enters the meet with the 4th-fastest lifetime best – 8:25.31. Twichell has already secured a spot on the Olympic roster in the women’s open water events. She’s also fresh off winning the national title in the women’s 5k back in April. Twichell’s a slightly better 1500 swimmer than 800 swimmer, though she’s a strong contender to make the 800 final, and if she swims a best time, she could certainly find her way to a 2nd place finish.

Arizona State swimmer Emma Nordin swam her lifetime best earlier this month, clocking an 8:27.44 at the Indy Pro Swim Series. She’ll be seeded 8th with the swim, and given her improvement so far this year, she got a great shot at making it to the final. It would take another big drop to have a shot at finishing in the top 2, but if she continues on her 2021 trajectory, it may in the cards.

Recent Michigan grad Sierra Schmidt is the 6th seed in the event, and has made both the US National Junior and National teams in it previously. Schmidt also swam a lifetime best at the Indy Pro Series in May in the 1500. She’s also coming off a highly successful senior season with the Wolverines.

Haley Anderson is another name to watch out for. The 29-year-old has been as fast as 8:24.13, but it was swum just outside the qualifying period. Anderson hasn’t been under 8:27 again since swimming her best time in summer 2018, but she did recently post a season best 8:28.84 on May 30th at the Speedo Grand Challenge meet in Irvine. She’ll need a repeat performance to make the final in this event at Trials, but if she gets in, she’d have a shot at a high finish.

Emma nordin. Is my pick for the second spot

Of all competitions at Trials (male/female) this particular one will be the least where a surprise can be expected.

At 800 Leah Smith will swim her designed rhythm not carrying much about competition. The target 8:20 – 8:22 is doable and is well out of reach for other contenders.
At 400 the situation is quite different. It will be the race between Smith and Nordin. Leah hardly can ignore Emma who is expected to be well ahead at half way. That is how Nordin swam her last two races this season – very strong first 200. If Smith stays with her race plan no matter what she may win unless Nordin improves significantly her fresh personal best. But actual race can change everything and the wisdom of well designed plan can be forgotten.
The situation can be… Read more »