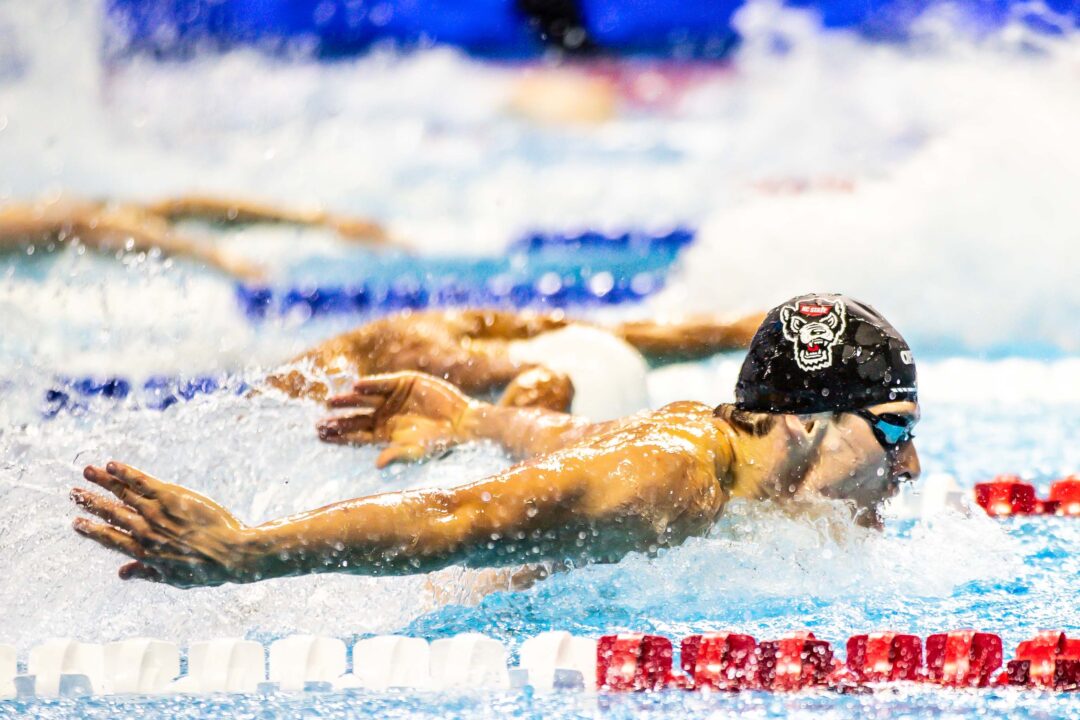 The penultimate finals session of the Wave I meet is about to be underway, featuring the 400 free, 100 fly, and 200 back. Current photo via Jack Spitser/Spitser Photography

The penultimate finals session of the Wave I meet is about to be underway, featuring the 400 free, 100 fly, and 200 back. The timeline of tonight should be roughly the same as last night – an hour.

Things will be kicking off with the women’s 400 free, where ASC’s Malia Rausch will be attempting to add a 2nd event to her Wave II schedule. Rausch won the women’s 200 free last night in a photo finish. She enters tonight’s final as the 4th seed, but has been significantly faster before than she was this morning.

The prelims of the men’s 400 free were relatively tame, with Ivan Kurakin posting the top time this morning. None of the men were under the Wave I standard this morning, but assuming this race shakes out like the 200 free yesterday, we should see a lot of improvement tonight.

Tennessee’s Trude Rothrock had an excellent swim in this morning’s women’s 100 fly, dipping under 1:00 for the first time. She led the morning heats at 59.64, with Nikki Venema also swimming under 1:00. Carl Bloebaum, who had an incredible men’s 200 fly on the first day of the meet, will attempt to win the men’s 100 fly tonight to add a second event to his Wave II schedule. The men’s 100 fly field is tight tonight, with all 8 men within about 0.9 seconds this morning.

Bayley Stewart, a Notre Dame swimmer, posted the top time in the women’s 200 back this morning by a significant margin. Colby Mefford, who earned a spot in Wave II in the 200 fly already, will be taking his shot in the 200 back again tonight.

Ohio State’s Sally Tafuto swam her race perfectly, roaring into the leading on the final 100 of the race, and shattering her personal best. Tafuto entered the meet with a lifetime best of 4:16.05, marking an improvement of over 2 seconds today. She nearly even split the race, swimming a 2:06.62 on the first 200, and 2:07.36 on the back half. She completed the race with a 1:03.08 on the final 100.

Malia Rausch was in a battle with 15-year-old Addie Sauickie throughout the race, and was able to pull even with, and overtake, Sauickie on the final 100, just as Tafuto did. Rausch was the 200 free champion last night, and has now earned a second event for the Wave II meet.

Ellie Marquardt, who is a Princeton swimmer competing for TAC, posted the 2nd fastest time of finals tonight, winning the B final in 4:14.56. Unfortunately, because she was in the B final, she was unable to advance to Wave II in the race.

For the first time at the Wave I meet, the B final winner posted the fastest time in the field. Eli Shoyat blew away his previous best, and roared out to a lead over the rest of the B final. He touched in 3:55.75, touching as the only swimmer in the event at this meet to break 3:56.

The two swimmers who will be advancing are Triton Aquatic Club 21-year-old Ivan Kurakin, who also earned the top seed in prelims this morning, and Sandpipers’ Brice Barrieault, who was swimming down in lane 8. Kurakin was in the lead essentially from start to finish, and although it looked like he would get caught on the 2nd-to-last 50, he managed to kick it into gear on the final length, and touch first.

Nikki Venema was electric on the back half of this race, pulling ahead through the final 50 to leave no doubt she would punch a ticket to Wave II. The swim was a huge lifetime best for Venema, undercutting her previous best of 59.86. If she can replicate the time in prelims of Wave II, she may just be able to sneak into the top 16.

Virginia’s Lexi Cuomo got her hands on the wall 2nd by just 0.03 seconds, also earning her way to Wave II. After swimming a personal best in prelims, Cuomo took another 0.04 seconds off the time, and will have another shot at it in a week.

In a very tight final, Micah Slaton and Aaron Sequiera’s well-timed finishes led them to the top times in the heat. Both Slaton and Sequeira swam lifetime bests in prelims and finals today, and both came in under the Wave II cut. Carl Bloebaum, who won the 200 fly decisively earlier in the meet, was left just outside advancing to Wave II in another event. However, Bloebaum still swam a lifetime best tonight, and came in under the Wave II standard, for what it’s worth.

16-year-old Mitchell Ledford from Treasure Coast won the B final in a new personal best of 53.58. The swim ties Ledford for 10th all-time in the 15-16 age group.

Top seed heading into finals, Bayley Stewart, nearly negative split the race tonight, flipping in last place at the 50 and 100m marks. Stewart was out in 1:06.65 on the first 100, and came home in 1:06.70, touching just off her lifetime best for 2nd. Sophie Brison, on the other hand, led the race from the 2nd 50 on through the rest of the race. The swim for Brison marks a best time by 0.6 seconds. Both women will be advancing to Wave II in their first event thanks to that swim.

B final winner Tori Buerger posted a 2:14.12 to win the heat, which would have been 3rd in the A final.

Despite a massive lead at the 100 mark, Indiana University’s Jacob Steele, the 100 back champion, was unable to hold onto his lead, slipping to 4th on the final 50. Colby Mefford, on the other hand, was in dead last at the 100 mark, and turned on the jets coming home, roaring to a new lifetime best. The swim was a best for Mefford by well over a second, and if he can be under 2:00 again at Wave II, he may be able to advance to the semifinals. Mefford also will be competing in the 200 fly at Wave II, thanks to his 2nd place finish in that race on day 1.

Blake Hanna also had excellent closing speed, posting the 2nd fastest split in the field on the last 50. For what it’s worth, Hanna also had impressive reaction time on the start, getting off first in just 0.53 seconds.

He’s next week in wave 2, as are most of the swimmers you probably know

So what happens if a swimmer finishes Top 2 in two events and announces today that they will not be swimming one of those events at Wave II?

Seems like they scratch an event…no new additions though.

I think the bigger question might be if someone chooses not to go or cannot go (I have not read what the rules/selections say will happen then).

Good point, but this is likely a smaller possibility since the Wave II meet follows directly after the Wave I meet at the same location.

Have anyone put together a list of the swimmers who have moved on to Wave 2 and in which events they have cuts?

Wave 1 swimmers can only swim the events in Wave 2 that they placed top 2 in. Making the meet from wave 1 does not bring in all Wave 1 times only the events in which they had top 2 times

Multiple stickers on SwimSwam have said that making 1 Wave II cut allowed the dinner to swim all of the events they have either q time in.

I don’t think dinners will be allowed to swim at wave 1. I also think JimSwim22 should learn to proofread. 😀

That explains all the steaks floating around the warm up pool.

Wrong. They can swim all their events at Wave II if they placed top 2 in at least one event at Wave I

Argh for Beisel when she starts the heat off with saying “none of these athletes have qualified for Wave 2” and then immediately has Mefford having gotten 2nd in the 2fly earlier in the meet at the end of the race (not to mention that Steele had already made it as well).

Like rowdy never messed up lol Beisel can once

Beisel must have learned too much from Rowdy, she is constantly talking about which way someone is breathing

I think that’s an NBC thing. This makes sense to a non swimming audience, but to actual swimmers we know it doesn’t matter that much.

If it effected winning that much people would be breathing every 3 in races and no one on that level does.

These swimmers are not mostly unknown if you have followed any of the large USA and collegiate meets for the past couple of years.

What’s the actual and objective of these wave I Olympics Trials?

Surely it cannot be to select swimmers for the Olympics?

Can someone explain to me?

To “cleanse” the body of Texas tap water.

The purpose of Wave I is to have USA Swimming fulfill their promise to these swimmers, which is if they meet the Olympic Trials Time Standard during the qualifying period, they will be allowed to compete at this meet. The pandemic forced USA Swimming to change the format in order to comply with lockdown and social distancing rules which were in place at the time of the announcement of this plan. Creating Wave I is a bit of a compromise. These swimmers may not be at the meet where the Olympic team is selected, but they are competing at the Olympic Trials.

And let’s face it – competing at the Olympic Trials is a BIG thing for a big majority of swimmers, their first taste of the real big time.

Hopefully Stollings can get more LC experience, i think although underwaters are his strong suit he is still good on top of the water and could transition well. Not sure if he has easy access to a LC pool if two years ago he was driving 100 miles round trip to practice.