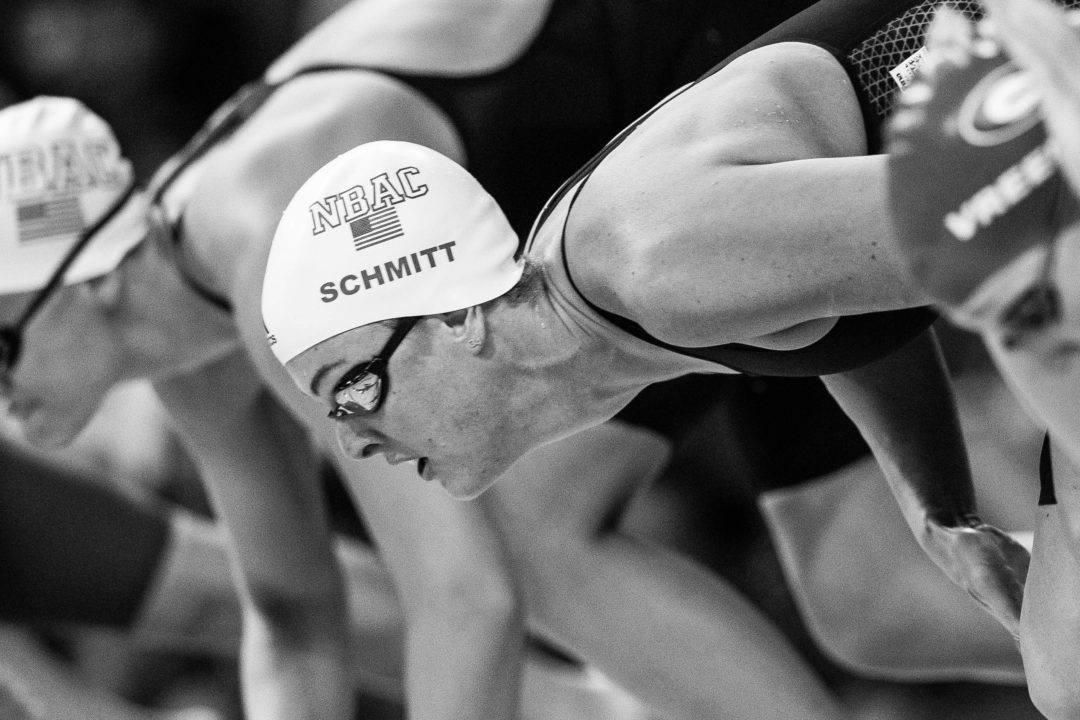 Katie Ledecky is almost certainly going to win this, but there is a largely familiar cast of characters vying for the second individual spot. Current photo via Mike Lewis/Ola Vista Photography

Let’s get the most obvious pick out of the way: barring illness or some sort of unforeseen catastrophe — say, a random meteorite blasting a whole through the roof of the Chi Health Center and obliterating the touchpad at the end of her lane — Katie Ledecky will win this event in Omaha. She owns the fastest time in the US this year by over two and a half seconds, with a 1:54.40 from the Mission Viejo PSS meet a month ago. For those of you keeping track at home, that swim tied the U.S. Open Record, was faster than her winning time from the 2016 Trials, and it was actually faster than her split, with a flying start, on the 2019 World Championships 4×200 free relay, during a week in which she was battling illness.

Suffice it to say, Ledecky looks dialed in. Behind Ledecky, though, the race for 2nd seems wide open.

2012 Olympic gold medalist Allison Schmitt has had her ups and downs over the last few years, but she has the 2nd-fastest time during the Olympic Trials qualifying period, with a 1:56.01 from the 2020 Knoxville Prop Swim Series stop. Lest you forget, Schmitt not only currently shares that U.S. Open Record with Ledecky, from the 2012 Olympic Trials, but she also holds the American Record with her 1:53.61 victory in London, which has to rank among one of the most impressive swims of the post-supersuit era. That was a long nine years ago, and there’s no telling for sure what she’ll do next month, but if she’s on, she has as good of a chance as anyone as grabbing that second spot.

Simone Manuel won two individual medals in Rio in the sprint frees, but she swims up to this distance. She swam this at 2016 Trials, finishing 7th, and she seemed to be on a strong improvement curve, pre-pandemic. In 2019 she clocked a personal best by nearly a second with her 1:56.09 leadoff on the 4×200 free relay at Worlds. She hit 1:56.92 in early 2020, but she doesn’t have a single official swim in the event since then. Still, it’s hard to imagine her not swimming at Trials.

While Katie McLaughlin came out of high school primarily known for her butterfly, she’s emerged as a stalwart in this event as well, having been part of the US 4×200 free relay three times at major international meets since 2015. Her best time during the OT qualifying period is a 1:56.48 from the Santa Clara International meet.

Speaking of swimmers emerging from other strokes, backstroke ace Olivia Smoliga has suddenly burst onto the scene as a relay contender, at least, after dropping a 1:57.04 at the Atlanta Classic earlier this month. Heading into this year, she hadn’t been faster than 1:59.02, and before 2019, she had registered a single swim in this event since 2011. We’re not sure if she’ll actually swim it here, since the semi-finals are moments before the finals of the 100 back, arguably Smoliga’s signature event. We’ll mention here that Regan Smith is in a similar boat; she holds a lifetime best of 1:58.44 from two years ago, but is the World Record holder in the 100 back, and will surely be focusing on that event at Trials.

Beside Smoglia, another ten women have been in the 1:57-range during the Trials qualifying period, and the contenders for the rest of the top six spots in this event seem likely to come from these ten.

Madisyn Cox threw her name into the (ten gallon) hat with a 1:57.38 at last week’s Longhorn Invite, hitting a new lifetime best. She’s primarily known as an IMer and breaststroker, but she did swim on this relay at the 2017 World Championships, going 1:59.92 in prelims. We’ll see if she ends up swimming this event, since she’s a favorite in the 200 IM as well, later in the same session, but that 1:57.3 may be enough to get her relay consideration even if she doesn’t swim it individually.

Like Cox, Melanie Margalis has a great shot of qualifying in the 200 IM, so she may or may not swim this event. She did in 2016, when she finished 6th with a 1:57.65 and made the Olympic Team, then finished off the double by placing 2nd in the 200 IM. We’ve seen Margalis take on some Herculean efforts at Pro Swim Series meets, so it seems like the odds may be that she’ll do the double.

UVA’s Paige Madden just missed out on the 2019 World Championships team after finishing 8th at the 2018 Summer Nationals, but she’s been steadily improving since then. She swept the distance freestyle events at this year’s NCAA Championships, then clocked a lifetime best 1:57.47 at the Indianapolis PSS stop last month.

Finishing 3rd at those 2018 Nationals was former Michigan swimmer Gabby DeLoof, who made the Pan Pacs and World Championships teams with a 1:56.55 that summer, still her lifetime best. She won the 100 free individually at the 2019 World University Games, but hasn’t made much noise since then. She’s only been under 2:00 twice each of the last two seasons since 2018.

Georgia Bulldog Hali Flickinger is yet another swimmer with experience on the 4×200 free on the world stage, having been part of the squad the 2017 World Championships. She’s been 1:57.65 during the qualifying period, with that time, also her lifetime best, coming at the 2019 Bulldog Grand Slam.

Like Manuel, former Volunteer Erika Brown is more of sprinter who swims up to this distance. Her lifetime best of 1:57.68 comes from the 2019 U.S. Open, and she was 1:59.69 last month in Indianapolis.

When there’s up to six spots available on the team via this event, there’s a long list of other swimmers we haven’t mentioned yet who could be in the running. Mallory Comerford has a lifetime best of 1:56.95 from 2017, and was 1:57 in both 2018 and 2019. Meanwhile, teenagers Torri Huske (1:58.09) and Justina Kozan (1:58.10) have both recently hit lifetime bests that could put them within striking range of a spot.

Dark horse: Emma Weyant (best time – 1:58.36) – While she’s best known for her 400 IM, we’ve seen plenty of other IMers pop off a good 200 free at Trials (e.g., Gunnar Bentz), and Weyant’s now two years removed from her lifetime best of 1:58.36. Like Margalis and Cox, she may choose to focus on the 200 IM, but if she goes after a relay spot here, it wouldn’t take that much of a drop for her to challenge for a lane in the final.

Could a Smoliga or Regan Smith elect to swim in the Wave 1 meet to establish a 200 Free time, then swim their regular events in the Wave 2 meet? Would that do them any good, while avoiding a possible dreaded 200 Free-100 Back problem?

If you have a Wave 2 cut, your only choice is to swim at the Wave 2 meet.

Tori huske, Madison cox, Melanie Margalis, Leah smith and Emma nordin will most likely probably be on the team before the 200 free and thus already swam be the 800 free relay in Tokyo.

Madison Cox will already have swam the 400 IM… Read more »

I think hali has been looking good this year and I could see her sneaking into top 8. Maybe even into top 6.

Watch out for Ashley Strouse of SAC, she could make some waves in the event as well…

Claire Rasmus is not a current college swimmer like the article states. She finished her eligibility in 2019.

Don’t count out Huske to make top 6 and get on the relay. She has been increasing her range this year and could possibly put up a 1:56 high.

Depends if she feels like she is on with her breaststroke. Freestyle, check. Fly, check. Back, check.

Given the agglomeration of swimmers around 1:57 heading into the meet some of these presumptive names will fail to advance past semis. There are usually surprises. There may be some bolters. Bar Ledecky the others will likely need to go all out during semis. I will not be surprised if some go slower in the final than in the Semi but still make the team (6 from 8 aren’t bad odds).

It means that 1:57 can still be enough to be selected for relay.

Listed in alphabetical order not necessarily in order of finish.

Cox, Margalis opt out of the event to focus on the women’s 200 meter individual medley.

0
-12
Reply
Smith-King-Dahlia-Manuel
Reply to  Sam B

Keep up with current events: